A roundup of deep-think articles. On America’s long goodbye from global involvement, the coming Mideast wars, Israel and the liberal order, protecting and preserving Area C, why Arabs hate Palestinians, anti-Semitism in the Democratic Party, American Jews’ failure of imagination, and life choices: moving from resume values to eulogy virtues. 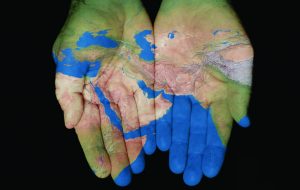 One of the joys of the Jewish holiday season is the opportunity to disconnect from hourly news broadcasts and instead read long-form, substantial essays. Here is a roundup of recent deep-think articles on US and Israeli foreign policy, Arab politics and Israel-Diaspora relations.

America’s long goodbye: With US President Trump this week greenlighting Turkey’s takeover of northern Syria, it’s worth reading Prof. Eliot A. Cohen’s essay in the pages of Foreign Affairs (February) which tracks and mourns what is rapidly emerging as a new consensus on both the American left and right: that the US should accept a more modest role in world affairs. “Trump is not the sole cause of the United States’ increasingly erratic, shortsighted, and selfish behavior. He has merely accelerated a trend – that of Washington’s retreat from its global responsibilities – that was already developing by the time he took office and that will outlast him. Indeed, this trend is only likely to continue, since its roots lie not in passing political events but in the extinction of the living memory of World War II, a world-historical event that revolutionized US foreign policy and shaped its course for most of the twentieth century.”

Mideast war is coming: Again in Foreign Affairs (October), President Obama’s Mideast coordinator Robert Malley argues that conditions for an all-out war in the Middle East are riper than at any time in recent memory. He whitewashes Obama as a “gradualist” and argues that Trump’s policies make likely the very big military confrontations he is determined to avoid. What Malley does well is detail the flashpoints in the region and how the US could act to reduce the chance of regional war that would inevitably involve the US.

Is Israel abandoning the liberal order? Israel has been remarkably successful in blending ethnic nationalism and realpolitik national defense with liberal democratic kinships. And yet, in an off-base 7,000-word essay in The Washington Post (September), conservative historian and strategist Robert Kagan snipes at Israel that it is cuddling up to authoritarian forces in the world, embracing anti-liberal nationalism and endangering American Jews. Fortunately, in Mosaic Magazine, Hillel Fradkin of the Hudson Institute demolishes Kagan’s broadside as a “defective, superficial, and misleading account of the ‘liberal order’ and its decline, yoked to a confusing, unjust, and somewhat nasty attack on the State of Israel and its current leaders, especially Prime Minister Netanyahu.”

Protect and preserve Area C: The man who was the settlement adviser to the past three ministers of defence, Kobi Eliraz, writes in the July issue of Hashiloach that Israel must administer Area C effectively and with much more authority, whether it wishes to either hold the territory as an effective card for future bargaining or it intends to annex the lands to Israel. He warns that Israel has mostly stood limply by as the PA moves aggressively to assert its dominance in critical C zones – with the support of (mainly European) foreign actors hostile to Israel’s present or future administration of these areas. The lawlessness that currently pertains in Area C does serious and, in some cases, permanent damage to natural resources, the environment and the quality of life for Israeli and Palestinians on both sides of the Green Line.

Why Arabs Hate Palestinians. Writing for the Gatestone Institute in September, Arab Israeli journalist Khaled Abu Toameh says that in recent months Arab criticism of the Palestinians has escalated and turned ugly, focused on how Palestinians have proven to be constantly ungrateful toward Arab states. “You simply cannot burn pictures of the Saudi crown prince one day and rush to Riyadh to seek money the next. You cannot shout slogans against the Egyptian president one day and go to Cairo to seek political backing the next.” Other Arab writers express outrage over Palestinian opposition to the anticipated Trump peace plan, accusing the Palestinians of losing countless opportunities, with the “Deal of the Century” possibly the “last, best chance to achieve a Palestinian state.”

The Democratic Party is becoming unsalvageable. Liel Leibovitz writes in Tablet (August) about the “unthinkable descent of the US Democratic Party into anti-Semitism; not just blind to anti-Jewish bigotry, but an engine of it.” He quips that “just because Trump said it doesn’t mean it’s not true. We have to stop talking about preventing the Corbynization of the Democratic Party, because it is already here.” Leibowitz points to the Democratically sponsored H.R. 2047 currently before Congress, which purports to promote “Human Rights for Palestinian Children Living Under Israeli Military Occupation,” but is in fact a modern blood libel against Israel. “If the history of anti-Semitism teaches us anything, it’s that when blood libels appear, real violence isn’t far to follow.”

American Jews: A failure of imagination? In the fall issue of the Jewish Review of Books, Daniel Gordis of Shalem College in Jerusalem warns that American Jews have lost a sense of peoplehood and any real commitment to religion or Torah, and instead assumed an identity that is focused on little but politics. “Yet as a form of politics, Judaism has, so far, found little to say that is uniquely Jewish.” Gordis asks: “When Judaism becomes nothing but politics, what remains of the moral conflicts, the self-conscious cognitive dissonance that is at the heart of rabbinic literature? Where are the echoes of the perennial struggle between the universal and particular? Where is the balance between a sense of humankind’s grandeur and the inconsequentiality of our lives?” And how, he asks, can American Jews possibly connect on a deep level with Israeli society, where vibrant new strains of national-traditional and spiritual identity are developing?

Your professional decline is coming (much) sooner than you think. Arthur V. Brooks, president of the American Enterprise Institute, explains why he is resigning at a young age in this long, erudite and widely read essay in The Atlantic (July). In short, Brooks is pushing work out of its position of preeminence in his life – sooner rather than later – “to make space for deeper relationships can provide a bulwark against the angst of professional decline.” “Decline is inevitable,” he writes, “and it occurs earlier than almost any of us wants to believe. But misery is not inevitable. Accepting the natural cadence of our abilities sets up the possibility of transcendence, because it allows the shifting of attention to higher spiritual and life priorities.” To move from resume virtues to what he calls “eulogy virtues” is to move from activities focused on the self to activities focused on others.  He presents an abundance of research which strongly suggests that happiness – not just in later years but across the life span – is tied directly to the health and plentifulness of one’s relationships.