With 18 days to go, I say that Israelis deserve better than the empty invective and detached sloganeering served-up by its politicians in this election campaign. 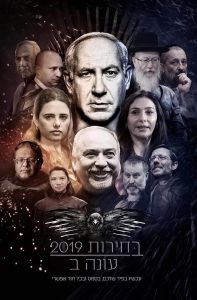 Israel is a great country sizzling with creativity, making great contributions to the world in arts and science; a nation of believers; an anchor of stability in the chaotic Middle East.

Inspired Israeli leadership should be able to harness our energies to tackle outstanding problems without poisoning public discourse or taking voters for fools.

And yet, in the current election campaign, our politicians are doing just that: spewing invective and taking Israelis for fools. The campaign reminds me of the ad that Prime Minister Netanyahu’s Likud party ran before the spring election which portrayed the Knesset as a kindergarten with selfish and squabbling toddlers.

As a result, most Israelis share an antipathy for this do-over election campaign, I think. It’s boring, ugly, unnecessary, and unlikely to lead to a decisive result. We can expect the lowest-ever voter turnout in Israeli history. It’s hard to look forward to any specific result, other than being done with it all.

Before the April election, many analysts called this the year of political upheaval. After all, Prime Minister Netanyahu was pegged with three pending criminal indictments and four top generals were neatly lined-up to overthrow him. Yet, the spring vote gave us a year of stagnation, not revolution.

In other words, the core sociological-political divides in Israel remain quite constant. These are mainly explained by a combined income-ideological gap – Israel’s version of identity politics; and by the long shadows of the failed Oslo accords and the fearsome Arab state meltdown.

Israelis have internalized that that there are no magical solutions to their big challenges in the security, economic and societal realms; no fairy-tale diplomatic gambits worth taking; and no better magician to handle it all than Benjamin Netanyahu, for the meantime – although his charms are wearing thin.

Which leaves us with nothing more than empty diatribes and detached sloganeering in the current campaign; a thin cover for inertia and lethargy in Israeli politics. Our politicians are selling us libels and fallacies instead of tackling real issues with concrete policy solutions. This is true of almost every party, as follows:

Likud: All-of-a-sudden, Netanyahu and his lieutenants are promising right-wing voters the early application of Israeli law to some/all settlements in Judea and Samaria. This matter was raised repeatedly in the outgoing Knesset but deferred repeatedly by Netanyahu.

The prime minister hasn’t leveled with his voters. He is clearly opposed to sweeping Israeli annexation of the West Bank for demographic and diplomatic reasons. Instead, he is now hinting that in the face of never-ending Palestinian rejectionism, and if he gets a green light from the Trump administration, he will secure Israel’s long-term settlement assets in parts of Judea and Samaria in some limited legal way. In Hebrew they say ashrei hamaamin, happy is the hearty believer.

Blue & White: Lt. Gen. (res.) Benny Gantz would have us believe that he knows how to deal better than Netanyahu with Hamas in Gaza. He would bomb Hamas leaders to kingdom come, pulverize their missile emplacements, obliterate their military facilities, etc., etc…. and then just win the war. So simple. Gantz and company (Bogie Yaalon, Gabi Ashkenazi, Yair Lapid, Avi Nissenkorn…) are basically mum on every other concrete issue. But they promise us clean government, even though the five of them already are busy backstabbing each other.

Yisrael Beytenu: Avigdor Lieberman has absolutely no workable ideas for drafting Ultra-Orthodox Jews into the military, although he has made this the centerpiece of his campaign. Throughout his career, he has partnered with and pandered to haredi politicians. Now we are supposed to believe that he will become the great savior of secular Israel, working assiduously to roll-back haredi influence in the public sector. Yeah, sure.

Democratic Party: The foul-mouthed Ehud Barak and wild-mouthed Stav Shafir (along with Nitzan Horowitz of Meretz) are running on angry steam; fire and brimstone aimed at “Netanyahu the crook,” and not much else of substance. Like Blue & White, they promise honest political representation, but their list won’t last a week past election day.

Labor: The only campaign slogan that Amir Peretz, Orly Levy-Abecassis and Itzik Shmueli could agree upon is the nebulous beni adam lifnei hakol, which ridiculously translates as “human beings before everything else” or “people, above all.” Say what? Their website waxes breathlessly about “leadership, vision and priorities,” and is backed by a socio-economic platform that is pie-in-the-sky Marxism with no specified sources of revenue.

(And note: The next Israeli government, in any coalition configuration, will be forced to slash spending and raise taxes, because outgoing Finance Minister Moshe Kachlon has run-up a big budget deficit. Austerity is coming. All election campaign promises will go mostly unfulfilled.)

Yamina: This is another technical block formed for the election that won’t last long. Ayelet Shaked is rightfully aiming high at national leadership in a post-Netanyahu era, which inevitably means jettisoning the hot-heads and rabbis in the National Union and Jewish Home factions, and perhaps leaving Naftali Bennett behind too. Alas, her chances of being justice minister again in the next government are slim, and therefore her campaign would be more honest if it focused on other issues.

Joint (Arab) List: For the first time, Ayman Odeh is talking about joining a Zionist (left-wing) government, but this is a bamboozle. It will never happen, nor is he serious about it. Odeh is floating this falsity to reverse the steep decline in Arab voting. If Israeli Arabs know the Joint List will sit in opposition with little influence on any matter, why bother to vote? (But when Arab voters see a chance to make a difference, like in municipal elections, they do vote in high numbers.)

Otzma/Noam/Zehut: These three hard-right splinter groups are running independently of one another and are unlikely to cross the electoral threshold, squandering perhaps 150,000 ballots. They could be responsible for the inability of Likud to form a “natural” coalition government without Gantz and Lieberman. What a waste.

Have you seen the Noam party kids on the street corners with their “To be a Normal Country” banners? With their wild peyot, soup-bowl-sized kippot, and purposefully unkempt attire they are least normal-looking political activists you can imagine; and their approach to politics amounts to banging one’s head against the wall.