Democracy in Israel: Alive and well

Disregard feral, foul and false talk that slanders Israel. Israeli democracy is not “shattering” nor are we facing the “darkest days Israel has known.” These are venal, absurd claims – spewed from the mouths of desperate politicos on the extremist fringe. 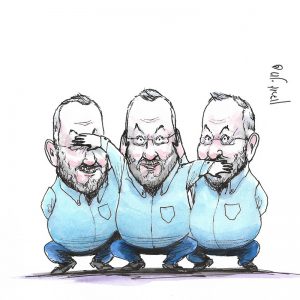 Who said recently that “Israeli democracy is dying in broad daylight”? That “dark and dangerous ultra-nationalists are undermining the foundations of Zionism and Israeli democracy”? That Prime Minister Benjamin Netanyahu is a “fascist” and his diplomatic polices are leading to “apartheid”?

Who said that if the right-wing again wins the upcoming elections, “Israel’s liberal underpinnings will be replaced by nationalist-theocratic ideology,” or “a blazing inferno will ultimately consume Israeli democracy itself,” and Israel will then “face a dark and ominous future”?

Was that Alexandria Ocasio-Cortez, Jeremy Corbyn or some anti-Zionist, self-hating Jew in Austria?

Alas, no. The above expectorations are from the disheveled Israel “democratic” party founder Ehud Barak and a series of hot-headed, hard-left columnists. They’re out to “save” Israeli democracy by defeating Netanyahu and returning “sanity” to the Knesset.

In the process, all forms of character assassination are kosher. Any type of brutish demonization of Israel and Israel society is acceptable. It’s perfectly fine, apparently, to delegitimize Israeli society and democracy – if this weakens Netanyahu at the polls. It’s okay to emasculate Israel’s global standing by feral, foul and false talk – if this helps bring Netanyahu down.

Beware this doomsday discourse about depredations in Israel’s democratic moorings. Israeli democracy is not “shattering” nor are we facing the “darkest days Israel has known.” These are venal, absurd claims – spewed from the mouths of desperate politicos on the extremist fringe.

Such vehement denigration of the Likud and its right-wing offshoots, and unrestrained use of near anti-Semitic and pseudo-BDS language about Israel and Netanyahu – is unacceptable. (Of course, the same principle applies in the opposite direction, meaning that extremist invective hurled against the political Left by the Right is dangerous and deplorable.)

The bottom line is that Israeli democracy is far haler and heartier, and Israel’s right-leaning and religious majority far saner, than the critics would have you believe.

IT’S TRUE THAT the outgoing Knesset passed a series of nationalist legislative initiatives.

These relate to cultural and educational issues, like spending more shekels on arts communities in the periphery, high school curriculum changes in civics and Jewish-Zionist heritage studies, and keeping “Breaking the Silence” out of the school system. Also to constitutional matters, like the Nation State law, and reform of the judicial appointments process. And to political initiatives, like a crackdown on illegal Bedouin and Arab building, tougher prosecution of terrorist family members, NGO financial transparency, and more.

But none of the above proves the charges of fascism or the undermining of Israeli democracy. Not at all.

(And note: In comparison to the United States, where the tenor of politics these days is terribly poisoned, Israel is the sane and stable democracy!)

Let’s say, for example, that the next Knesset breaks up the Labor Party’s kibbutz-controlled food cartels, or it passes a law mandating compensation for absentee Palestinian landlords for land on which Israelis have been living for forty years (instead of expelling such Israelis from their homes).

Would that be the end of democratic Israel? Of course not!

What if the next Knesset amends the law to give a re-elected Netanyahu immunity from prosecution while in office, even retroactively? Would that too be the end of Israeli democracy? No, it wouldn’t. As a matter of principle, it would be bad policy (and I wouldn’t vote for this), but it might be understandable in the political moment.

When the High Court of Justice ruled in favor of Netanyahu government policies on natural gas exploitation and on expulsion of illegal African migrant workers (while circumscribing some aspects of the attendant legislation) – policies that were strenuously opposed by the left – was that the end of Israeli democracy? Many Israeli politicians said so, and here again they were wrong.

It is critically important how we approach the public policy debate. It is wrong to portray Israeli society as bisected by two enemy narratives: that of a moral, liberal, democratic, universalist Israeli Left, versus an immoral, illiberal, isolationist, nationalist Israeli Right. That is an artificial dichotomy. It’s an untrue picture of Israeli society.

Like Britain, France, Germany and the US these days, there is a real and worthy debate in Israel over important public policy matters, and there is a continuum of respectable views that defy simplistic categorization as democratic or anti-democratic.

It’s important to acknowledge this, and to abjure accusations that every controversial policy innovation is motivated by hatred, moral insensitivity or authoritarianism.

Over-the-top attacks make the political opposition sound just as crude and intolerant as the caricature of the government they are critiquing.