The progressive assault on Israel

A look at the dangerous intellectual trends in America that have catapulted Ilhan Omar and “American Corbynism” to prominence. 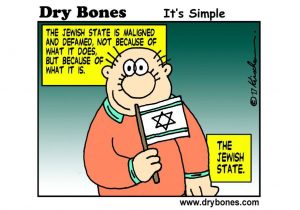 One can’t turn on the news these days without getting hit by Congresswoman Ilhan Omar’s shpritz of anti-Israel and anti-Semitic statements, and debate over the anemic Democratic Party response to them.

Five recent important articles take a deeper look at the progressive assault on Israel, offering perspective on the intellectual trends in America that have catapulted Omar and her ilk to prominence.

Stephens then warns of a simplistic and deep flaw in progressive thinking on Israel, “the flaw that has resulted in this efflorescence of bigotry” – the assumption that Israel’s choices toward the Palestinians are quite easy. It’s just a matter of stopping settlement construction, reaching a reasonable settlement with the Palestinians, making peace, and living relatively happily ever after, right?

“But this is a caricature, and it’s one that quickly descends to calumny: That is, the idea that Israel’s failure to make the ‘right’ choice is proof of its boundless greed for Palestinian land and wicked indifference to their plight.”

In Tablet Magazine, Liel Leibovitz argues that the rot runs even deeper, with the left repeating Christianity’s most dangerous historical mistakes.

“With its emphasis on social justice, criminal justice reform, elevating the poor, and rejecting the rapacious policies of the greedy and the affluent, progressivism sounds a lot like Christianity. Except that it has chosen to reject Christianity and all other forms of faith as silly superstitions…” and to set up instead a religion that believes in “progress.”

“Israel provides progressivism’s zealots with a convenient opportunity to mask their theological decrees as rational, reasonable, and worldly politics. By focusing all of your attention, energy, and rage on the Jews, you may declare yourself to be the rightful heir to an enlightened tradition abandoned by those who were once God’s chosen people but who are no longer.” Leibovitz calls this “progressive replacement theology.”

Indeed, Leibovitz says that progressives are claiming that they, somehow, are the new and much better Jews. And he asks: Can you become Jewish merely by rising one day and declaring yourself affiliated with the Jewish people and with “tikkun olam” (the supposed the true essence of Judaism) – as has NY congresswoman Alexandria Ocasio-Cortez?

“Can you then commit all your energies to arguing that the Jews are the only people on earth undeserving of a state in their national homeland, where they have lived continuously for nearly three millennia? And are people who oppose progressivism un-Jewish, even if they observe Jewish rituals daily, study Jewish texts, and lead dedicated Jewish lives?”

“What we’re seeing right now, then, is the strange spectacle of progressives pursuing the same thorny theology that much of Christendom abandoned long ago, the theology of supersessionism.” And they act this out by attacking the world’s only Jewish state.

Also in Tablet, James Kirchick warns that “Corbynism” (British-style radical socialism, named for Jeremy Corbyn’s Labour Party conquest) is coming to America. Kirchick points to Senator Bernie Sanders and the Democratic Socialists of America as vanguards of this extremist trend.

American Corbynism takes after its British provenance with hostility toward Jews and Israel. “A critical element of the trans-Atlantic Corbynista project is to knock Jews down a few pegs in the progressive victim hierarchy… Antagonism toward the only liberal democracy in the Middle East is like an acid test for wanting to reduce American global power and influence… Attacking the Jewish state is the means by which they express their broader antipathy toward American exceptionalism.”

In Commentary Magazine, Joshua Muravchik provides an example of how far this discourse has taken hold on the extreme left of American Jewry, in a devastating dissection of the organization called Jewish Voice for Peace (JVP).

A collection of mostly Jewish ideologues of the radical left who realize that their lineage affords special leverage in attacking Israel, JVP exists “only to give a kosher stamp to attacks on Israel.” It has devoted special attention to encouraging churches to embrace the BDS movement. And in almost every recent controversy involving accusations of anti-Semitism, the organization has stepped forward to defend the alleged anti-Semite.

Muravchik: “Nowhere does JVP evince any genuine interest in Judaism or in the well-being of the Jewish people or any reverence for the accoutrements of Jewish life – holidays, prayers, ceremonial garments, Hebrew words – that it appropriates as props or adornments in its impassioned campaign for Palestinian vanquishment of Israel.”

“If the use of ‘Jewish’ in its name is opportunistic, the use of the word ‘peace’ is entirely disingenuous. JVP derides what it refers to as ‘so-called peace talks.’ It declines to spell out an alternative path or the end it seeks, declaring itself indifferent to the details so long as the Palestinians’ ‘right of return’ is achieved. There might be one state or two, it says, but in this formula all will be Arab-dominated. The Jewish state will disappear, and this will constitute the end of racism, the birth of democracy, and the fulfillment of Judaism.” (sic.)

Finally, in a lengthy blog post for The Times of Israel, Daniel Gordis of Shalem College in Jerusalem skewers those American Jews who are out “to save Israel from itself,” and who engage in Israel-bashing under the cover of Israel-helping.

“A Reform Congregation in America should ‘save Israel’ before it is too late? Does no one see the hubris (and the humor, frankly) in such a suggestion? Who are these people who are being urged to save Israel? How well do these people know the country they’re being asked to save?”

“Can they name five Jewish communities along the Gaza border and speak about how they’re different? How those communities see the conflict? They cannot, of course, as very few have spoken at length to people trying to raise their families in Sderot or Sha’ar HaNegev, and thus they have no real idea what life is like there.”

“Do American Jewish progressives ever ask themselves what they know that Israelis do not? Or, more likely, is the bottom line they care about their progressive credentials much more than they care about Israel? These people are not partners for Israel, but rather posturers – for their own American progressive socio-political agenda, and Israelis intuit that.”

“A lot less hubris, and bit more interest in why Israelis think what they think, would go a long way to making sure that somehow, in some manner, the Israel-Diaspora partnership survives.”