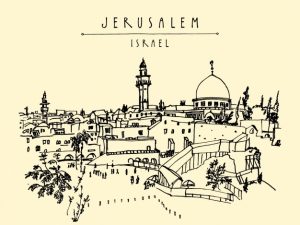 Radical Islamic groups, foreign actors, and Palestinian authorities have stepped-up their subversion of Israeli sovereignty in eastern Jerusalem. This includes covert and overt activities, both legal and illegal, ideological and concrete, in the civilian and security spheres.

The next Israeli government must act with alacrity to re-assert its hold on the city.

According to a breathtakingly frightening expose by Dr. David Koren of the Jerusalem Institute for Strategy and Security, foreign troublemakers are becoming ever-more brazen and omnipresent. They have little interest in improving the lives of Jerusalemite Arabs, but to rather seek to undermine Israeli administration of the city. And some of the bad actors pump messaging supportive of terrorism against Israel and Jews.

Koren warns that Hizb ut-Tahrir (the Islamic Liberation Party), which advocates the establishment of a global Islamic caliphate, has both sleeper and active cells in the city. It runs a “modesty patrol” throughout eastern Jerusalem to enforce compliance with Islamic religious law, including a ban on drinking alcohol and checks on fraternization between the sexes.

The nefarious intensifying intervention in eastern Jerusalem of Recep Tayyip Erdogan’s Islamist-oriented Turkey is shocking too. Erdogan’s former chief of staff personally oversees much of this activity, which includes trips for youth to radical Islamic conferences in Turkey, and the bussing to Jerusalem of gangs of men and women who harass Jewish visitors on Har HaBayit.

Then there is considerable Turkish funding for renovation of Moslem institutions in the city, holiday handouts, women’s organizations, leisure and cultural events, youth activities, and social networking which glorifies terrorists and explicitly calls for violent resistance to Israel.

As a result, Turkish flags today fly everywhere in eastern Jerusalem and prominently on the Temple Mount too; so much so that Saudi Arabia and Jordan have complained to Israel (and warned Israel) about the Turkish encroachment in Jerusalem – Koren says.

The European Union actively subverts Israeli sovereignty in the city by funding NGOs on the Israeli far-left and Palestinian groups affiliated with the PA; by building physical projects in eastern Jerusalem as an alternative to Israel; and by fighting political battles for Arab Jerusalemites regarding building rights and more. The EU also is campaigning for the reopening of the once-active Palestinian Chamber of Commerce, closed by Israel, as the Palestinian Authority’s business arm in Jerusalem.

Fatah, Hamas, the DFLP, PLFP and even the outlawed Northern Branch of the Islamic Movement also are more active than ever in eastern Jerusalem, seeking to thwart any cooperation between Israeli municipal authorities and Arab Jerusalemites.

PA agents apply heavy pressure on parents against registering their children for schools that teach the Israeli high school matriculation curriculum. Fatah agents acts to sabotage any and all Jerusalem municipality projects aimed at benefiting the Arab residents of the city, including infrastructure, building, welfare, education and sports services.

The PA belligerently brands such Israeli municipal initiatives as “Zionist plots” meant to “uproot the Palestinian character” of the city.

Koren: “As a rule, the PA takes aggressive and violent action to prevent Jerusalemite Arabs from behaving as residents of the city with equal rights and duties. It seeks to prevent healthy interaction with the Israeli government and its institutions and with Israeli society in general.”

Analysis of the PA budget books show that it is spending over NIS 60 million a year on forbidden government-like activity in Jerusalem, including land battles with Israel, “supervision” of weapons, hosting of overseas delegations, aid for families of prisoners and “martyrs,” sports clubs and schools.

ISRAEL MUST TAKE foreign challenges to its sovereignty and rule in eastern Jerusalem seriously. The foreign assault must be met by an Israeli counter-assault. Mainly this means intensive civilian investment in the eastern part of the city.

The outgoing Netanyahu government and Jerusalem municipal administration of Nir Barkat made a good start on this, passing a five-year NIS 2.1 billion masterplan for eastern Jerusalem infrastructure, education, planning and building, sports, employment, health and welfare.

This is the right approach, since, Koren says, since foreign intruders are most active in civilian fields and geographic areas where Israeli presence and activity are inadequate. Israel has a strategic interest in providing enhanced and accessible municipal services to Jerusalemite Arabs, instead of the foreign actors.

Koren: “The struggle for sovereignty in Jerusalem has transitioned from ‘Jerusalem on High’ – meaning, high-powered political summits in Oslo and Annapolis, to ‘Jerusalem of Below’ – meaning, the conduct of daily life in the city.”

“The real limits to control and sovereignty in Jerusalem are not determined in clandestine talks between unnamed high-ranking officials, but rather by demarcating the area of ​​activity of the municipal street cleaner, the youth counselor at the local community center, the building inspector, the road engineer, the policeman and the social worker, who provide services for the residents and are clearly identified with Israeli institutions.”

Beyond this, Koren says that Israel must treat challenges to its hold in eastern Jerusalem as a matter of acute national security and craft an integrated, inter-ministerial approach; crack down on illegal foreign financing; and revise and rigorously enforce the law which bars the Palestinian Authority from governmental activity in Jerusalem.

For many decades, Israeli governments ignored the situation in eastern Jerusalem, because the assumption was that the mainly Arab parts of the city would one day be forked-over to Arab administration. So why invest there and why police it too aggressively?

But a conservative-nationalist Israeli government that intends to keep the city whole can no longer relate to eastern Jerusalem and Arab Jerusalemites in the same way. It must invest in and police eastern Jerusalem – for the greater good of both Arab and Jewish residents of the city, and to secure the national goal of keeping united Jerusalem as the capital of Israel.