Invest in your Israeli wine palate 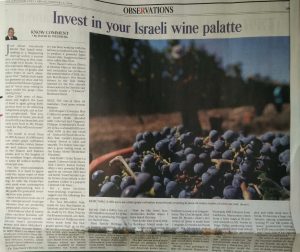 Just about everybody knows that Israeli winemaking is a burgeoning start-up sector; a success story as exciting as this country’s high-tech boom. To me, this represents Biblical prophecy come true; of grapes and other fruits in such abundance that “Judah shall wash his garments in wine and his clothes in the blood of grapes” and of “every man resting in peace under his grape vines and fig trees.”

After 2,000 years of desolation and neglect, the Land of Israel is again giving forth glorious fruit to its returning indigenous people, just as Ezekiel prophesized: “But you, mountains of Israel, you shall shoot forth your branches, and yield your fruit to My People Israel; for they will soon come” (36:8).

The result is more than 60,000 dunams (15,000 acres) now under grape cultivation – in the Galilee, Golan, Samarian and Judean mountains, in the Sharon and Samson plains, and in the heights of the northern Negev, resulting in some 40 million bottles of wines per year.

For the wine-uninitiated, however, it is hard to appreciate the many types of wine and know which to start drinking. So with the Purim-Passover peak wine consumption season approaching, here is my guide for graduated investment in your palate.

Start with wines from one of six entrepreneurial boutique wineries that are producing pleasurable, diverse wines.

Nevo Hazan’s winery (Nevo) at Moshav Mata in the Jerusalem mountains has produced the zestiest Merlot of 2016. Sasson Ben-Aharon’s Five Stones winery in the Elah Valley (named for the five smooth stones selected by David to slay Goliath) boasts a “Virtuous” Bordeaux blend.

Next, try one of these six mainstays from more veteran wineries.

For a more exclusive wine-drinking experience, I suggest one the following five premium wines.

The Tura Mountain Peak, made by Erez Ben-Saadon in Rechelim, and the Gvaot Masada, made by Dr. Shivi Drori in the Binyamin region, are classically-balanced Bordeaux-style wines made from the best grapes grown high up in the Samarian mountains. They are best served with hearty meat dishes or Shabbat cholent.

Betty’s Cuve and the Vintner’s Barrel from Ari Erle’s Bat Shlomo winery are special treats, available in limited quantities but worth seeking-out. Grab a bottle, too, of the Semillon-sourced Ice Wine that Ari is producing this year for the first time.

Flam Family Heritage is a unique expression of five grape varietals crafted by Golan Flam in the 2015 shmita year, available only at Ben-Gurion airport. The Psagot Peak, made by Ya’acov Oryah north of Jerusalem, is an outstanding Syrah-Petite Sirah-Mourvedre savory blend.

Now for the three best, world-class kosher wines I have tasted this year.

First is the Yatir Forest 2012, a Bordeaux blend made by Eran Goldwasser, sourced in the southern Hebron hills and crafted in the northern Negev. It is mouth-filling with hints of chocolate and mint.

Finally, I was privileged to taste the majestic Mayacamas Vineyards 2013 Cabernet from California. Mayacamas comes from a truly magical 125-year-old vineyard on Mt. Veeder in Napa Valley, producing some of the world’s best fruit (which in turn makes for age-worthy wines).

The grand philanthropist and Judaica collector Jay Schottenstein made Mayacamas kosher (– thank you, Jay!), giving the kosher world the deepest, boldest, most complex and virile wine ever, I think. It’s become a huge cult favorite among sommeliers, scoring 97 out 100 points in many professional tastings.

For $180 you can own a bottle of the Mayacamas 2015 Cabernet, which will go on sale in April – and cellar it for a special occasion 20 years hence.