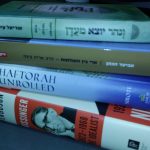 It’s become a tradition for newspapers to publish lists of the best or most popular books of the past year. Very few of these lists have included the types of books I am reading on Israeli and Jewish matters (including Torah commentary). So here is my admittedly narrow list of best books, published in either English or Hebrew, some by small publishers that are often overlooked.

With the passing of former ambassador and defense minister Arens last week, it’s appropriate to highlight this trim memoir. Arens recounts his early role in the birth of Israel’s aerospace industry, and his relentless drive to keep Israel secure. He recaps the Lavi jet fight, First Gulf War, struggles with the Bush-Baker team, and his opposition to the Gaza disengagement and to West Bank withdrawals. (brookings.edu/book/in-defense-of-israel)

This important and timely book exposes the Palestinian campaign for everlasting refugee-dom and rips into UNRWA for perpetuating the Palestinian dream of destroying Israel. The authors finger the international community, the Israeli government and the IDF for prolonging the destructive refugee ethos, which is the biggest obstacle to peace. The book must be published in English soon! (kinbooks.co.il/page_29873)

Ostensibly, this incisive book seeks to explain to Palestinians why Jews have returned to Zion and how Israelis see the Arab-Israeli conflict. I sense that the book really is aimed at progressive Jewish youth in the Diaspora who have no clue why Zionists are so committed to the nationalist-religious project of building and defending Israel. (harpercollins.com/9780062844934)

This is a second collection of the recently-deceased columnist’s most important works, spanning the personal, the political and the philosophical. (The first was Things that Matter, published in 2015). It includes a fierce essay about the effect of today’s populist movements on the future of global democracy. A good reminder of what made Krauthammer a celebrated and influential American commentator. (penguinrandomhouse.com/books/606169)

I’m rolling with the crowd in praising this book. It has been declared one of the 2018 best by The New York Times, Wall Street Journal and Economist. The author delves into extensive newly-available material such as cabinet transcripts to show how Churchill’s fundamental values of courage, tenacity and moral conviction drove his wartime leadership. (penguinrandomhouse.com/books/533764)

Harvard’s Ferguson is the closest thing we have to an official biographer of Henry Kissinger. This 1,000-page volume cover the less-known years of Kissinger’s upbringing and academic career, from his flight as a child from Hitler’s Germany to his appointment as President Nixon’s national security advisor. It’s an epic biography with compelling takeways about American politics and foreign policy. (penguin.co.uk/books/55374/kissinger)

This Jerusalem-based philosopher offers a counterweight to the prevailing political correctness that considers the resurgence of nationalism in the West as cause for alarm. He presents Israel and the US as examples of healthy societies in which both national identity and individual liberty flourish, and he roots this in Biblical values. (basicbooks.com/titles/yoram-hazony/the-virtue-of-nationalism/9781541645387)

An examination of the poor combat performance of Arab armies and air forces in virtually every Middle Eastern war, from the Jordanians and Syrians in 1948 to Hizballah in 2006 and the Iraqis and ISIS over the past decade. Behavior patterns emphasized by Arab culture, along with politicization of the military and societal underdevelopment explain Arab defeats. (oup.com/academic/product/armies-of-sand-9780190906962)

This is the third volume in a brilliant young scholar’s exposition on Jewish holidays from a theological perspective. Eitam, who is deputy dean at the hesder yeshiva in Yeruham, views almost every Jewish tradition and all the holidays as an effort to return to the Garden of Eden; to repair the ruptures and overcome the spiritual contamination that courses through life and human history since the primordial sin. His exposition is revolutionary and original, written in very clear modern Hebrew. (nahar-meeden.yhy.co.il)

Rabbi Bina’s life took him from the elite yeshivas in Lithuania, to Zionist agricultural farms in the 1930s, to Egypt, Libya and Greece in service of the Haganah, to the deanship of Netiv Meir yeshiva high school in Jerusalem – a flagship institution of Religious Zionism. Among that school’s alumni are hundreds of professors, scientists, journalists, politicians, military men, and religious leaders that span a wide spectrum (including me). Rabbi Bina’s magic? His emphasis on moral scruples, religious modesty, intellectual rigor and the obligation to contribute to Jewish renaissance in Zion. (ybook.co.il/book/7395)

The Hebrew edition of this masterful study combines midrash with contemporary scholarship (using modern techniques of literary analysis) to reveal deep strata of textual and religious meaning relating to leadership, redemption, identity, and social morality. It traces society’s downward trajectory during the era of the Judges and its ascent during the era of Davidic monarchy. (korenpub.com/maggid_he_ils/maggid/ruth.html)

Many shul-goers pay little attention to the ‘haftorah,’ which is sort-of an add-on from the prophets to the core Torah reading. This beautifully-written volume offers a modern line-by-line translation of the haftorahs with deep and often uplifting analysis. The author almost always finds relevant insights for today’s personal and national challenges. (torahforum.org/haftara)

The Hebrew edition of this halachic masterpiece has long been awaited by devotees of Rabbi Tabory’s “Brisker-style” analysis, drawn from the weekly Torah reading. He quickly arrives at the fundamental “chakira,” the logical point upon which the discussion hinges, and applies that insight to various practical legal questions. (I was privileged to be Rabbi Tabory’s student, and wish him strength). (korenpub.com/maggid_he_ils/the-weekly-mitzva-1465.html)

Rabbi Dr. Eitam Henkin was a prolific young historian and halachic scholar until he and his wife Naama were gunned down by Palestinian terrorists three years ago. A manuscript he left behind has become this new book, which details the halachic repertoire of Rabbi Epstein on the background of late 19th century European intellectual and societal ferment. (korenpub.com/maggid_he_ils/great-gifts-new-raleases/new-releases-maggid/taaroch-lefnei-shulchan.html)

Until he passed away in 2002, Zerach Warhaftig was the last man standing – the oldest signatory to Israel’s Declaration of Independence. He worked with the Japanese Consul Chiune Sugihara in Lithuania to issue visas which saved thousands of Jewish lives during the Holocaust. He was elected to the first Knesset; was Minister of Religion for 15 years representing the National Religious Party; and was board chairman of Bar-Ilan University. He is famous for quipping that he viewed the State of Israel’s achievements as “more than I expected but less than I hoped for.” (booknet.co.il/prodtxt.asp?id=113488)