Published in The Jerusalem Post and Israel Hayom, December 28, 2018.

Here is my advice to Likud how to approach Israeli voters in a way that will elucidate and uplift, and perhaps win the race: Focus on the concrete diplomatic and defense challenges looming ahead, and highlight Likud’s strong leadership team, beyond Netanyahu. (Next week: My campaign advice to Benny Gantz and Bogie Yaalon). 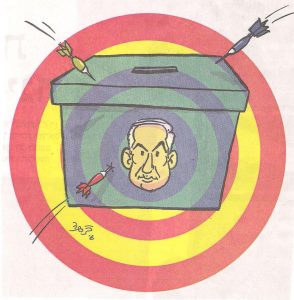 The coming Israeli election campaign will be ugly. So much invective, radical rhetoric and negativity is ahead – all of it cynically hyped and exaggerated for political purposes. Ugh.

Is it possible to run a serious, intelligent, and positive campaign? In a series of coming columns, I intend to offer advice to each of the main contenders on how to approach Israeli voters in a way that will elucidate and uplift and perhaps win the race.

Netanyahu should rise above the fray and focus on the big picture. There are concrete diplomatic and defense challenges looming ahead, and nobody else running in this election is obvious prime ministerial material. This is the view of most Israelis, according to the polls.

Netanyahu must market himself as a leader who has, and still can, responsibly navigate a path for Israel in the face of the many regional and international threats. This is not just an argument for reelection by default. It’s the basis for a robust and realistic campaign platform.

He should campaign on his successful record in keeping Israel out of the turmoil of neighboring Arab civil wars, while acting decisively to check the advances of Iran, Hezbollah and Hamas. Despite the election period, Israel should and undoubtedly will continue to strike at Iranian military targets and weapons factories in Syria when quality targets present themselves. (In fact, it did so this week).

Of course, this is always delicate. It is never certain that such strikes – which are consensually viewed here as an essential Israeli interest – will be taken with equanimity by the Iranians. Any clash or miscalculation could lead a broader military engagement, at a moment’s notice. And Netanyahu can never be sure how he emerges from a military escalation. Previous Israeli election campaigns that were held in the shadow of military escalations led to the fall of the government (– for example, the Kadima government in 2009).

Nevertheless, Netanyahu has been and can claim the mantle of a true leader in the security field, even if he has been somewhat too soft in the face of Hamas’ ten-month-long campaign of border attacks and kite-bomb terrorism.

This is almost Netanyahu’s only path to a high road in the coming months. It’s the only honest way to sideline the salience of corruption allegations against him. After all, how can Netanyahu run for a fifth term of office with so many criminal indictments hanging over his head? How can he possibly concentrate on the job, and isn’t it time for “cleaner” Israeli politics?

Netanyahu’s answer should be: “Just watch me. Nobody is more experienced in the defense, diplomatic – and economic – fields. Look at the way the world, on my watch, is beating a path to Israel’s door for diplomatic, economic, intelligence and technological partnerships.”

Netanyahu’s answer should not be to take refuge in a persecution complex; to go on the attack against a “leftist conspiracy” involving “old elites” in the police, prosecution and media that supposedly seek to oust him and the nationalist camp from power. This is something that, alas, Netanyahu already is doing.

I know that such thinking still tangibly dominates discourse on the Israeli Right, but it is both a tactical and a substantive mistake. It’s not good for the democratic tenor of this country, and Netanyahu’s base doesn’t need to hear this.

Likud voters already dismiss the reports of cigar and champagne gifts, and behind-the-scenes dealings with media barons, as irrelevant to their view of Netanyahu. For the Israeli Right, Netanyahu is the bulwark against unilateral withdrawal and concession intentions of the Left. And he is not any more “corrupt” than Labor and Kadima leaders of Israel were pre-1977 or last decade. What, they didn’t live well, and seek to control what was published in the media through cozy relationships with publishers and editors?!

A SECOND ANCHOR of Likud’s election campaign should be its strong leadership team, beyond Netanyahu.

This will not come naturally to Netanyahu, since he has forcefully sidelined other Likud leaders throughout his tenure as prime minister, but this too has been a mistake. Especially now, when his star is under attack, Netanyahu needs to highlight the robust Likud bench; a move that will provide confidence to voters.

Indeed, Likud has a range of impressive and experienced MKs with real executive experience and many accomplishments.

This includes Avi Dichter, who is the very active and effective chairman of the Knesset foreign affairs and defense committee, and formerly was GSS director and served as minister of internal security and of homeland security.

Yuli Edelstein has been a wise Knesset speaker and a successful minister of immigration and information. He is also a Zionist hero.

Zeev Elkin is one the wiliest Israeli politicians, with experience in the foreign affairs, defense, immigration, environment and Jerusalem portfolios.

Gilad Erdan has been minister of environment protection, interior, public security, strategic affairs and information. Few ministers are harder-working than him.

Dr. Yuval Steinitz, a true intellectual leader, has been an important member of the inner security cabinet for years. He served as chairman of the Knesset foreign affairs, as minister of finance for four years (– and was far more successful at the Treasury than Yair Lapid or Moshe Kahlon), and headed the ministries of intelligence, strategic affairs, and energy.

Likud can also boast some of the best very young MKs, including the super-active and impressive Sharren Haskel and Amir Ohana. I hope that they will succeed again in Likud party primaries.

This campaign, Likud should also be highlighting several new/old figures who plan to run for top spots on the Likud Knesset list, including the former Jerusalem mayor Nir Barkat (– I assume he will rank high!), outgoing UN ambassador and former MK Danny Danon, Maj. Gen. (res.) Yoav Galant (who seems about to jump from Kulanu to Likud), and former minister of interior and education Gideon Saar, who is coming back after a four-year break from politics.

(Next week: My campaign advice to Benny Gantz and Bogie Yaalon).