Published in The Jerusalem Post and Israel Hayom, October 12, 2018.

General Yadlin’s unilateral disengagement plans are neither new nor logical. Unilateral Israeli withdrawals will not enhance Israeli security nor improve Israel’s international position and moral standing; and it will rip Israeli society apart, for no good reason. And as the Lebanon and Gaza precedents proved, unilateral Israeli withdrawals only guarantee continuation of the conflict and even its escalation, not its de-escalation. 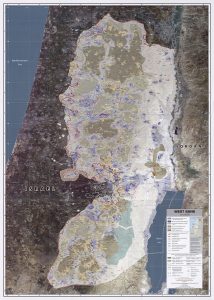 Given the Arab regional meltdown, the inroads made by radical Islam in the Palestinian national movement, and the decrepit dictatorship that has become the Palestinian Authority – it’s hard to believe that anybody still hawks the same-old “solutions” for the Palestinian-Israeli arena.

And yet, that what center-left generals and former government officials did again this week, with the presentation of yet another passé plan for unilateral Israeli withdrawals from the West Bank.

Maj. Gen. (res.) Amos Yadlin – one of Israel’s most important military men – and a group of colleagues at the Tel Aviv-based Institute for National Security Studies (INSS) tabled a comprehensive plan of action to separate Israel from the Palestinians. It’s about Israel unilaterally creating a contiguous Palestinian “entity” under the control of the Palestinian Authority comprising approximately 65 percent of the West Bank and taking steps to starve settlements outside the so-called settlement blocs.

The “new strategic framework” is wrapped-up nice and pretty as original, professional and politically-neutral research that took a year of intensive discussions to produce, and it is couched in high-soaring language about “taking Zionist initiative.”

But essentially it is the same, sad “Plan B” for unilateral withdrawals in the absence of peace with the Palestinians that General Yadlin proposed four years ago, and which he used as a political platform when he stood as Zionist Union candidate for defense minister in 2015.

On the credit side of the ledger, the plan acknowledges a series of realities that are long overdue, beginning with the fact that there is no comprehensive peace deal to be had with the Palestinians any time soon, and it would be a mistake to attempt another frantic John Kerry-style effort to secure such a deal.

There is no obvious solution to the Gaza situation, where Hamas has taken control; nor an easy compromise possible in Jerusalem. Thus, the INSS left these issues completely outside its plan. In these matters, Israel must just stick to its guns, literally and figuratively.

Yadlin also stipulates that Israel will retain near-permanent control of the Jordan Valley for security reasons, and indefinite freedom of IDF action against terrorism throughout the West Bank, in all areas, no matter what nice or nasty entity the Palestinians might develop there. The plan allows for no Palestinian veto in these matters.

But then Yadlin and Co. make a serious of spurious and unsubstantiated arguments.

First, that by ceding security control to the PA of some parts of Area B, and civilian/economic control of 25% of Area C (what the plan calls genteelly calls “reducing the dimensions of Israeli occupation”), Israel’s security situation will improve.

Second, that the granting of such unilateral goodies to the PA will encourage its moderation; and not, rather, teach Palestinian leaders just to ratchet-up their demands and wait-out Israel – as they have adamantly done over the past 25 years.

Third, that by doing so, Israel will gain more international legitimacy and Sunni Arab state cooperation.

Fourth, and most problematic, these experts nonsensically claim that ending construction and government budgets for daily life in “far-flung” settlements – in effect, choking them to death – doesn’t amount to another Gaza-style disengagement. While they don’t propose physically dragging Israelis out of their homes in Shilo or Ofra, they suggest making it impossible and illegitimate to live there.

GENERAL YADLIN calls his plan a diplomatic “Waze’’ – an ingenious route out of the current situation towards an indeterminate but better future. I view it as Waze gone wacky, inevitably leading towards runaway and hostile Palestinian statehood, without securing an end to conflict.

After the Israeli withdrawals outlined in the plan, how is Israel going to be able to prevent the fall of Judea and Samaria to Hamas or one of the other jihadist groups now swarming the Mideast? If we reserve the right to regularly raid the territories to root out Hamas cells (which Yadlin correctly insists on), how is that any different from the situation today? And if we keep a significant troop presence on the hilltops and at key junctures, who will really consider this an end to the Israeli “occupation”?

With Israel’s civilian settlements in the Samarian mountains asphyxiated, can you imagine what will befall Israel’s rump troop presence in the West Bank? Remember how badly Israel’s “security zone” in southern Lebanon worked out? Our forces there had no legitimacy whatsoever, brought us sustained international opprobrium, and we suffered constant casualties. Do we want to turn the West Bank into southern Lebanon?

Nor will unilateral moves provide Israel with diplomatic breathing room, as the plan’s proponents claim. Withdrawing from one part of the territories won’t convince anyone that Israel has a right to keep other parts. On the contrary: A partial Israeli pullout will intensify the illegitimacy of our remaining presence in the territories. Every Israeli retreat is taken as proof that the territories are all stolen property that must be returned to their rightful Palestinian owners. Unilateral withdrawals will bolster Palestinian maximalism, not engender Palestinian cooperation or moderation.

What about the infuriating Palestinian campaign of denialism (– denying Jewish history in Jerusalem and Israel through UNESCO resolutions and more), or PA “pay for slay” stipends to terrorists, or Palestinian lawfare which seeks to criminalize Israel in international legal forums like the ICC?

Under Yadlin’s “Zionist initiative” plan, Israel is supposed to swallow all this while unilaterally forking over parts of Areas B and C to the PA! Why reward the wayward PA in this way?

Worst of all, unilateral withdrawals will unnecessarily and unjustifiably tear the internal fabric of this country asunder. It’s unforgivable and simply indefensible to tie a death-knell tourniquet on Israeli towns in Judea and Samaria – if at all – without hope for real, comprehensive, sustainable peace in the offing.

I prefer the view of Maj. Gen. (res.) Yaakov Amidror, Prime Minister Netanyahu’s former national security advisor, who is now the Anne and Greg Rosshandler Senior Fellow at the Jerusalem Institute for Strategic Studies (JISS). (In fact, JISS was founded to be a conservative intellectual counterweight to the left-leaning INSS).

Amidror rejects suggestions that Israel undertake unilateral initiatives – whether annexation of Judea and Samaria, or withdrawals from all or parts of the territory. Unilateral moves, he says, entail a very high domestic price for Israel, while earning Israel very few gains in diplomatic and defense terms.

“Israel must not jeopardize its existence by embarking on rash initiatives that would radically worsen its security situation – just to please proponents of ‘forward progress’ at any cost. This risk is not worth taking,” Amidror has written.

Amidror accepts that Israeli building in Judea and Samaria should best be focused in the settlement blocs and within the existing boundaries of settlements – as was reportedly agreed last year between Israel and the Trump administration. But that’s a far cry from Yadlin’s plan to suffocate settlements.

“Israel should manage the conflict until conditions improve for a renewed negotiating effort at an agreed-upon solution. When on the edge of the cliff, standing still is preferable to stepping ‘forward,’” Amidror concludes.