To boost the beleaguered businesses and hardy residents of the Golan Heights – hit by bacterial infections and the security situation – here is a guide to good drinking of kosher Israeli wines from the Golan, and beyond. 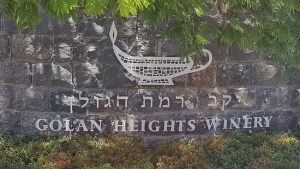 Unfortunately, a bacterial infection (leptospirosis) has forced closure of the Zavitan, Zaki and other streams in the central Golan Heights to hikers and swimmers, hitting tourism to the Golan hard. Fortunately, my family and I hiked and swam the El Al valley in the southern Golan last week, not the streams known to be infected; and I hope that we won’t get sick.

Alas, the number of Israelis touring the Golan this summer was down regardless, apparently because of security tensions over the Syria border. Every business we visited complained of a downturn in the number of vacationers.

So, to boost the beleaguered businesses and hardy residents of the Golan Heights, I devote the first section of my semi-annual kosher Israeli wine guide to the spirits of the Golan.

I enjoyed a private tasting at the Bazelet HaGolan winery in Kidmat Tzvi, near Katzrin (– with thanks to Idan). Yoav Levy, the owner and chief winemaker, and Ilan Zaafran are producing sock-it-to-ya, powerful wines. My favorites were the 2016 unoaked Chardonnay (fresh and fruity, with grapes from Merom Golan), and the flagship 2014 Cabernet Sauvignon Reserve (harvested late in October, round and sweetish, although a bit too high in alcohol, at 15%).

The 2015 “Vineyard 188” Cabernet, made from southern Golan Tel Phares grapes (and named in honor of the IDF’s 188th armored brigade which heroically blocked the Syrian invasion on Yom Kippur 1973), was round and pleasing too.

For new-world wines, one of the best is Matar – the kosher label from Tal Pelter’s winery on Kibbutz Ein Zivan in the northern Golan Heights. Wine Spectator scored Matar’s 2013 Cumulus blend of Cabernet, Merlot, Cabernet Franc and Petit Verdot at 90 points, and the 2015 blend was even better. It was the best wine poured at last summer’s Israel Museum Wine Festival.

At this summer’ festival, standing-out were Matar’s 2016 Stratus (Shiraz) and 2015 CB (Cabernet-Shiraz, with grapes from the Golan, Galilee and Jerusalem hills). I didn’t like the Matar 2017 Rose, nor any of the Rose wines at this year’s Jerusalem wine extravaganza (– all too flavorless).

The Alfasi family’s Odem Mountain facility is Israel’s northern-most winery. Its Yaar Odem blend (Cab-Merlot-Syrah) is a great “cholent wine” (deep, tannic, muscular). The Volcanic Shiraz is from the Yuval vineyard on the northern Naftali mountains (with blackberry and dark chocolate overtones), also to be paired with heavy stews. The crisp Chardonnay is grown at the foot of the Hermon at 1180 meters above sea level, and the juice was aged for five months sur lie (in its own yeast), giving it sweet, caramel-like notes.

The Golan Heights Winery received the 2011 Gran Vinitaly Special Award as the best global producer of wine – well deserved! Since 1983, this winery has led the modern Israeli quality wine revolution. It grows 20 types of grapes in 24 vineyards on the Golan, and ages its wine in 11,000 (mostly French oak) barrels.

This summer, Golan Heights staff were pouring Tempranillo, Sangiovese, Nebbiolo and Pinot Noir in their Gamla series of wines, along with a Portuguese grape variety called Tinta Cao and a Beaujolais-style Gamay Noir.

If you can afford it, look for the upper-level Yarden series single-vineyard Cabernets from the El Rom, Yonatan and Baron vineyards – all on the Golan Heights.

I very much wanted to visit the French-founded Domaine Seror winery in moshav Avnei Eitan on the Golan, but it was high harvest season and the vineyard owner and winemaker Yuval Matzliah didn’t have time to meet me. Wine guru Adam Montefiore says that the Seror Syrah (aged for a year in large 400-liter barrels) is bold and meaty. It won a gold medal at the Terravino competition. 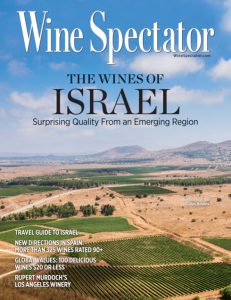 MOVING ON to other areas of Israel, Ya’acov Berg’s Psagot Winery north of Jerusalem was the hands-down winner at a gourmet dinner and wine tasting event held recently in Jerusalem (on behalf of the MEOR Foundation). The Psagot Viognier 2017 was delicious and the Cabernet 2016 smooth and intense. I also recommend Psagot’s “Peak” blend of Rhone Valley varietals (Syrah, Petite Syrah, and Mourvèdre).

Etrog grower Yehuda Gros of Moshav Nehalim is now the owner and winemaker of a garagiste winery which sources its grapes in the outstanding Kadita vineyards near Meron in the upper Galilee. He is partnered with wine personality Oded Shoham. The Gross Family 2014 Black Onyx Cabernet Sauvignon is outstanding (spicy!), and the 2016 vintage is releasing now. Watch for Gross’ Genesis 2012 blend too.

Teperberg Winery’s mid-level Inspire series of wine continues to be a best buy recommendation. The Meritage (Cab-Merlot) blend is good, and the Devotage (Malbec-Marselan) blend is outstanding – one of my favorites. We poured Devotage at my son’s recent wedding, to great acclaim!

Erez and Vered Ben-Saadon’s Tura Winery in Rehelim, near Ariel, is a highlight of any tour in Samaria. It has earned many enthusiastic fans in the kosher wine world. Try Tura’s top-level Bordeaux-blend Mountain Peak, or the just-released 2016 Chardonnay (buttery and mildly oaked), made from grapes grown on Mount Gerizim high above Nablus.

Moti Shor’s eight-generation-old Arza Winery has reinvented itself through a quality label called Hayotzer, under the supervision of French-born winemaker Philippe Lichtenstein. The 2014 “Winemaker’s Choice Virtuoso” Cabernet (in a heavy big bottle) was scored 93 points by Wine Enthusiast magazine. This fall, Hayotzer is releasing five affordable wines under the name “Legato.” The 2016 Cabernet Legato is sourced from the Dishon vineyard in the upper Galilee. It is smooth and approachable, and a good buy.

Finally, I recently was introduced to Har Hatzor winery, a boutique shop in Binyamin, led by winemaker Yehoyada Nizri. His easy-drinking 2011 Amona blend (Merlot-Cab-Shiraz) was grown in 900-meter high vineyards, and hits beautifully with cherry and plum aromas.