Had a 100-kilogram rampart stone fallen into the Mount where Moslems gather or pray – Israel would be excoriated, even though Wakf digging may be to blame. 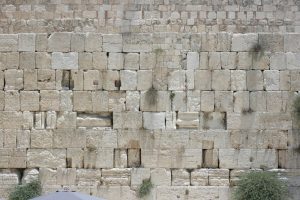 The 100-kilogram stone that burst out of the Western Wall this week and came crashing down on a plaza two meters away from a Jewish woman in prayer has raised questions over stability of the entire Temple Mount edifice.

It’s possible, say scientists and archaeologists, that the stone was weakened from its moorings by water seeping through the soil fill behind the wall or by vegetation growing within the wall itself.

But it is also possible that the Jerusalem Wakf Islamic Religious Trust which runs the Mount caused the near-catastrophe. It continues to conduct illegal digging projects and unsupervised underground renovations on the Temple Mount.

“We need to find out what is happening on the other side” of the wall, said Prof. Eilat Mazar this week. While the use of tractors, trucks and heavy machinery is ostensibly forbidden there, “every time they use an industrial tool – even for drilling – it influences the walls,” she said.

Mazar, of the archaeology institutes at the Hebrew University and Shalem College, has published a monumental survey of every single stone that makes up the Western Wall and Har HaBayit (the Temple Mount), and she currently leads digs in the Ophel south of the Mount.

She feels that the massive Herodian-built Temple Mount superstructure is relatively stable overall, but that there are sections that need closer inspection and preservation. This is especially true of the southeastern corner of the wall, located in the Davidson’s Archaeological Park. Mazar has warned for several years that a big bulge is protruding from the stone wall in this section.

The Israel Antiquities Authority (IAA) plans a scan of the southern and eastern sections of the Temple Mount walls, but it has not been carried out – because everything related to the Temple Mount is diplomatically sensitive. Just getting agreement on who is responsible for inspecting and fixing stones is complicated.

And yet, the matter is urgent. Can you imagine what the Moslem and global reaction would have been if a 100-kilogram rampart stone had fallen into the Temple Mount and onto a plaza where Moslems gather or pray? Israel would be excoriated by the UN Security Council, unjustifiably of course, for “demolishing Moslem shrines” – and no consideration would be given to the fact that out-of-control Wakf excavations may be to blame.

IT IS HARD TO AVOID the impression that the State of Israel has been criminally negligent in supervising digging and controlling building on the Temple Mount – for the past two decades and today too.

The troubles began when in 1999 the Northern Branch of the Islamic Movement and the Wakf violently and illegally plowed with heavy machinery into the ground below Al-Aqsa to turn “Solomon’s Stables” into a vast underground prayer area, now known as the El-Marwani Mosque.

Without any scientific supervision whatsoever, they bulldozed 9,000 tons of the most valuable dirt on the globe and unceremoniously dumped close to 400 truckloads of it as “garbage” in the Kidron Valley.

It’s clear the Islamists were seeking not only to expand their prayer space but to purposefully destroy any traces of Jewish history on and under the Mount. Furthermore, the Wakf has proclaimed its intent to turn the whole Temple Mount plaza – a vast compound – into a prayer zone, thereby precluding any possibility in the future of allocating even a small corner of the Mount for Jewish prayer.

In the summer of 2004, the High Court of Justice stepped-in (too little, too late) to protect residual Temple Mount antiquities. The justices accepted a petition filed by the Committee for the Prevention of Destruction of Antiquities on the Temple Mount (which included personalities such as the late Justice Meir Shamgar, writer A.B. Yehoshua, and former Jerusalem Mayor Teddy Kollek), forcing the government to prevent removal from the Mount by the Wakf of another 3,000 tons of archaeological rubble.

“The mounds of dirt must not be taken outside the walls of the Temple Mount [compound] before they have been sifted under the supervision of a professional archaeologist, in situ,” the court ruled.

Unfortunately, the Wakf has never allowed that rubble to be professionally sifted by archaeologists. And last month, under the cover of Ramadan (when all non-Muslims are banned from the Temple Mount and the Israel Police take a step back), hundreds of Moslems actively began picking through the supposedly-protected rubble, and they removed stones to build terraces.

Some of these stone slabs are believed to be over 1,000 years old, and some bear ancient inscriptions. Only the alertness of archaeologist Zachi Dvira, founder and leader of the Temple Mount Sifting Project (and who lightly surveyed the residual rubble in 2013), caught the Wakf red-handed. Acting on Dvira’s warning, the IAA and police stepped-in to halt the Wakf’s unapproved earthworks, but it is clear they have their hands tied by the government in attempting to enforce the Antiquities Law on the Temple Mount.

FOR 13 YEARS (from 2004 to 2017), Dvira and fellow archaeologist Israel Prize laureate Prof. Gabriel Barkay, with nearly 200,000 volunteer workers, have wet-sifted the soil that the Wakf gouged-out of the Mount – at a facility they established in nearby Emek Tzurim.

Their painstaking work has brought to light one million finds from the First and Second Temple eras, as well as late Roman, Byzantine, Crusader and Islamic periods, and Middle Ages.

Among the amazing finds are a seal from a Biblically-known First Temple priestly family; a Second Temple silver half-shekel coin that depicts a chalice from the Temple and three pomegranates surrounded by the words “Jerusalem the Holy”; and a coin with the phrase “For the Freedom of Zion” from the First Revolt against the Romans that preceded the destruction of the Second Temple.

Unfortunately, the Temple Mount Sifting Project – one of the most important archaeological projects in the Land of Israel of our times –– is out of money. The project needs NIS 8 million over the next four years to resume sifting of Temple Mount soil, and to continue researching and publishing its findings.

It is time for the Netanyahu government to back the project generously. It’s the least the government can do as penance for its malfeasance in the face of ramped-up Palestinian “Temple denial” and archaeological destruction.

At the same time, Israel should act with determination to counter Palestinian-Islamic aggression against Jewish history in Jerusalem, and, of course, act with alacrity to ensure the stability of Temple Mount walls.