Published in The Jerusalem Post and Israel Hayom, July 6, 2018. 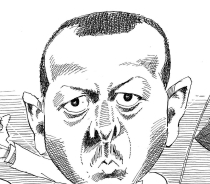 Over one year ago, the advisors on eastern Jerusalem for the Jerusalem Municipality, Dr. David Koren and Ben Avrahami, sounded the alarm about a Turkish invasion of Jerusalem.

First in the Hebrew intellectual journal Hashiloach (Vol. 4) and then on the website of the Jerusalem Institute for Strategic Studies (JISS), Dr. Koren described the nefarious intensifying involvement of Recep Tayyip Erdogan’s Turkey and other radical Islamist actors in Jerusalem political and social affairs. This includes troublemaking on the Temple Mount and other subversive activities.

I highlighted the developing danger from Turkey in this column immediately afterwards (June 2017).

This past month, Nadav Shragai and Yori Yaalon of Israel Hayom newspaper published an important series of exposes on additional Turkish muckraking in Jerusalem. The question is: Are Israeli authorities ready to act precipitously and aggressively to quash the Turkish infiltration?

According to Koren there has been significant erosion in the status of veteran mukhtars (Arab neighborhood leaders) and secular Palestinian leaders in eastern Jerusalem. Into the vacuum have stepped elements identified with Hamas, the northern faction of the Islamic Movement in Israel, the Muslim Brotherhood in its wider context, and especially Turkey.

They are investing tens of millions of dollars per year in Islamic missionary (dawa) activities, renovation of Moslem institutions, holiday handouts, and social networking which glorifies terrorists and explicitly calls for violent resistance to Israel.

The Turkish consulate in Jerusalem and two Turkish quasi-governmental agencies (Mirasimiz and TIKA) are directly implicated in this activity; by their own admission, to the tune of over $40 million. Erdogan’s former chief of staff personally oversees much of this activity, which includes trips for youth to radical Islamic conferences in Turkey, and the bussing to Jerusalem of posses of men and women (known as the Murabitun and Murabitat) who heatedly harass Jewish visitors to Har HaBayit.

As a result, Turkish flags today fly everywhere in eastern Jerusalem and prominently on the Temple Mount too. Photos of the fiercely anti-Israel and openly anti-Semitic Erdogan adorn shops throughout the Old City.

The Turkish purpose is not at all innocuous. It is, rather, to weaken Israel’s hold in the holy city, and to bolster Erdogan’s claim to leadership of the Moslem world on a path to a global Islamic sultanate.

While it is important not to exaggerate the Turkish threat, Erdogan’s interference in Jerusalem clearly needs to be checked. His incendiary activities in Israel’s capital touch the deepest chords of Israeli sovereignty in the eastern part of the city.

At a minimum, the flow of Turkish money into Jerusalem must be blocked. The National Security Council and other security agencies are reportedly looking into this. I hope they are doing so with sufficient alacrity.

MEANWHILE, Erdogan continues to lead anti-Israel campaigns at every opportunity, including the global assault on Israel regarding recent Gaza border riots (– following which Erdogan expelled the Israeli ambassador and consul general).

His favorite accusation is Israeli “genocide” against the Palestinians, and his favorite Palestinians are Hamas leaders. At a recent summit he summoned in Istanbul of the Organization for Islamic Cooperation, Erdogan libeled Israel with torture of Palestinian children “like the concentration camps during World War II, with methods that would put Nazis to shame.”

All the while, Turkey continues to considerably weaken the Western strategic alliance by problematic collaboration with Syria, Iran, China and Russia – despite Turkey’s NATO membership. (Unfortunately, there is no mechanism for turfing Turkey out of the alliance).

Erdogan has sided throughout with Iran on the nuclear issue, declaring Turkish support for Tehran’s “peaceful nuclear program” and voting repeatedly against American-initiated sanctions against Iran. Turkish banks openly cooperate with Iranian banks to circumvent Western sanctions. In 2012, Turkey blew the cover of an Israeli spy network in Iran. More recently the unhinged Erdogan threatened Israel with war over gas fields in the Mediterranean.

At home, Erdogan has jailed more journalists, judges, generals and academics than any other country in the world, including China. He is building 40,000 new jail cells to handle the overload. He is creating an authoritarian system to suit his imperial ambitions, especially after the suspiciously overwhelming AKP victory in last month’s Turkish presidential and parliamentary election.

Israel should go on the diplomatic offensive against Erdogan by pressuring Washington to halt the provision of F-35 jet fighters to Turkey. As Prof. Efraim Inbar of JISS has written, with Turkey pursuing policies that are inimical to the American interest it makes no sense to strengthen Turkish military capabilities.

Erdogan could use his upgraded air force to establish himself as arbiter of developments in the eastern Mediterranean, or to interfere with Israel’s regional air supremacy. There is also the real danger of sensitive technical information about this front-line American weapons system leaking from Ankara to Teheran, Moscow and Beijing.