A tribute to Charles Krauthammer

Published in The Jerusalem Post and Israel Hayom, Friday June 22, 2018

A final conversation that I was privileged to have with the greatest columnist of this generation, who passed away last night – about Zionist belief and the eternity of Israel. 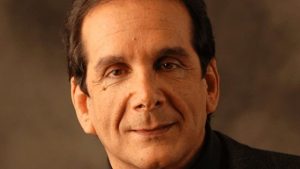 Dr. Charles Krauthammer, perhaps the most luminous and incisive columnist of this generation, announced two weeks ago that he is stricken with terminal cancer and has only weeks to live. (He died last night). I feel an obligation to pay homage to this incredible man, and to add a Jewish, Zionist and personal angle to the many tributes to him that have rightly poured forth.

For 38 years, Krauthammer’s columns, essays, and lectures have stood as pillars of conservative principle and moral clarity. On foreign policy matters, he was unquestionably the most radiant intellectual hawk in America, and on Middle East affairs he was the most consistent defender of Israel and the US-Israel special relationship.

Two examples of his razor-sharp writing regarding Israel and American Mideast policy will suffice, among hundreds of exhibits.

Krauthammer wrote in 2014 about “Kafkaesque ethical inversions” that make for Western criticism of Israel. “The world’s treatment of Israel is Orwellian, fueled by a mix of classic anti-Semitism, near-total historical ignorance and reflexive sympathy for the ostensible Third World underdog,” he wrote.

In 2015, he repeatedly skewered President Obama’s nuclear deal with Iran, calling it “the worst agreement in U.S. diplomatic history.” To Obama, he wrote accusingly: “You set out to prevent proliferation and you trigger it. You set out to prevent an Iranian nuclear capability and you legitimize it. You set out to constrain the world’s greatest exporter of terror threatening every one of our allies in the Middle East and you’re on the verge of making it the region’s economic and military hegemon.”

Krauthammer’s profound understanding of Jewish history, his admiration for Israel, and his very deep concern for its future were on fullest display in a magisterial essay he published in The Weekly Standard in 1998 entitled “At Last, Zion.” The essay conducted a sweeping analysis of Jewish peoplehood, from Temple times and over 2,000 years of Diaspora history to the modern return to Zion.

Krauthammer understood that American Jewry was dying. “Nothing will revive the Jewish communities of Eastern Europe and the Islamic world. And nothing will stop the rapid decline by assimilation of Western Jewry.” The dynamics of assimilation were inexorable in America and elsewhere, he wrote.

Israel, Krauthammer understood, was different. “Exceptional,” he called it – because Israel was about “reattachment of Russian and Romanian, Uzbeki and Iraqi, Algerian and Argentinean Jews to a distinctively Hebraic culture,” and this gave it civilizational and societal staying power for the long term.

Israel “is now the principal drama of Jewish history,” he wrote. “What began as an experiment has become the very heart of the Jewish people – its cultural, spiritual, and psychological center, soon to become its demographic center as well. Israel is the hinge. Upon it rest the hopes – the only hope – for Jewish continuity and survival.”

However, because the “cosmology of the Jewish people has been transformed into a single-star system with a dwindling Diaspora orbiting around,” Krauthammer was apprehensive. It frightened him that “Jews have put all their eggs in one basket, a small basket hard by the waters of the Mediterranean. And on its fate hinges everything Jewish.”

Israel’s centrality, he feared, was a “bold and dangerous new strategy for Jewish survival” because of the many security threats posed to the country, chiefly among them the specter of Iranian nuclear weapons.

Indeed, Krauthammer’s essay “thinks the unthinkable” and “contemplates Israel’s disappearance.” And while Jewish political independence has been extinguished twice before and bounced back following centuries of dispersion, Krauthammer doubted that the Jewish People could pull the trick again. “Twice Jews defied the norm (and survived Diaspora). But never, I fear, again.”

I challenged Krauthammer about his pessimistic perspective on the survival of Israel and the Jewish People at a Tikvah Fund seminar in 2016, where he engaged the Fund’s erudite chairman, Roger Hertog, in the deepest of conversations on strategy and identity.

In this lengthy conversation (which you can watch and read online; search Charles Krauthammer At Last Zion Tikvah), Krauthammer admitted to “trembling doubt” about God alongside belief in some transcendence in the universe, and then he repeated his sobering solicitudes about Israel’s precariousness. He spoke of the impossibility of a fourth Jewish commonwealth – were Israel, transcendence forbid, to be crushed.

I gently reproached Krauthammer on theological terms, by saying that “those of us who moved to Israel out of a grand meta-historic sense of drama believe that our third Jewish commonwealth won’t fail. Whatever it takes, we’ll make it work.”

I sensed that Krauthammer was glad for my emotive intervention, since he immediately and poignantly responded (in Hebrew): “Netzach Yisrael lo yishaker.” (The eternity of Israel will not lie, or fail).

Krauthammer: “That’s what my father used to say when he talked about Israel. I too feel as an obligation to make sure of that throughout my life. I have done what I could, because that prospect (Israel’s disappearance) would make everything I’ve done lose its value. There’s nothing more important than that.”

And then referencing my aliyah, Krauthammer said, “I honor your choice… I commend you for that.” (He went on to describe how he too considered moving to Israel after college, at the urging of his then-philosophy professor David Hartman).

And then Krauthammer asked me: “I wonder what it’s like, and maybe you could tell me, to be an Israeli putting your kids on a school bus, raising them while knowing that one day Iran could have the bomb? Once the nuclear bomb is in the hands of genocidists – then what does that feel like? Do you think there might be emigration as a result? Do you have a feeling about that?”

I answered: “My personal sense is that Israeli society is becoming more traditional, more deeply rooted, more ideological than before. I’m talking even about secular Israeli society. So we’re digging-in for the long term, and not being frightened away despite the shadow that you’re talking about.”

And Krauthammer responded to me, again in Hebrew: “As you people say, “kol ha-kavod.” (Bravo).

So now it’s time for me to return the compliment, and say to Dr. Charles Krauthammer in his dying days: kol ha-kavod to you! On behalf of so many Jews, Americans and Israelis alike, thank you for your resilience, brilliance and steadfast support. We miss you already.