President Trump is acting to restore America’s credibility as a world power after eight years of diffident presidential leadership. He is not frightened by the mobs of the Arab or Persian world or by their effete champions in the West. He doesn’t quake in his boots at the possibility of upsetting Mahmoud Abbas or Ali Khamenei…. Now he needs to follow-up with a plan to target the regime of the ayatollahs and rollback Iranian aggression in the region. He must maximize sanctions to force a real end to Iran’s drive towards a nuclear bomb. And he should give Israel everything it needs to counter Iran’s offensive in Syria. 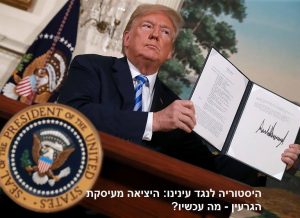 There is a broader context to US President Trump’s recent decisions to nix the nuclear deal with Iran and to move the US embassy to Jerusalem; as well as his decisions to cut funding to UNRWA, to back the Taylor Force Act, to back Israel’s confrontation of Iran in Syria, and to threaten “fire and fury” on North Korea.

The context is restoring America’s credibility as a world power after eight years of diffident presidential leadership.

Barack Obama’s profound aversion to time-tested hard power tools of American statecraft, including the actual use of military power, enfeebled his nuclear diplomacy and led to the worst-ever arms-control agreement, with Iran.

Obama was profoundly uncomfortable with American hegemony. He spoke repeatedly of being ashamed of America’s “over-bearing” leadership record. Even in his final UN speech, he was apologizing for American mega-wealth, “soulless capitalism,” “unaccountable mercantilist policies,” insufficient foreign assistance, and “strongman” pushing of its liberal democratic preferences.

This left Obama with few tools of diplomacy other than exhortations for brotherhood in his image; declarations which flowed so naturally from his deeply narcissistic soul. In fact, words like “enemy, “threat” and “adversary” were not part of his lexicon, nor were concepts like “victory” for the West or “beating” the bad guys. He wouldn’t even name foes, like “radical Islam” or “Islamist terror.”

The only thing he was proficient at was downsizing America, and providing cash transfers to the Islamic Republic of Iran – as much as $150 billion in the last two years of his term. Just how much good Iranian behavior did all that Obama noblesse and largesse buy? None!

Trump has put a full stop to these monkeyshines and to the self-abasement of America. Now he needs to follow-up with a plan to target the regime of the ayatollahs and rollback Iranian aggression in the region. He must maximize sanctions to force a real end to Iran’s drive towards a nuclear bomb. And he should give Israel everything it needs to counter Iran’s offensive in Syria.

MOST NOTABLY, Trump blew-off all those sometime-allies and anxious advisors who forecast catastrophe if America angered the Iranians. Trump would be endangering America and Israel if the JCPOA was set aside, they frantically warned.

These admonitions were similar to those issued against Trump when he was considering cuts to Palestinian pork barrels and contemplating the US embassy move to Jerusalem. Ominous things would happen, he was told. The proverbial “Arab street” would erupt in anger, endangering American diplomats and interests across the Middle East – oh my!

But lo and behold, and to his great credit, Trump was not frightened by the mobs of the Arab or Persian world or by their effete champions in the West. He didn’t quake in his boots at the possibility of upsetting Mahmoud Abbas or Ali Khamenei.

He hasn’t solicitously felt the need to address them as “His Excellency President Abbas” or “Supreme Leader Khamenei” (as did Obama), nor to cater to their revolutionary agendas. Instead, he has called the Palestinian Authority “disrespectful” and Iran a “regime of great terror.” He says that “America will not be held hostage to nuclear blackmail” or to Palestinian obstructionism, and he intends to make both Iran and the PA bend.

This change of discourse is extraordinarily important. It sets new standards for the way in which diplomacy is to be conducted.

It sets aside hackneyed formulations like “there is no military solution to the standoff with Iran,” or “the only choice is this deal (the JCPOA) or war,” and “without an American-European consensus, Iran can’t be faced down.”

Having pulled the self-imposed wool off American eyes, Trump is in a position to hold Iran accountable. With the JCPOA dead, the Iranians no longer have the legitimacy to conduct enrichment research with advanced centrifuges (with Western help) while dummy inspections take place. They are not going to be able to arm Hizballah or build IRGC bases in Syria without Administration attention. America no longer has to fear confronting Iran on these matters lest the ayatollahs withdraw from the nuclear accord.

Similarly, in relation to the Palestinian war on Israel, Trump has laid away obsolete paradigms such as “the two-state solution is the only solution,” or “Israel can’t survive without a full-fledged Palestinian state,” and “everybody know what the contours of a Mideast peace settlement look like and they run along the pre-67 lines.”

Trump has moved beyond these synthetic gospels.

Having pulled the self-imposed wool off American eyes, Trump is in a position to hold the Palestinians accountable, as he has started doing. No more “pay for slay” – payments with American taxpayer money to the families of Palestinian terrorists. No more forbearance for Palestinian criminal law attacks on Israel or gross denials of Jewish history at international institutions. No more slavish devotion to maximal Palestinian diplomatic demands. The Palestinians no longer have a veto over American policies.

So in grand perspective, a very significant strategic shift is underway in Washington, and it offers hope for honest confrontation with regional realities. There may be a rough ride ahead, for the US as well as Israel, but at least the two countries are on the same page with a sober understanding of the challenges.