Published in The Jerusalem Post and Israel Hayom, April 20, 2018.

Despite military threats and other challenges, the State of Israel is winning on all fronts. Israel is stronger and healthier than all its enemies combined, and life in Israel is marked by all that is satisfying and exciting – sacrifice, commitment, achievement and joy.

On Israel’s 70th Independence Day, it is important to emphasize and re-emphasize this perspective; to shake off the bleak and sinister prognostications sometimes advanced by both ‘friends’ and enemies. The Heavens are shining, not collapsing, upon Israel. 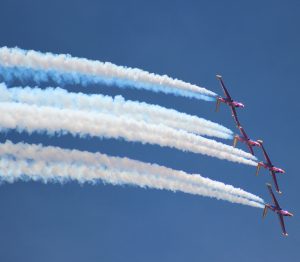 A strict strategic assessment leads to the conclusion that Israel at 70 has the upper hand. Despite military threats and other challenges, the State of Israel is winning on all fronts.

Statehood: Across Arab expanses, countries are crumbling, borders are being erased, and societies are being torn apart. In contrast, the nation state of Israel is resolute, its borders unyielding, its society robust.

Security: In the face of Iranian ambitions, Russian adventurism, and American retrenchment, Israel stands tenaciously firm with the strongest military ever assembled in the Middle East, and with steady, experienced hands at the helm of state. Vigilance, patience and diplomatic nimbleness are seeing Israel well through the regional storms.

Territory: Israel knows how to defend its borders, and hasn’t made any serious withdrawal mistakes recently. Can you imagine the mayhem and suffering Israelis would be experiencing had we withdrawn from the Golan or Samarian heights? Palestinian leaders can bellow away with venom at the UN, but everybody knows that Palestinians and Israelis (and Jordanians and others) are better off with the current situation where Israel firmly controls the West Bank envelope.

Diplomacy: North American public opinion remains staunchly pro-Israel – which means that Washington and Ottawa can be expected to stand by Israel’s side when it faces moments of challenge. Moreover, Israel’s diplomatic horizons are expanding to include important allies beyond North America and Europe. Trade and security delegations from China, India, Russia, Africa and South America are beating a path to Jerusalem seeking opportunities to cooperate with Israel, not to isolate her. And behind the scenes, Israel’s relations with Egypt, Saudi Arabia and other Sunni states have never been better.

Strategy: Key global players have come to accept Israel’s strategic platform; i.e., that the main conflict in the region is no longer Israel versus the Palestinians or Israel versus the Arabs. Instead, the main axis of defense and diplomatic activity in the Middle East is an unofficial alliance between Israel and most of the Arabs (together with Western powers), against the Iranians and the jihadis. The forces of stability and moderation (with Israel in a lead role) are arrayed against the forces of violent and radical Islamic revolution.

There is an Israeli “grand strategy” of sorts, and it has been largely successful. It involves steadfastness, patience, and looking over the horizon. It involves being both flexible and firm. It involves positioning Israel as a regional anchor of sanity and a global source of ingenuity.

Economy: BDS efforts notwithstanding, Israeli science and technology is in high demand everywhere. Israel’s foreign currency reserves are deep ($115 billion), and its exports are high ($102 billion). The debt is manageable, unemployment is low, the banks are solvent, and the public is educated and productive (– although the large Haredi and Arab publics lag significantly behind). The country now has natural gas and desalinated water riches, which should make Israel self-sufficient as well as a strategic player in the regional resources market.

Aliyah: Israel continues to attract immigration: About 30,000 olim a year. Most of these immigrants could go elsewhere, but they are choosing Israel! And perhaps the Heavens will surprise us with yet another wave of one million immigrants in the coming decades.

(Contrast this with the sad situation elsewhere in the region: Three million refugees are on the roads and high seas, fleeing Africa and Arabia, and another thirty million could yet follow. Good luck to Europe).

Identity: One of the greatest sources of energy in Israel is intensification of faith as an anchor in the country’s societal makeup, alongside a relatively high birthrate. Israel is increasingly a nation of believers, with great collective spiritual searching underway. In my view, this too ultimately is a source of health and strength.

SO IN OVERALL PERSPECTIVE, Israel is stronger than any of its enemies; indeed, stronger than all its enemies combined. Neither the perpetual Palestinian conundrum, nor the Iranian threat to Israel, nor the unstable regional situation – dim my optimism. My assessment is that Israel is winning on all battlefronts, even though there are inevitable conflicts ahead.

Perhaps most important of all, Israelis are neither crushed nor dispirited by their challenges. They remain quite resilient and motivated to build an even better future. And this gives Israel fortitude for the long haul ahead.

One of Israel’s most-respected strategists, Prof. Efraim Inbar, president of the Jerusalem Institute for Strategic Studies, has reached similar conclusions. In a 4,000-word essay published this week, he determines that “time is on Israel’s side.”

“A review of the balance of power between Israel and its foes; of the domestic features molding Israel’s national power; and of Israel’s standing in the international community – validates the assessment that Israel has the dominant hand for the foreseeable future.”

On Israel’s 70th Independence Day, it is important to emphasize and re-emphasize this perspective; to shake off the bleak and sinister prognostications sometimes advanced by both ‘friends’ and enemies. The gloomy, wintry forecasts are just not accurate.

I’m referring specifically to Obama-era American officials, and to Jews on the hard Left, who have warned Israel that unless it rapidly proceeds to establish a full-fledged Palestinian state in Judea and Samaria, the sky will come crashing down on the Jewish state; that unless the “two-state solution” is promptly implemented, Israel will moulder, or atrophy into apartheid and inch into isolation.

Well, they’re wrong. The wisdom and utility of a two-state settlement aside, its doubtfulness does not doom Israel. Long-term lingering conflict with Palestinians is lamentable but bearable, and Israel will continue to prosper and be worthy nonetheless. And Israel’s hand remains outstretched for peace, whenever our adversaries are truly ready for a levelheaded settlement.

So despite the overwrought friends, apocalyptic agonizers, boycotters and detractors – the Heavens are shining, not collapsing, upon Israel.

LISTEN TO THE WORDS of the late, great Rabbi Dr. Ambassador Yaacov Herzog, speaking in 1971 about “The Permanence of Israel”:

“We face perils. No man can guarantee that fighting will not resume tomorrow, that our soldiers will not have to fight again bloody battles. But we know we have the strength to withstand them… With firmness touched with generosity, with strength uplifted by spiritual understanding, we can move ahead. With all the difficulties, with all the pressures, we are the generation of redemption. Let us indeed be worthy of this privilege that defies human logic and supersedes human vistas.”

So on this Yom Haatzmaut, count your personal and our national blessings. Life in Israel is full of meaning and delight – adorned by sacrifice, commitment, achievement and joy; the crucial ingredients that make life satisfying and exciting, and uniquely so for Jews who have long awaited a national return to Zion.