Published in The Jerusalem Post and Israel Hayom, April 13, 2018.

Nobody in the world has the right to criticize Israel’s defensive actions on the Gaza border, even if Israel had used significant force against the Hamas mobs – which it didn’t. Having been so wrong in their Pollyannaish hopes for the Oslo Accords, for the Arab Spring, and for the JCPOA – and so feckless during the Holocaust – the nations of the world have no moral right to tell Israel what to do, how to conduct its politics, where to erect its security fences, how to conduct its military campaigns, where draw its borders or how to defend them, or what ancestral lands to trade away, if at all, to the Palestinians. 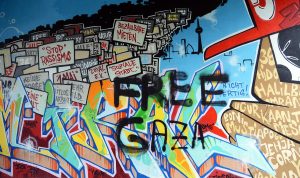 Just who exactly has the right to tell Israel how to defend its borders?

Might it be the French government, which this week condemned the IDF for employing what it called “indiscriminate fire” against Hamas terrorists who are seeking to breach the Gaza border?

This is the same French that have never known how to defend their own borders, against Nazi invasion nor against Islamist infiltration; the same French, two of whose local embassy personnel were last month arrested for smuggling dozens of weapons from the Hamas-run Gaza Strip to the West Bank.

Might it be the European Union, which this week snorted that the deaths of Palestinian protesters along the Gaza border “raise serious questions about proportionate use of force” by Israel?

Proportionate?! This is the same EU that continues to intervene massively and disproportionately on behalf of the Palestinians in their struggle with Israel – through gargantuan sums of aid money that partially goes to pay terrorists and fund hostile NGOs, by building illegal settlements in Area C for Palestinian squatters, and by supporting anti-Israel resolution after resolution in international forums including coda that denies Jewish history in Jerusalem.

The EU is lecturing Israel about proportionality? Do EU governments demand proportionate response from their police SWAT forces when they hunt down homegrown terrorists and airport bombers in Paris, Brussels and Marseille?

And besides, the demand for “proportionality” in military conflict seems to be a nonsensical special law cynically applied only to Israel – as if Israel was in a sportsmanlike joust with Hamas or Hezbollah.

This is also the same EU that supported the maliciously-biased UN investigations of the IDF (Goldstone and more) after Israel was forced to war against Hamas three times over the past decade because of Hamas rocket and terrorist attacks.

Or perhaps it is the dictatorial and anti-Semitic Turkish leader Recep Tayyip Erdogan who has a “right” to criticize Israel? Erdogan this week once again accused Israel of war crimes.

This is the same Erdogan who has jailed tens of thousands of Turkish academics, judges, journalists, human rights activists and officers who have dared to criticize his regime; the same Erdogan who openly harbors a hard-core Hamas operational terrorist headquarters in his capital city.

Or perhaps Israel should accept criticism from Russia, which said three days ago that Israel’s use of force against Hamas gangs was “unacceptable”?

This is the same Russian government that has bombed away indiscriminately in Syria, killing thousands, and which is providing military and diplomatic cover to Syria’s butcher-in-chief Hafez Assad as he barrel-bombs his own people with poison gasses.

What about the United Nations Security Council, which if not for two Trump administration vetoes, would have excoriated Israel for blocking Hamas infiltration and attack antics? Should Israel pay any attention to UNSC disapproval?

This is the same UNSC that can’t find a way to do anything about the seven-year-long slaughter in Syria, or about Iran’s subversive muckraking all across the Middle East.

Or how about global media giants and pundits, who blathered on this week about poor and peaceful Gazan protestors comprised of women and children who were being “brutally targeted by IDF sharpshooters” – which is an absolute and despicable lie that any responsible journalist should have eschewed?

Of course, these are the same journalists who haven’t been much moved to outrage about Syrian or Iranian atrocities at any time over the past decade, and who celebrated Obama’s disastrous deal with Iran as a great achievement. They get truly self-righteous and especially angry only when Israel is involved in a military altercation.

THE TEMERITY AND HYPOCRISY of such critics is simply astounding. I say that none of them have the right to criticize Israel’s defensive actions on the Gaza border, even if Israel had used significant force against the Hamas mobs – which it didn’t.

Israel need not apologize for defending itself vigorously against Hamas’ tunnels, rockets, missiles and marches; nor for killing of Hamas terrorists planning and leading the border riots; or for the unavoidable deaths of Palestinians civilians behind whom Hamas fighters are purposefully hiding.

Israel also must never apologize for reminding the world again and again that Jews are not foreigners in their ancestral homeland. Israel is not an occupying force in the plains of the Sharon, or the sand dunes of the Negev adjoining Gaza, or the hilltops of Judea and Samaria, or in Jerusalem. And it has a right to defend its borders without being subjected to wicked censure.

GIVEN THE PROXIMITY of these events to Yom Hashoah (Holocaust Remembrance Day), historical precedents inevitably come to mind – something that only reinforces Israel’s right to defy international deprecation.

The global diplomatic community stood by as Hitler grew in power and began persecuting the Jews of Germany. They did mostly nothing during the war even as the contours of the Nazi extermination regime against Jews became apparent. They failed to bomb the railways to Auschwitz, and more. Diplomatically, the world failed the Jewish People.

Today, the United Nations itself has become one of the greatest purveyors of anti-Jewish and anti-Israel delegitimization. The so-called “Security Council” is more seized with Israeli housing starts than genocidal threats against Israel.

Global powers also have failed to halt Iranian hegemonic advancement across the region, including Iran’s recent entrenchment in Syria as a base of operations against Israel. All this, in full view of a well-wired world.

In this dismal situation, the Jewish People and the State of Israel diplomatically owe the world nothing. Broadly speaking, the nations of the world have no moral right to tell Israel what to do, how to conduct its politics, where to erect its security fences, how to conduct its military campaigns, where draw its borders or how to defend them, or what ancestral lands to trade away, if at all, to the Palestinians.

Quartet diplomats, Russian diplomats, Norwegian diplomats, French and German diplomats and more ought to approach us with a great deal of humility when they come to discuss our diplomatic well-being and before they attempt to dictate terms of our future or critique our military operations.

Having been so wrong in their Pollyannaish hopes for the Oslo Accords, for the Arab Spring, and for the JCPOA, they ought to give Israel the benefit of the doubt when Jerusalem feels the need to act cautiously in the diplomatic arena or determinedly in the defense arena.

As former Prime Minister Menachem Begin once challenged and chastised the German Chancellor, “Are we a vassal state? And would you prefer a weak Israel?”