Published in The Jerusalem Post and Israel Hayom, January 12, 2018.

In the days following the terrorist attack in Samaria that slew Rabbi Raziel Shevach, and the launch by the Palestinian Authority of yet another round of legal action against Israel in international forums, one doesn’t get the sense that Israel’s political leaders, on either side of the aisle, are truly burning with ire, and moving decisively to counter these assaults… It is no longer acceptable just to sit back and sigh that “Israel’s hands are tied” in response to terrorism and lawfare. Israel should build massively in strategic consensus settlement zones. 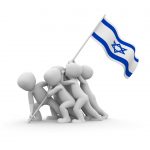 Anger, writes Maimonides, is a treacherous emotion to be avoided in most situations, as is hate (Codes, The Book of Knowledge, 2:3). Except when faced with evil. Then, anger is an appropriate, necessary and energizing emotion. And it is a mitzvah to hate those who seek to undermine the morality of society or to destroy the nation.

In matters of defense and foreign affairs, anger can be an especially dangerous basis for policy. One hopes and expects that cooler heads will dominate government decision-making in these fields, even when facing brazen assaults on our national dignity and security.

And yet, there comes a point when one hankers for a bit more peeve in Israel’s positioning; a touch more irritation in Israel’s response to attacks on it; a little less acceptance of the inevitability of hypocrisy in the way Israel is treated by putative allies and the usual enemies alike.

Anger has served US President Trump well in shucking-off some of the existing orthodoxies in Washington. His resentment of liberal elites and their conventions has driven him to upset the apple cart in ways heretofore unthinkable; and guess what, not always detrimental.

This includes Trump’s rejection of the Holy Grail status of accords like the Paris climate agreement, the Trans-Pacific Partnership, and Obama’s nuclear deal with Iran. It includes his unwillingness to ignore North Korea’s nuclear provocations. It includes Trump’s bucking of the global diplomatic consensus not to recognize Jerusalem as Israel’s capital.

It includes his refreshing stance regarding the violability of US funding for the malevolent UN, for the funding of Palestinian forever-refugee support schemes like UNWRA, and for Palestinian pay-for-slay programs.

So, to a certain degree, annoyance at accepted wisdom can be a valuable spur to creative policy. Pique and impatience can be harnessed, hopefully smartly, for nifty change.

Were it to be so here in Israel too.

It is high time that the public angrily demand that both government and opposition parties put aside their internal rivalries and overcome paralyzing hyper-attentiveness to foreign criticism, and do what is necessary in order to break out of Israel’s long-standing diplomatic straitjacket.

Partially, this means being truly open to new diplomatic initiatives coming from Washington, which I think will yet come forward (– despite the current Palestinian refusal to engage in any talks that don’t promise them everything they want in advance).

But is also means that it is no longer acceptable just to sit back and sigh that “Israel’s hands are tied” in response to terrorism and lawfare.

This is particularly true in the days following the terrorist attack in Samaria that slew Rabbi Raziel Shevach, and the launch by the Palestinian Authority of yet another round of legal action against Israel in international forums. One doesn’t get the sense that Israel’s political leaders, on either side of the aisle, are truly burning with ire, and moving decisively to counter these assaults.

Doing what is needed to improve the personal security of Israelis and advance the country’s national goals should not require any apologies. Israel should act.

Primarily, this means shutting down the radical Islamic and nefarious Turkish networks operating in Jerusalem; rolling-back illegal (and EU-funded) Palestinian settlement in Area C; halting the pollution of Israeli water sources by Palestinian sewage; and acting to shore up Israel’s strategic hold on key zones in the “disputed territories.”

It means building massive amounts of new housing for the continuing Zionist settlement project in areas that are in Israeli consensus and not up for future negotiation with the Palestinians – like Jerusalem and the Jordan Valley and the strategic mountain ridges of Judea and Samaria. It means real building – not just announcements of intention to build – in E-1, Maale Adumim and Givat Hamatos, and in Oranit, Petzael, Ariel and Netiv Ha’avot.

Unfortunately, the government has actualized very few of its announced building plans. The de facto settlement freeze – mainly in “settlement block” areas where the government has solid control over tenders and permits! – is so drastic that even the UN Special Coordinator for the Middle East Peace Process and the Peace Now movement have each acknowledged that this government barks a lot about settlements but bites and builds very little.

It’s almost as if Israel has been lulled into a stupor by the intractable nature of the conflict with the Palestinians. No matter how many times Palestinians violate their treaty obligations and Mahmoud Abbas incites to violence by spreading lies about Israeli threats to the mosques in Jerusalem, Israelis, it seems, just settle back into the living room armchair to sigh and cluck in sadness.

And no matter how many times the international community votes to deny Israel’s patrimony in Jerusalem or fails to acknowledge Israel’s incredible contributions to global health, science and security, the Israeli government, it seems, takes it on the chin. Israel didn’t even think about withdrawing from UNESCO until Trump led the way.

You have to wonder: When will we learn to harness the vitality of anger, instead of marching in place and waiting for the next blow to land?