Published in The Jerusalem Post and Israel Hayom, December 15, 2017.

After recognizing Jerusalem, America’s next move should be banishing the EU from regional diplomacy. 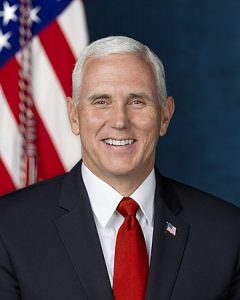 Dear US Vice President Mike Pence: As you ready to visit Israel, next week, I ask you to take a few minutes to contemplate history and to think about fate.

Before plunging into the murky waters of the Mideast, take a step back and consider the moment. Just what does it mean to be Vice President of the United States, the leader of the free world, Israel’s best friend on the globe? What does it mean to be arriving in united Jerusalem on Chanuka, and just before Christmas, in Israel’s seventieth year?

It means, I think, that one has to think in Providential, prophetic terms. In this holy city you are challenged to fathom the processes at work behind the curtain of current affairs; to discern mystic movement, Divine drama, at play; to understand the State of Israel and its struggles in grand historical terms. I’m sure that you know and feel this.

History knows no parallel to the prophecies of the Bible, which foretold of Jacob and Joseph’s exile, of the break-up of a people into a thousand pieces across the world, to every culture and civilization – yet destined not to assimilate, but to return. You are witness to metaphysical union spanning centuries, between a people, their God, and a land – defying all odds.

And thus the establishment of Israel as a modern nation-state anchored in a concrete cultural-religious identity is more than a political or secular event in Jewish, or indeed in global, consciousness. Israel stands as vindication of the spirit; as validation of the tenaciousness of faith.

These ancient convictions, symbolized by the Chanukah lights, explain much about Israel, even today. They explain why we sometimes cling to forlorn hilltops and old-fashioned principles, stubbornly refusing to recognize the rational calculations of diplomatic cost and benefit; calculations that are impressed on us by well-meaning allies, sometimes less-than-politely.

It explains why those who consider history only in terms of national politics and international relations underestimate or misjudge us. They fail to understand that Israel is guided by an astral calculus that is not always perceptible, a reckoning that blurs the line between aspirations and reality.

You, Mr. Vice President, are an integral part of this otherworldly reckoning. You represent the country that, more than any other, has championed liberty and religious freedom the globe over. You lead the nation that has most consistently backed Israel through adversity.

And you personally have acted to strengthen the US-Israel partnership; most recently by forthrightly leading the drive for long-overdue US diplomatic recognition of Jerusalem as Israel’s capital.

For this, Israelis admire you.

ISRAELIS SALUTE YOU, as well, for ignoring the snickers of other world leaders, who this past week so roundly criticized America for recognizing reality and beginning the process of moving the US embassy to Jerusalem.

Consider, for example, Federica Mogherini of the European Union, who this week didn’t even try to hide her disdain for President Trump and for Israeli Prime Minister Netanyahu. Speaking after Netanyahu left Brussels, she sneered that “nobody” was going to follow the US lead on Jerusalem.

Take at look at the video of her press conference. Speaking as a grand high commissioner of Europe – which has a 2,000-year history of vicious anti-Semitism and which 75 years ago was saved by American troops from homegrown European Nazis – Mogherini mocked America in disparaging tones and literally smirked as she scoffed at Netanyahu.

She proceeded to dictate European expectations for urgent, full-fledged Palestinian statehood including a capital in eastern Jerusalem, and to threaten that Europe wouldn’t wait too long before yet again launching its own peace “offensive.”

In arrogant European-speak, this of course means a new campaign of pressure on Israel for unilateral West Bank withdrawals, and the granting of additional diplomatic and financial goodies for the Palestinians without any expectation of Palestinian diplomatic moderation or flexibility.

Old habits, it seems, die hard. European countries have a knack for judging and moving Jews; for restricting Jews to specific pales of settlement; and for showing a softer side to Israel’s adversaries.

Having failed so spectacularly in promoting in Palestinian maturity or good governance over the past 20 years – despite the billions of Euros that Mogherini’s minions have invested in the Palestinian Authority and in Israel-bashing human rights NGOS worldwide – you would think that the EU would adopt some humility.

But no. The EU has taken to regularly shelling-out threats to downgrade diplomatic and economic ties with Israel, unless Israel does this or desists from doing that.

And boycotting Israeli settlement products no longer suffices for Brussels. Ramping-up its confrontation with Israel, the EU has gone into the business of establishing tower and stockade-style settlements for the Bedouin and Palestinians in Judea and Samaria – with the explicit intent of eroding Israeli control of Area C and especially the Jerusalem envelope.

Oh, and concomitantly European governments and companies are rushing to embrace the Iranians (because there is big business to be done), while ignoring Iranian terrorism, Iranian missile advances, and Iranian military moves in Syria and Gaza against Israel.

It is time to wipe that smirk off Mogherini’s face. America should withdraw from the “Quartet” which gives the patronizing European Union (and the hostile United Nations) a formal role in Mideast peace diplomacy, and instead lead its own creative initiatives.