Pushing-back against Palestinian denialism and global defamation of Israel.

Published in The Jerusalem Post and Israel Hayom, December 8, 2017.

The Palestinians and the Europeans brought Trump’s Jerusalem declaration on themselves by running an ugly campaign of denialism and denigration against Israel. Their brazen persistence in delegitimizing the Jewish People’s historic roots and rights in Jerusalem led to this defiant and ultimately honorable result: a re-assertion of reality. 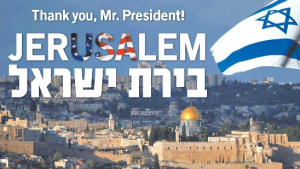 The Palestinians have no-one to blame except themselves for President Donald Trump’s declaration regarding Israeli sovereignty in Jerusalem. The same goes for European leaders, who were so busy this week condemning Trump’s move.

The Palestinians and the Europeans brought this on themselves by running an ugly campaign of denialism and denigration against Israel. Their brazen persistence in delegitimizing the Jewish People’s historic roots and rights in Jerusalem led to this defiant and ultimately honorable result: a re-assertion of reality.

Consider: Over the past ten years, and certainly since he rejected John Kerry’s 2014 peace initiative, Mahmoud Abbas’ Palestinian Authority has been on an outrageous path; an assault on the core identity of Jews and Israelis; an offensive to deny the most fundamental, basic building blocks of Jewish connection to Jerusalem and the Land of Israel.

At Abbas’ express urging, UNESCO has adopted insane and nonsensical resolutions declaring Jerusalem an exclusively-Moslem heritage city, and criminalizing Israel’s custodianship of the holy city. Most of Israel’s European allies went along with this affront, either voting for or abstaining on the resolutions.

So what do you do when the Big Lie is evident everywhere, and no-one seems to care about the truth? What do you do when Abbas repugnantly engages in gross inversions of reality, and says that Israel is “paving the way for bitter religious conflict that he doesn’t want” – when, in fact, he is driving the conflict, not Prime Minister Netanyahu or Israel?

What do you do when Abbas shamefully, regularly and falsely accuses Israel of committing “violations” against Islamic and Christian holy sites, including the Al-Aqsa mosque on the Temple Mount – when it is his Wakf (Moslem Religious Trust) that has turned Al-Aqsa into an armed fortress and turned every Jewish visit to Judaism’s holiest site into a skirmish?

What do you do when it his Wakf that wantonly has dug-up and destroyed thousands of years of Jewish archeological treasures on the Temple Mount, and the world has stood by without protest? What do you do when Abbas’ people have destroyed Joseph’s Tomb, sought to destroy Rachel’s Tomb, and have run Christians out of Bethlehem?

You change the way Israeli (and hopefully now, American!) diplomats present Israel’s case by emphasizing Israel’s legal, historic and religious rights in this land – not just our security needs. You don’t forfeit to the Palestinians the international discourse regarding human, national and civil rights, especially regarding Jerusalem.

You push back by declaring – indeed, against the advice of all inveterate peace process experts and high-and-mighty European commissioners – that Jerusalem is Israel’s capital, plain and simple.

What do you do when Abbas has the chutzpah to call for “international protection for Palestinians in Jerusalem against assaults by the occupation army” and accuses Israel of “executing” teenage Palestinian terrorists – when it is Israelis who have to be afraid of Palestinian stoning, knifings and shootings in every corner of this country and who are (uncomfortably and heroically) restraining themselves from unleashing the full force of Israel’s army?

You demonstrate resilience. And you ask your good friends in the US, be they Republican or Democrat, Evangelical or secular, to defend you; to affirm that Jerusalem is indeed Israel’s capital.

What do you do when UN Secretary General and the Pope swallow every bit of Abbas’ bile about exclusive Arab rights in Jerusalem, while ignoring his concomitant denial of Christian history in Jerusalem? What do you do when they mealy-mouth denounce “hateful discourse on both sides” – when there is no moral equivalence between Israeli and Palestinian discourse and no factual equivalence between Israeli and Palestinian propensities to violence?

You don’t go running scared. You make the determination not to be cowed by yet more threats of Palestinian rage, fury, frenzy, fuming, delirium and other sundry forms of hurt feelings. You resolve not to melt from adopting moral policies just because of Arab stoning, stabbing, bombing and other forms of bullying.

What do you do when the President and Secretary of State of your main ally, Barack Hussein Obama and John Kerry of the blessedly-expired previous American administration, doubt Israel’s sincerity in maintaining calm on the Temple Mount and cast aspersions on the defensive measures taken by the Israel Police and IDF in retort to Palestinian terrorism – when in fact Israel has super-studiously (and I think too diligently) maintained the status quo on Har HaBayit, and its security forces have acted with ultra-restraint in response to Palestinian atrocities?

What do you do when they untruthfully blame Israeli “settlements,” expressly including home construction in Jewish Jerusalem, for the failure of their botched peace process, and then liver-lily abstain as the UN Security Council savages Israel, and only Israel, for obstruction of peace diplomacy?

You pray for new leaders in the US who will right the wrongs; who will defy the rotten and callous consensus; who will be willing to introduce a dose of realism and truth-telling to the Arab-Israeli dynamic; who will be brave enough to say, at least, that Jews have profound rights in Jerusalem and that the US recognizes the indisputable fact that Jerusalem functions as Israel’s capital, justifiably so. And that the American embassy will move to Jerusalem (as should all embassies).

You pray that somebody with the gumption of Trump will come along and become president of the United States.