Published in The Jerusalem Post and Israel Hayom, November 17, 2017.

The application of de facto sovereignty and governance on the ground is the core of political action that can keep Jerusalem whole. The struggle for sovereignty in eastern Jerusalem has transitioned from ‘Jerusalem on High’ – meaning, high-powered political summits in Oslo and Annapolis, to ‘Jerusalem of Below’ – meaning, the decent conduct of daily life in the city for Arab and Jewish residents alike. 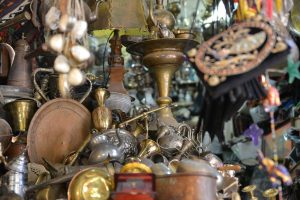 Earlier this week, Jerusalem municipal officials and workers swept overnight into A-Tur on the Mount of Olives to clean up the neighborhood.

The police also combed through the neighborhood with ready lists in hand, to confirm that people under house arrest were really home. They found an illegally held M1 rifle, and arrested 20 Arab eastern Jerusalemites suspected of throwing rocks and firebombs at civilians and police.

“The campaign is designed to firmly handle anybody involved in criminal offenses, [violations of] public order and terrorism, while at the same time improving the lives of the regular, law-abiding residents of the neighborhood by arresting people who violate public order and break the law,” the police said.

At a conference last week on the “Challenges of United Jerusalem” conducted by the new Jerusalem Institute for Strategic Studies (JISS), Jerusalem District police commander Maj. Gen. Yoram Halevy said that these operations are meant to create balance. “We want to show the residents of eastern Jerusalem that those who’ve done wrong will be treated as such and those who’ve done good will be rewarded.”

He said this was part of the implementation of a new strategy by the Jerusalem District Police to shift its power from only “chasing the bad guys” to also “nurturing the good guys,” so that the latter “can help the police help them.”

It is quite clear to me that there is more to this strategy than just “nurturing the good guys.” The enforcement operations are clearly part of a broader plan to ensure effective and equitable Israeli rule over united Jerusalem.

They aim to push back against proposals for cutting Arab neighborhoods out of the Jerusalem municipality or for handing them over to the Palestinian Authority.

Jerusalem Mayor Nir Barkat admitted as much at the JISS conference. “There is no municipal or political authority that can administer Jerusalem and service its residents, Arab and Jewish, better than the Municipality of Jerusalem,” he averred.

“I am committed to reducing the disparities and improve the level of services and infrastructure in Arab neighborhoods. We are investing more than NIS 50 million this year in the eastern parts of the city with an emphasis on roads, and will be investing NIS 500 million in classrooms over the coming decade,” Barkat said.

Barkat’s advisor on Arab and Christian affairs, Dr. David Koren, laid out the broader philosophy for Barkat’s approach in a detailed talk and 6,000 word article. He says that governance and sovereign rule in eastern Jerusalem requires a quantum leap in the level of services provided by Israel, alongside effective community policing efforts.

“The struggle for sovereignty in Jerusalem has transitioned from ‘Jerusalem on High’ – meaning, high-powered political summits in Oslo and Annapolis, to ‘Jerusalem of Below’ – meaning, the conduct of daily life in the city.”

“The real limits to control and sovereignty in Jerusalem are not determined in clandestine talks between unnamed high-ranking officials, but rather by demarcating the area of ​​activity of the municipal street cleaner, the youth counselor at the local community center, the building inspector, the road engineer, the policeman and the social worker, who provide services for the residents and are clearly identified with Israeli institutions.”

Koren goes on to explain that eastern Jerusalem residents possess an intense desire for “permanence” and a clear resolution of their affiliation, whether to Israel or to the PA. Broad sectors of the Palestinian public hold a pragmatic attitude about Israeli authorities, he says, and they see Israel as the only possible source for solving their problems and turning their lives around.

A clear example of this is in the area of education. There is a struggle between parents’ committees; between those that support the introduction of the Israeli curriculum for schools in eastern Jerusalem with the aim of broadening their children’s educational and professional horizons, and those affiliated with the PA who wish to preserve the Palestinian curriculum due to its national characteristics.

Barkat seems to be making progress in this regard. The number of eastern Jerusalem students who opted for the Israeli matriculation curriculum jumped by 20% this year; up from 300 to 5,800 students over seven years.

Similarly, Jerusalem Palestinian youth are torn between a growing number of colleges providing Hebrew classes with advanced professional training, and Fatah sports and cultural clubs with new budgets from the PA, or Islamic outreach centers sponsored by Turkey – where they are taught “struggle.”

Another sovereign act of the first order is in the area of ​​planning and building. The municipality just approved a master plan for home building in Sur Baher and Umm Tuba. Right-wing elements in the city opposed the plan, but Barkat and Koren argue that such advances for the benefit of eastern Jerusalem Arab residents is exactly what will keep Jerusalem whole and under Israeli sovereignty.

Along the same lines, the Israel Police is advancing a new security concept for enhanced police presence in eastern Jerusalem, through five integrated policing centers which provide civilian community services to Arab neighborhoods.

At the same time, Barkat and Halevy don’t mind admitting that when necessary, they have and will use tax collectors and building inspectors to “punish” bad behavior.

During the riots last summer in Jerusalem which were led by residents from some particularly nasty clans in Issawiyah and Jabel Mukaber, the city blocked the exits from these neighborhoods and sent in inspectors (accompanied by police) who fined and penalized for every possible municipal infraction. When multiple families in the clan get hit hard for back taxes and utility bills, and are pinned for social security fraud – all of a sudden the neighborhood goes quiet and the disturbances peter out.

In short, the application of de facto sovereignty and governance on the ground is the core of political action that can keep Jerusalem whole.