My semi-annual guide to good drinking of current kosher Israeli wines. I comment on wines from Gross, La Citadelle de Diamant, Eshet Lot, Covenant, Galil Mountain, Livni, Teperberg, Montefiore, Tura, Carmel, Yatir and Flam wineries. To all readers who haven’t yet learned to appreciate the fine wines of Israel, I say that it’s time for you to do teshuva, to repent! 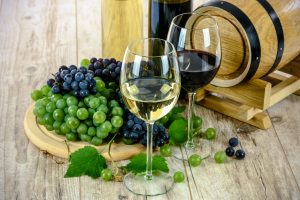 In his famous 12th century theological treatise, Rabbi Yehuda Halevi explains to the mythological Khazar king that Judaism is not ascetic. On the contrary, he says, Jewish life is meant to be lived through beauty, bounty and joy; and if delight is channeled through the right Torah principles, this can lead to true cleavage with the Almighty.

Drinking quality wine on religious holidays, at a festive meal accompanied by serious conversation and contemplation amongst friends and family, is a path to such bliss. Yes, even on Rosh Hashana, one can purify the soul and cleanse the mind by moderately imbibing!

To this end, I offer my semi-annual guide to good drinking of current kosher Israeli wines. And for all readers who haven’t yet learned to appreciate the fine wines of Israel, I say that it’s time for you to do teshuva; to repent.

Let’s start by looking at some new wines.

Etrog grower Yehuda Dov Gross of Moshav Nehalim is now the owner and winemaker of a garagiste winery which sources its grapes in the outstanding Kadita vineyards near Meron in the upper Galilee. His Onyx and Black Onyx wines, dominated by Cabernet Sauvignon, are a joint venture with wine personality Oded Shoham, one of the most experienced figures in the Israeli wine trade (israelwinexp.com). Released only three months ago, the 8,000 bottles of their Gross Family Winery 2014 vintage are concentrated and exact. Perhaps the closest wine we have to a kosher Margalit wine!

La Citadelle de Diamant is another new winery, based in Kfar Ruth near Modiin, founded by Israeli-French businessman Laurent Emsellem. It specializes in Provence-style Rosé wines, but I like its heavier and spicier 2016 Marius Cabernet. This is a profound red made from grapes grown in the Golan Heights, packaged in a unique heavy bottle with gold lettering printed on the glass.

Eshet Lot (Lot’s Wife) is the unusual name of the first kosher run produced by Ze’ev Dunia of the celebrated Sea Horse Winery. The quirky name is typical of the free-ranging Dunia. Notwithstanding, it is one of most deliciously-deep Syrah wines I have drunk in Israel, from grapes grown in 2014 in the Dalton and Ben-Zimra vineyards. Hoard it, if you can find it.

Jeff Morgan’s distinguished California-based Covenant Winery has now released some Israeli-produced wines, including a rich and firm 100 percent Syrah from the Tel Faris vineyards, and “Blue C” Syrah-Cabernet, Viognier and Rose wines. The reds are a bit high in alcohol (15.4%), heavily-oaked, and expensive, but worthwhile.

The Galil Mountain Winery has a new, pricey flagship wine, a 2014 Merlot (with 5% Petit Verdot) from the Yiftach vineyards, oak-aged for 18 months. Galil’s Yiron Bordeaux blend and Meron Syrah blend are perennially-excellent. I also like the lighter Ela 2014 Barbera (with some Syrah, Petit Verdot, and Cabernet Franc).

Menachem Livni’s vineyards in Calev’s Field near Hebron and Moshav Carmel are the most heavily fortified vineyards in the Land of Israel. Local Arabs have sought to destroy his crop dozens of times. His 2013 Pinot Noir is planted atop limestone at 900 meters above sea level, and is one the best Israeli Pinots (– there aren’t many).

Matar is the kosher label from Tal Pelter’s winery on Kibbutz Ein Zivan in the northern Golan Heights. Wine Spectator scored Matar’s 2013 Cumulus blend of Cabernet, Merlot, Cabernet Franc and Petit Verdot at 90 points, and I think the 2015 blend is even better. In fact, it was the best wine poured at this summer’s Israel Museum Wine Festival, I think.

The top level offerings from Teperberg Winery rank among the finest-crafted wines in Israel. (Producing over five million bottles a year, Teperberg has grown way beyond its 1870 family origins). The 2012 Legacy Petite Sirah from the Ayalon Valley is super dark and lusciously chewy with herbal and black pepper overtones. The 2014 Impression Cabernet and Inspire Meritage blend are enchanting too.

An up-and-coming winery is Montefiore, a boutique Jerusalem-based winery run by heirs to the Sir Moses Montefiore family name, including Rachel, David and Adam Montefiore. The Montefiore 2012 Petite Sirah is succulent, and its flagship Kerem Moshe blend is complex and holds potential. The winery just opened a tasting room in Jaffa, not far from the familiar clock tower.

Vered and Erez Ben-Saadon’s Tura Winery in Rehelim, near Nablus, is a highlight of any tour in Samaria. It has earned many enthusiastic fans in the kosher wine world. I recently enjoyed Tura’s top-level 2013 Mountain Peak, blended from Bordeaux varietals grown on Har Bracha, 850 meters above sea level; and a sleek new white wine with a slight fizz called Snow, blended from Viognier, Sauvignon Blanc and Chardonnay grapes.

For a taste of Israeli innovation in winemaking, try Carmel Winery’s 2012 “Mediterranean,” a creative blend of Shiraz, Petit Verdot, Carignan, Petite Sirah, Malbec and Viognier, from vineyards from all over Israel including the Upper Galilee, Coastal Plain, Judean Hills and the Negev. Round and rewarding.

The very finest wine of the Negev is, of course, the Yatir Forest (a Bordeaux blend), which received the incredible score of 93 in Robert Parker’s Wine Advocate magazine – the leading global wine publication. My wife and I recently enjoyed a tasting of Yatir wines at the winery near Tel Arad, led by my friend, the founding CEO Ya’acov Ben-Dor.

Speaking of the eminent Flam Winery, I’ve been twice privileged to enjoy flight tastings of its exceptional reserve wines, for the 2011, 2012 and 2013 vintages. Golan Flam has a very steady hand, which shows in all the wines: aromatic, elegant, precise. The 2013 Syrah is spicy; 2013 Merlot is fruity; 2013 Cabernet is sweet and concentrated.

The 2013 Flam flagship wine, called Noble, is a Cabernet-Merlot-Syrah-Petit Verdot blend aged in lightly-toasted barrels for 20 months, which just went on sale. It was served in a unique Zalto Denk’Art glass – sort of a mini-decanter, imported by Flam from Austria – which was an experience in itself. Golan Flam is moving towards a greater emphasis on regional terroir, and future Nobles may be sourced in the Judean Hills, instead of the Galilee.