Published in The Jerusalem Post and Israel Hayom, July 28, 2017.

Israel must flex some muscle to disabuse Abbas of the delusion that he can bully Israel into retreat. Tactical Israeli restraint, like the decision to retreat from justified security measures at the Temple Mount, comes-off as capitulation to Palestinian terrorism. It reinforces the rejectionist and triumphalist Palestinian narrative. It looks and smells like appeasement. Winston Churchill warned that “an appeaser is one who feeds a crocodile, hoping it will eat him last.” So it’s time for a different strategy. Palestinian overreach and superciliousness should be countered by strong Israeli and international counter-measures. Israel should unsheathe its sovereign power and put the extremists down; decisive action that one day might allow for Palestinian moderates to emerge. 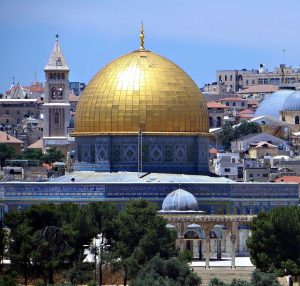 The Palestinian Authority and its fiendish intra-Palestinian Islamic rivals seem hell-bent on brinkmanship; on being belligerent adversaries with escalating, maximalist demands of Israel.

They really think they can roll Israel back by recourse to street brawls and international courts; by brow-beating Israel through aggression, isolation and criminalization; by demonizing Israel with outrageous lies like “al-Aqsa is in danger.” They think they can conduct guerrilla and diplomatic warfare against Israel with impunity.

It’s time to disabuse Mahmoud Abbas and these gangs of such delusion, through resolute Israeli action.

The holy war over Har HaBayit (the Temple Mount) that Abbas is promoting tells Israelis that Palestinian society has gone crazy-radical-rogue Islamic – just like much of the Arab Middle East. This spells the end of the two-state solution as Israelis (and most Western policy-makers) understood it. Because the one thing that Israel absolutely cannot countenance is the emergence of a madcap Islamic caliphate in Jerusalem and Judea and Samaria.

Sinai-stan, Hamas-stan, Hezbollah-stan, and Syria-stan already have emerged on Israel’s southern and northern borders. This is more than enough for Israel to handle. A Pales-stan on Israel’s eastern border would be unbearable. Israel can’t and won’t let it rise.

The only Palestinian state in the West Bank that Israelis ever contemplated was a mature entity willing to reconcile ideologically with Israel, leading to the reasonable sharing of land, airspace, natural resources, and historical and religious sites.

The sharing includes the Temple Mount. Indeed, for there to be peace, Jewish prayer would have to be facilitated on the Temple Mount, alongside the prayers of other faith-traditions too!

Alas, Abbas has made it clear that the Palestinian national movement is far from understanding this.

The only Palestinian state that Israelis ever envisioned would not threaten Israel’s security, obviously. This means that it would be truly demilitarized with Israeli supervision on all borders and at all holy places. It would not form hostile foreign alliances or allow radical Islamic groups to dictate the internal agenda. It would not rev-up violent insurrection when it has a difference of opinion about management of a city or a holy site.

Alas, Abbas has made it clear that the Palestinian national movement is far from accepting this.

The only Palestinian state that Israelis ever thought of tolerating in Judea, Samaria and Gaza would declare a permanent end to the conflict and all claims against Israel. This means recognizing Israel as the nation state of the Jewish People and recognizing ancient Jerusalem as its capital. It means renouncing the so-called “right” of refugee return, and inculcating respect, not anti-Semitism, on Palestinians airwaves and in Palestinian schools.

Alas, Abbas has made it clear that the Palestinian national movement is far from internalizing this.

On the contrary, Abbas has made it clear that the Palestinian liberation movement will never recognize Israel as a Jewish state nor forgo refugee return. In other words, he wants his state, but without an end to the conflict. He seems to want a Palestinian state to continue the conflict.

Prof. Ahmad Khalidi, a Palestinian ideologue close to Abbas, scorns the two-state solution as a “sovereign cage.” “The concept of Palestinian statehood is nothing but a punitive construct devised by our worst enemies – the United States and Israel – to constrain Palestinian aspirations and territorial ambitions,” he has written.

UNTIL NOW, Israeli governments have sought to co-opt Palestinian leaders into peace and to mollify Palestinian masses through compromise and concession, including the provision of Israeli money, guns, water, electricity and many aspects of national sovereignty.

This could have been a path to enhanced Palestinian national power in cooperation with Israel. But the kleptocratic Palestinian Authority has pocketed these goodies without showing any true willingness to meet Israeli needs and expectations.

As a result, tactical Israeli restraint, like the decision to retreat from justified security measures at the Temple Mount, comes-off as capitulation to Palestinian terrorism. It reinforces the rejectionist and triumphalist Palestinian narrative. It looks and smells like appeasement.

Winston Churchill warned that “an appeaser is one who feeds a crocodile, hoping it will eat him last.” So it’s time for a different strategy. Palestinian overreach and superciliousness should be countered by strong Israeli and international counter-measures.

Palestinian leadership must be disabused of the notion that it can drive Israel off the Temple Mount and out of eastern Jerusalem by violence, or coerce Israel into withdrawals by appealing to international tribunals.

This will require perseverance and the flexing of muscle.

To begin with Israel can stop doing favors for the Palestinian Authority like absorbing its mushrooming debt for electricity and fuel, or selling it water at discount prices. Then Israel should stop facilitating the business interests of Abbas’ cronies, whose cartels control the Palestinian economy. The international donor community, too, might usefully rethink the huge sums of cash it pours into Abbas’ coffers every year.

Then Israel can and should revoke the VIP permits that allow Abbas and his ministers to fly in and out of Ben-Gurion Airport on their luxury private jets. Let them beg King Abdullah in Amman for travel privileges.

Simultaneously, Israel should arrest the activities in eastern Jerusalem of rabble-rousers like Sheikh Ekrima Sa’id Sabri, the lead agent in the city for Erdogan’s Turkey and the Moslem Brotherhood; Sheikh Issam Amira, the lead agent in the city for the Islamic Liberation Party (Hizb ut-Tahrir); and Abbas’ hand-picked henchmen, the intemperate Temple Mount Mufti Muhammad Hussein and the fanatic former chief justice of the PA’s religious court, Sheikh Tayseer Al-Tamimi.

Their sermons, “charitable” enterprises and educational programs glorify terrorists and explicitly call for violent resistance to Israel. Their networks (along with Fatah social media) also are the source for the libel that al-Aqsa is at risk.

It’s also not too hard to arrest two thousand of their key street activists – those leading the riots in the city.

Israel should unsheathe its sovereign power and put the extremists down; decisive action that one day might allow for Palestinian moderates to emerge.