Published in The Jerusalem Post and Israel Hayom, June 2, 2017.

The malevolent influence of Erdoğan’s Turkey is a growing threat in eastern Jerusalem and on the Temple Mount. 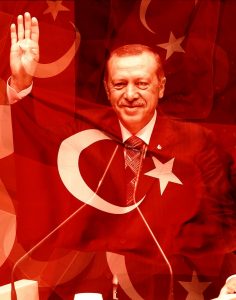 The fireworks and fanfare of the Jerusalem liberation jubilee have shoved under the radar a blockbuster expose about the unruly situation in eastern Jerusalem. Alarm bells should be ringing about the nefarious intensifying involvement of Erdoğan’s Turkey and other radical Islamist groups in eastern Jerusalem political and social affairs.

Dr. David Koren and Ben Avrahami are the advisors on eastern Jerusalem affairs for the Municipality of Jerusalem. They lead the municipal team that oversees all of Jerusalem City Hall’s interactions with the Muslim and Christian populations of the city. They are intimately familiar with the thicket of contradictory interests, tensions, and disagreements that inform daily life in earthly Jerusalem.

The two experts have just published a rare, breathtaking and shocking description of political trends in eastern Jerusalem. Their article, “Eastern Jerusalem Arabs Between Erdogan and Israel,” published in the new, important Hebrew intellectual journal Hashiloach (Vol. 4, May 2017), offers a brief account of the fruits of normalization and East Jerusalemites’ increasing integration into the Israeli scene, But mainly it serves as a wake-up call regarding countervailing toxic trends.

According to Koren and Avrahami there has been very significant erosion in the status of the veteran eastern Jerusalem mukhtars and the influence of Fatah political infrastructures and Palestinian Authority leaders. Into the vacuum have stepped elements identified with Hamas, with the northern faction of the Islamic Movement in Israel, and with the Muslim Brotherhood in its wider context.

Through a series of civic associations, nonprofits, and grassroots organizations, sometimes at the neighborhood level and sometimes more extensive, they are investing tens of millions of dollars per year in dawa (missionary) activities, mainly charitable enterprises and educational programs to attract the young to Islamic values.

There is a direct line, say the article authors, from civic dawa to radicalization and active enlistment in the armed struggle against Israel. This includes active social networking which glorifies terrorists, martyrs, and prisoners, and explicitly calls for violent resistance to Israel. These networks were also the source for the libel that al-Aqsa is endangered by the Jews/Zionists, and for dissemination of an incredible volume of disinformation related to Israeli actions on the Temple Mount.

The authors ask for particular attention to the mounting involvement of Erdoğan’s Turkey, which is the worldwide Brotherhood’s main patron. Turkey now enjoys unprecedented popularity among the residents of East Jerusalem, the authors write. The Turks’ public support of the Palestinian cause and adoption of the al-Aqsa issue, and their decision to inject millions of dollars into East Jerusalem, have won them great sympathy and support.

The Turks fund a great part of the dawa activities in the city, with Sheikh Ekrima Sa’id Sabri as the lead Turkish agent. (He is a former grand mufti of Jerusalem appointed by the PA and today the most prominent representative of the Muslim Brotherhood in the city). The Turkish consulate in Jerusalem, the Turkish government assistance agency, and a string of Turkish organizations that have local branches in Israel or the West Bank, are directly implicated in this subversive activity too. As a result, Turkish flags today fly everywhere in eastern Jerusalem and prominently on the Temple Mount as well.

The Turks also have injected significant sums to those who do their bidding on the Temple Mount, for various activities such as Quran-recitation groups, transportation of worshipers to and from the mosque, iftar feasts in Ramadan, renovation and cleaning campaigns, and the like. In general, the Islamist forces on the Temple Mount operate, intentionally or not, to Turkey’s benefit and the detriment of Jordan. They may believe that the replacement of the Jordanian presence by a Turkish presence would be a positive and welcome development.

The main loser here is Jordan, which long enjoyed the status of Guardian of the Holy Places and protector of the Arabs of Jerusalem. This also is the context of the PA’s intensive activity in the international arena, and especially at UNESCO, ostensibly intended to protect the Islamic holy places against an Israeli takeover. This tactic allows the PA to convey to its critics that it is the true defender of al-Aqsa and Jerusalem against the threat of “Judaization,” while at the same time gnawing at Jordan’s historic role as guardian of the Mount and seeking to counteract the emerging Turkish dominance in Temple Mount affairs.

Attention should be devoted also to another mounting force in Jerusalem, the Islamic Liberation Party, or Hizb ut-Tahrir, which has several thousand supporters in the city. This Salafist group, like ISIS, seeks to proclaim a global Islamic caliphate from al-Aqsa. It has acquired growing influence on college campuses throughout the West Bank, including al-Quds University near Jerusalem. Sheikh Issam Amira of the al-Rahman Mosque in Beit Safafa is the group’s most conspicuous preacher, and he enjoys freedom of activity and speech on the Temple Mount.

While the Liberation Party does not advocate violent jihad, some party members could “advance” from a Salafi mindset to a Salafi-jihadist outlook and join the ranks of ISIS. This may explain, say Koren and Avrahami, the presence of ISIS cells and ISIS operatives in Jerusalem, such as Fadi al-Qunbar, who carried out the terrorist truck-ramming attack in East Talpiot in early 2017, and the ISIS cell that was apprehended in the Shuafat refugee camp several months earlier.

In short, the disintegration of Palestinian secular nationalist organizations and institutions in eastern Jerusalem, alongside Israeli torpor, has facilitated the rise of Islamist factions and hostile foreign actors.

The enlarged foreign presence in the heart of Israel’s capital touches the deepest chords of the issue of Israeli sovereignty in the eastern part of the city. Koren and Avrahami warn that this presence cannot be easily eliminated. While significant security action and determined diplomatic maneuver are clearly mandated, Israel will have to do more to “recapture” eastern Jerusalem. It will have to assume full responsibility for the services that eastern Jerusalem Arab residents need, with major budgetary repercussions.

In a future article, we will look at the remedies for this situation being implemented by Mayor Nir Barkat of Jerusalem (and more still required) in order to increase eastern Jerusalem Arabs’ sense of belonging to a united Jerusalem. Also to be considered are the complicated proposals coming from the political Left for re-districting of the city into independent boroughs or divesting some Arab neighborhoods to the Palestinian Authority.