Letter from a tomato

Published in The Jerusalem Post and Israel Hayom, April 28, 2017.

Listen to the tomatoes. They are bearers of a Divine message: That G-d has re-juiced the Land of Israel so that the Jewish People can come home and live in plenty. “There is no greater sign of redemption than the agricultural re-blooming of the Land of Israel.” 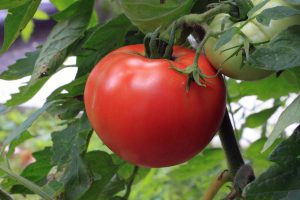 The tomatoes, oranges and eggplants of this land have a grand story to tell, and in advance of Yom Haatzmaut, Israel’s Independence Day, they have released a letter addressed primarily to the Jews of the Diaspora. Here it is.

“We, the vegetables and fruits of the Land of Israel want Jews to know what a dramatic transformation has been wrought over the past century in our subterranean world.

“You see, after the destruction of the Second Jewish Commonwealth in 70 CE a message came from Heaven to all the flora and fauna of this land – to stop growing.

“The word spread from cedar to hyssop, from vine to olive, from flower to grain – full stop! Everything must go dormant, we were told. A slumber was slapped on the Land of Israel. Only when the Jewish People would return and upon direct instruction from the Almighty, would we be allowed to rev up our biological engines and begin producing anew.

“We were very sad to see our people going off into exile, but we heeded the word of G-d. We also knew that He had forewarned of this in Leviticus (26:32), telling the Jews that if they messed up their state and society, exile would ensue and that He “would make the land desolate.”

“Indeed, we were told not to respond with any enthusiasm to foes of Israel who entered the land, and we obeyed. Over the centuries there were many foreign invaders: Romans, Byzantines, Moslems, Crusaders, Turks and more. They all came and we did not react to their attempts to bring us to life. The land remained barren.

“During that long interlude, there were moments at which we thought our misery was coming to an end. We thought that our children were coming home. In the twelfth century, we heard reports that ‘they are coming.’ Three hundred Tosafots came from the Rhineland, but no more.

“False alarms continued. Nachmanides arrived in 1267, Ovadia of Bartenura in 1492, Yehuda HaChassid and his followers in 1700, then the students of the Baal Shem Tov and the students of the Vilna Gaon. But we received no green light from G-d to begin growing again.

“So, we, the Indigenous Fruits of the Land of Israel, waited. We hoped and we prayed for the return of this land’s Indigenous People.

“Then, toward the end of the 19th century rumors again began to race beneath the surface of the earth. Birds flying overhead and clouds cruising the skies said, ‘They are coming.’ And then the great command came directly from G-d: ‘O mountains of Israel, shoot forth your branches, and yield your fruit to My people Israel; for they are at hand to come’ (Ezekiel 36:8).

“Grow! Respond to the work of their hands! Make Israel great again.

“You should have seen the joy beneath the surface. There hadn’t been such activity in millennia. We awoke from hibernation, stretched our roots and smiled. We were directed to turn little, dry, arid, dusty, nearly dead Israel into a verdant, fruitful, agricultural world superpower.

“And the Lord further instructed us: ‘Don’t check the tzitzit of these returning Jews. It makes no difference whether they are religious or not. They are My children and they are coming home. Grow even in the shemita year, even using the heter mechira. Grow, impart your bounty, grow!’

“And oh, what fantastic vineyards we have given to the viticulturalists of modern Israel, from which world-class and holy wine is being vinified. Isn’t this just amazing?

IF YOU THINK IT FANCIFUL that plants communicate, think again. Modern science has discovered that plants share a unique communication grid through fungal roots of mycelium. It’s an underground information superhighway that allows trees, shrubs and vegetables to help each other out; sort of a plant internet. Scientists have dubbed this the “Wood Wide Web.”

And if you think it fanciful that G-d communicates with and through the plant world, think yet again. Jewish tradition attests to this.

The Talmudic sage Rabbi Abba taught (Sanhedrin 98a) that “There is no greater sign of redemption than the agricultural re-blooming of the Land of Israel.” Rabbi Yoel Sirkis (Bach on Tur Orach Chaim 208) wrote that the shechina, the Divine Presence, enters the Jewish soul through the agricultural produce of Eretz Yisrael.

Jews have become so enamored with cosmopolitan life they have forgotten how to hear Divine messages whispered through nature and history.

And yet, sadly, many Jews seem oblivious to these deep wisdoms.

Perhaps it is because Jews – like most modern people – are so deeply entrenched in their office blocks and iPads that they are unable to apprehend miracle-works in the zoetic world.

Perhaps it is because this generation’s spiritual sensors have been dulled by science and secularism.

Perhaps it is because Jews have become so enamored of cosmopolitan life, and in the process, have forgotten how to hear Divine messages whispered through nature and history.

The far-sighted Jerusalem educator Rabbi Sholom Gold (who developed the bulk of the “talking tomato” narrative presented above; and which I have adapted with his kind permission) says that we “should listen to our tomatoes.” They are bearers of a Divine message: that G-d has re-juiced the Land of Israel so that all His children can come home and live in plenty.

In his signature manner, Rabbi Gold offers this ardent, razor-sharp religious advice: “If you want to speak to G-d, go to the Western Wall,” he says. “But if you want to see Him, go to shuk Machane Yehuda.”