In Memory of Rav Aharon on his second yahrtzeit

To mark the second yahrtzeit (today, 1 Iyyar 5777) of Rabbi Aharon Lichtenstein zecher tzaddik livracha (of blessed memory), I am re-circulating a tribute to him that I wrote on his 80th birthday celebration four years ago. Yehi zichro baruch.

This was originally published with the title “Celebrating Complexity” in The Jerusalem Post on May 17, 2013 and in Israel Hayom on May 19, 2013. A shorter version was re-published upon his petira two years ago (The Jerusalem Post, April 21, 2015). 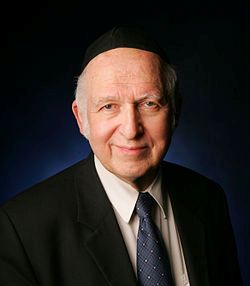 When practiced by the sophisticated modern man, Judaism is sourced in the most advanced and complicated thinking, not in amulets and kabbalistic incantations. Religion probes the most difficult quandaries of human existence, metaphysical presence and purpose, identity, and spiritual makeup. It seeks to bridge ancient devotions with contemporary sensibilities. It seeks to embrace both the particularistic and humanistic aspects of nationality.

It aims to authenticate and guide our creativity and drive for success in all fields of human endeavor.

It is more relevant and needed than ever in the modern age.

I learned much of this complex approach to religious thinking from Rabbi Dr. Aharon Lichtenstein, dean of the multi-faceted and magnificent Har Etzion hesder yeshiva in Gush Etzion. Last Friday, I was privileged to join more than 1,500 of Rabbi Lichtenstein’s students and alumni in a Torah conference marking his 80th birthday.

Since moving to Israel from America more than 40 years ago, Rabbi Lichtenstein has taught the highest-level Talmud, halacha and philosophy to his tens of thousands of students. He did so while simultaneously validating their service in the IDF as a religious obligation and their subsequent pursuits of university education as a natural outgrowth of their religious personalities.

Himself a former professor of English literature, he has taught that intellectual openness is a hallmark of true Orthodoxy, alongside single-minded devotion to Torah study and adherence to halachic boundaries and values.

Rabbi Lichtenstein has taught that critical thinking and humanism characterize the Oved Hashem (the worshipper of G-d), not slavish and blind devotion to self-proclaimed prophets and closed-minded soothsayers. He has taught that full involvement in Israeli society and a passion for social justice are key religious obligations, not the isolationism and jingoism that characterize too much of Haredi and ultra-nationalist religious Zionist communities today.

Rabbi Lichtenstein’s views are path-breaking on a range of critical issues, including the value of secular literature from a Jewish religious perspective, the nature of holiness, religious humanism, religious-secular relations, the role and status of women in studying Torah, attitudes to the non-Jew, the meaning of Zionism from a religious perspective, the methodology of the study of Bible and Talmud, Israel’s presence in Judea and Samaria, and more.

It’s not surprising that some of the boldest leaders of today’s religious Zionist community are students of his academy, Yeshivat Har Etzion. In his address at last Friday’s alumni gathering, Rabbi Lichtenstein pointedly devoted his remarks to exhorting his students to expend even greater effort on influencing the moral and religious character of Israeli society – through intellectual and social leadership, not coercion.

In all this, he draws on and develops the thought of his mentor (and father-in-law), the late, great Rabbi Joseph B. Soloveitchik, the greatest Jewish thinker and Rosh Yeshiva of the twentieth century. Rabbi Lichtenstein’s mature thinking was plumbed by Rabbi Haim Sabato in the recent book In Quest of Your Presence: Conversations with Rabbi Aharon Lichtenstein, and is laid out in Rabbi Lichtenstein’s previous books, Leaves of Faith, By His Light, and Varieties of Jewish Experience.

At the core of these works is Rabbi Lichtenstein’s deep love for G-d and his dedication to the learning of Torah as a supreme religious value, notwithstanding his appreciation of general culture, secular literature and scientific investigation. Aside from Rabbi Soloveitchik’s writings, there is no better articulation of devout faith – both child-like and super-erudite – for the modern man.

To mark his eightieth year, the Har Etzion yeshiva last week re-published eight volumes of Rabbi Lichtenstein’s breathtaking and very challenging lectures in Talmud. The printing is already almost sold-out; a testament to the profundity and uniqueness of his meticulous approach to Talmudic analysis.

No one could forget his devotion to his blind and mostly-deaf father, to whom he chanted the prayers out loud, and whom he led along the lanes of the yeshiva gardens with incredible patience. No one could fail to notice his sincere respect for his distinguished wife, Dr. Tovah Lichtenstein, and his attentiveness to the education and pioneering careers of his children.

Everybody learned from Rabbi Lichtenstein’s unassuming nature and tolerance; qualities that make his insistence on high moral and intellectual standards and ritual exactness all that much more impressive.

I remember being startled from my yeshiva bed at 4 am during the First Lebanon War by a hand that was shaking my shoulder. It was Rabbi Lichtenstein, making rounds of the dormitories to personally awaken his students for early Talmud class, so that he could fly-off to southern Lebanon just after 7 am prayers to visit his students on the battlefront.

When the Rosh Yeshiva himself pulls you out of bed because he can’t imagine cancelling a Talmud class, you don’t dare roll-over and go back to sleep! And you learn a lesson or two in self-discipline, dedication, and comradeship.

I suspect that in his self-effacing way, Rabbi Lichtenstein is enormously proud of the alumni who have absorbed his nuanced teachings; who view him as a revered leader yet dare to pave their own ways within Orthodoxy; who seek both to emulate and go beyond him.

To my own sons and daughters (one of whom also studied in Rabbi Lichtenstein’s yeshiva), I say: Seek the rich life of religious rigor, constant study, broad-mindedness, and societal commitment that Rabbi Lichtenstein so bravely modeled for us.