Published in The Jerusalem Post and Israel Hayom, April 7, 2017.

Radical Arab nationalists, the Islamic Movement, and the EU are provoking the Beduin to resist Israel’s benevolent development plans. 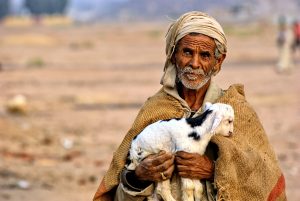 The usual professional anti-Israel activists – rabble-rousing Arab MKs, far-left activists in Israel and from abroad, and some EU officials too – are stirring the Beduin pot to advance an incendiary and false narrative of Israeli dispossession and discrimination.

They are seeking to turn the Beduin issue – a professional planning and social development issue on which Israel is trying to do good – into a nationalist tug-of-war and yet-another-tool to delegitimize Israel.

It was they, in fact, that forced the breakdown in negotiations in January between Israel’s Beduin Development and Settlement Authority and the villagers of Umm Hiran, which led to confrontations and the killing of both a policeman and a local Beduin man.

After a long legal struggle all the way up to the Supreme Court (which they lost), the villagers had mostly agreed on a broad deal with the government for relocation to modern housing. But at the last minute, the radical activists swooped-down on the Negev, and shamed and threatened the village leaders into rejecting the understandings reached with the government.

This is the pattern of radical agitation, rejection and violent struggle that could repeat itself over and over again in the coming years, stymieing Israel’s considerate and responsible plan for boosting the Beduin.

This would be a tragedy, because most Beduin undoubtedly want to work cooperatively with the government in lifting their marginalized communities out of poverty and crime; and because the government must seize the opportunity to husband the lands of the Negev for all Israelis – before it is too late.

The battle is being played out in the E-1 quadrant as well, where Israel plans on demolishing an illegal and provocative Beduin encampment called Khan al-Ahmar, near Maaleh Adumim. The EU has threatened Israel with retaliation if it does so, out of “deep concern” for Palestinian rights in Area C of Judea and Samaria. Of course, the Beduin shanty town is there in order to block Israel’s plans to develop E-1. And the Italians funded a Beduin school there for the same purpose.

Outrageously, the EU has begun to intervene in Beduin Negev matters too, monitoring and protesting Israel’s every move – which is gross and hostile interference in Israel’s internal affairs. Essentially, the EU is conflating the Beduin struggle with that of the Palestinians in the West Bank, advancing a narrative of Israel as a colonial occupier against indigenous and oppressed peoples.

AT LEAST 210,000 Beduin live in Israel’s south, making up 30 percent of the Negev’s population, sprawling uncontrollably and illegally across ever-greater tracts of land in the northern Negev. One-third to one-half the Negev Beduin live in 1,700 “non-recognized” rural settlements where little, if any, municipal services exist, including basic water and sewage infrastructure. There is no municipal planning or taxation.

It’s no surprise that these Beduin communities suffer from extraordinary high rates of unemployment, poverty, criminal activity, violence against women, and Islamic radicalization. The matter is exacerbated due to the high rate of growth of the Beduin community.

In 2013, the government adopted the “Prawer-Begin” plan, based on the recommendations of a committee chaired by former Supreme Court Justice Eliezer Goldberg, and named for a professional team of high-ranking officials headed by Ehud Prawer, and later by MK Benny Begin. Hundreds of meetings with Beduin leaders were part of the consultative process leading to this point.

Under the plan, some 30,000 of the 100,000 Beduin who live in squalid and illegal encampments were to be relocated, and moved to developed lots in nearby farming, suburban or urban communities, with compensation.

But under pressure from the radicals, the Beduin resisted the plan. And right-wing figures accuse Begin of handing thousands of dunams of land to the Beduin as a gift without significant legal source for the Beduin claims.

LAST YEAR, the cabinet adopted Housing Minister Uri Ariel’s revised plan to invest NIS 3 billion over the next five years in upgrading Beduin communities in the Negev. Ten new industrial areas will be established in Beduin areas, NIS 420 million will be invested in improving employment opportunities (including job training programs for Beduin), and NIS 250 will be spent on developing Negev public transportation routes.

Minister Ariel’s approach is to quietly negotiate tribe by tribe and family by family, to encourage the move of Beduin from wretched to honorable towns; from ramshackle to modern villages; from anarchic to organized and legal settlements. He is acting to save both the Beduin and the Negev.

Of course, social engineering is no easy task, even without the interference of professional agitators who are hell-bent on co-opting the Beduin as a tool against the state. Altering the Beduin patriarchal culture and pre-modern mode of desert living, and integrating the Beduin into Israeli society, will take years of careful negotiation and cautious planning.

The question is: Can Ariel make incremental progress without running-up against the intimidators of Balad and the provocateurs of Raed Salah?

Amichai Yogev, southern director of the NGO Regavim, which closely monitors illegal Bedouin building and seeks enforcement of the rule of law, believes that if Israel demonstrates to the Beduin that it is determined to implement its policies, a majority of Beduin leaders will cooperate. This means going through with demolitions when necessary. At first, this might energize the radicals; but in the longer term, it will isolate and marginalize them.

In any case, the Netanyahu government should be praised, not vilified, for advancing comprehensive, judicious (and very expensive!) plans that will both ensure advancement for the Beduin community and preserve Israel’s lands for the broader public.