This week marks the 20th yahrtzeit of the great Tanach teacher, Nehama Leibowitz, with whom I had the privilege of studying for two years. In fact, I was at her very last shiur, the night before she was hospitalized. In her memory, I am re-posting the hesped for her that I published on her first yahrtzeit, in The Jerusalem Post on Sunday, April 5, 1998. 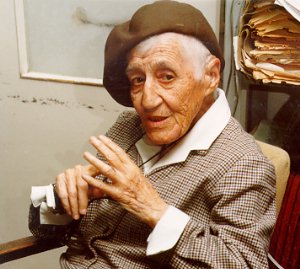 “Servants of time – are the slaves of slaves.

A servant of the Lord – only he is truly free.”

Year after year, as we studied the Ten Commandments together, my revered Bible teacher Prof. Nehama Leibowitz would return to the above poem, penned by the medieval philosopher and payytan Rabbi Yehuda Halevy. Sitting in her worn, tiny living room on hard benches, surrounded by hundreds of books and gilyonot (Nehama’s own famous Bible study sheets) we students secretly would smile at each other. She never realized just how accurately Rabbi Halevy’s words described her own self.

Nehama, who died one year ago this week at age 92 (i.e., in 1997), taught us that fashion – in dress, behavior and speech – meant slavery to time. What’s “in” or “in style” is not important she railed; only that which is timeless is of value. Indeed, Nehama the master teacher was impervious to shifting tides and fads. She wore the same brown suit and hat for decades; refused to consider any material upgrading of the spartan living room furniture which served as her classroom (the benches and chairs had to be set up just so!); upheld and fiercely argued for Biblical standards in morality; and maintained a rigorous schedule of Torah study and teaching. Because Torah is timeless.

Nehama did not put stock in transformatic spiritual experiences nor appreciate emotional highs in religion. The thunder and lightening of revelation at Mt. Sinai, or the fleeting thrill of a rapturous Hassidic dance, ultimately were ineffective, Nehama felt. After all, it didn’t take long before the Jews who experienced Sinai debased themselves in worship of the Golden Calf, she would point out emphatically.

In place of passion and sentimentality, Nehama preferred self-discipline and repetition. Character, she was wont to say, is formed through constant learning and tenacious devotion to good deeds. Religious belief is a function of intellectual sophistication and discovery, and clear thinking. She demanded that of herself, and of her students. And we loved her for it.

There were no half truths in Nehama’s life, nor could she countenance less than full devotion to the cause. For this reason, she was completely impatient with Jewish life in the Diaspora, which she viewed as Jewishly false, dangerous and “thank God, no longer necessary”. When I informed her more than 15 years ago that I was returning to Canada to study (after having studied here in Israel, and with her, for several years), Nehama became apoplectic.

Galut was where assimilation devoured Jews daily, Nehama passionately believed. She answered letters, and marked Bible study sheets sent to her by hundreds of students abroad, mainly out of pity and concern. For Nehama, the Jewish future resided only in the Land of Israel, and ever since the establishment of the State she consistently refused to travel and teach abroad.

In Bible-teaching methodology Nehama was a revolutionary. For her, the entire Tanach (Old Testament) was the source book, even when studying but one chapter. Heaven help the student who would arrive at class without a complete Tanach in hand! She would not consider a Talmudic passage, an excerpt from a Midrash, nor a late twentieth-century commentary without first understanding the textual issue or difficulty that lay at the root. Asking “ma kasheh leRashi?” (what’s Rashi’s difficulty?) – has became, thanks to Nehama, the standard modus operandi in Israeli classrooms. Make the student think, not memorize!

At the core of Nehama’s religious conscience was personal ethics. Her very last lectures in life, in which I had the privilege of participating, were devoted to the studying of morality in thought and action, based on chapters 21-23 in Exodus.

Despite the fact that the Parashat Hashavua advanced weekly, Nehama couldn’t get away from Parashat Mishpatim, as if she knew this was her last time around to expound upon the biblical prohibitions against duplicity, prevarication and the telling of lies, the causing of mental or verbal anguish, and the mistreatment or abuse of neighbors and strangers.

Idols were another one of Nehama’s pet peeves – idols such as money, glamour, technology, even sports. “Polytheism is alive and well in modern society”, she would warn. Idolatrous preachers with sharp tongues parading as holy men frightened her too.

That’s why Moses dashed the first tablets with the Ten Commandments, she explained in her last shiur, the night before entering the hospital, quoting Rabbi Meir Simha of Dvinsk (her very favorite Meshech Hochmah). Holiness resides in human morality directed by God, not in idolatrous devotions to icons of our own making, Moses sought to warn. Similarly, Nehama taught her students critical thinking, integrity and honesty – inspiring us to study more and be better people.

Lengthy eulogies and elaborate words of praise regularly are engraved on the long, sleek tombstones in Jerusalem’s Har Tamir cemetery. But one such, one-year-old, slab of limestone stands out for its simplicity. Three modest words suffice to record the deceased’s powerful life and times: “Nehama Leibowitz, Teacher”.