The capital importance of E-1

Building 50,000 homes on Jerusalem’s eastern edge is critical for the future of the city and for Israel’s security. 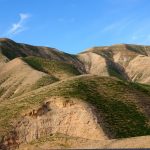 Long before Israeli and American negotiators agree upon “limitations” for settlement activity in Judea and Samaria, Prime Minister Netanyahu should set down markers for “growth” that will solidify Israel’s hold on Jerusalem and the Jordan Valley. This means that Israel should be building 50,000 apartments in the E-1 corridor over the next decade.

Every Israeli Prime Minister since Yitzhak Rabin has planned and promised to build in E-1, for salient reasons: municipal and strategic imperatives that have only grown with time. The E-1 quadrant is absolutely critical for the future of the city, and for Israel’s long-term security.

Let’s start with the municipal.

E-1 begins on the eastern slopes of the Mount of Olives and runs along the road towards Maaleh Adumim. It is the last significant piece of unsettled land in the Jerusalem envelope. It is the only place where tens of thousands of homes can be built in order to overcome Jerusalem’s serious housing shortage.

Jerusalem already abuts Ramallah in the north and Bethlehem in the south. Environmental lobbies have stymied all plans for significant housing projects in the green mountains to the west of the city. So the only direction to grow is eastwards, into E-1.

But the city has been held hostage to global politics. As a result, there has been no significant new building underway in the Jerusalem envelope for more than a decade.

No new neighborhoods have been established in the city since Netanyahu built Har Homa during his first term in the late nineties. The government has shrunk from critically-needed expansions of peripheral, middle class neighborhoods like Ramot, Ramat Shlomo, Pisgat Zeev, Gilo and Armon Hanetziv (all of which are over the stale “Green Line”), because of Obama administration pressures.

Even as such projects are slowly being freed-up now, they won’t amount to anything near the 6,000 new apartments a year that Jerusalem needs just meet the demands of natural growth.

Visitors to the city will notice plenty of luxury skyscrapers and fancy villas being built in central Jerusalem. But this works only for very rich (and mostly foreign) buyers who can afford the downtown area.

Hard-working, upwardly-mobile young families with kids simply have no affordable housing options in Jerusalem. This demographic has been leaving the city, leaving Jerusalem with socio-economically poor populations; mainly, Arab and Haredi residents. This has grim implications for the attachment of Israelis to Jerusalem.

Mayor Nir Barkat has done wonders to bring hi-tech employment and modern culture to the city in order to make Jerusalem a viable option for well-educated young Israelis. But without a gargantuan leap in affordable housing options – and again, that categorically means developing E-1! – Barkat’s efforts may come to naught.

Now for the strategic.

Highway number 1, which runs from Tel Aviv up to Jerusalem and down to the Jordan Valley, is the only west-east axis across the State of Israel with a Jewish population majority. It is the only safe route via which Israel can mobilize troops from the coast to the Jordan Valley in a case of military emergency. It is an essential and decisive military asset.

Israel needs to secure the road from the coast to the valley via an undivided Jerusalem, the E-1 corridor, and the city of Maaleh Adumim. Building in E-1, and expanding Maaleh Adumim eastwards too, are best ways to augment Israel’s long-term hold across this strategic arc.

Some Oslo-era pundits argue that Israel no longer needs the Jordan Valley as a shield against aggression from the east. The conventional military threat to Israel from the east, they note, has diminished – with the end of Saddam Hussein’s regime in Iraq, the weakening of war-torn Syria, and the relative stability of Jordan despite the turmoil in the Arab world.

Yet this is a very short-term perspective, motivated by the desire to convince the Israeli public that the Jordan Valley is dispensable. This perspective ignores the immense potential for escalated political upheaval in the region, including possible Jihadist destabilization of Jordan.

Maj. Gen. (res.) Uzi Dayan, a former head of the IDF Central Command, IDF Deputy Chief of Staff, and National Security Adviser to the Prime Minister, has cogently and clearly laid out the argument for defensible borders that necessarily include the Jordan Valley.

He says that Israeli security requires three things: fundamental strategic depth; room to wage war against the threat of conventional attack from the outside; and room that allows for effectively combating terrorism. The minimal strategic depth and indivisible air space required is the 65 kilometers average width of Israel from the Mediterranean Sea to the Jordan River.

As for room to wage war, that is the Jordan Rift Valley, which ranges between 6 and 14 kilometers wide. The mountains on the valley’s western edge (which range from 900 to 1,400 meters edge high) create a physical defensive barrier that is traversable only through five mountain passes. Thus, even a limited IDF force deployed in the valley should be able defend Israel against an attack from the east.

Furthermore, the Jordan Valley is the eastern buffer zone that prevents the West Bank mountain region from becoming a full-blown terrorist entity.

Some American and Israeli officials argue that Israel can achieve security on its eastern border by the placement of early detection systems in the Jordan Valley and by the deployment in the valley of foreign forces. That was the essence of the plan proposed by US General John R. Allen on behalf of Secretary of State John Kerry. Then Israeli Minister of Defense Lt. Gen. (res.) Moshe Ya’alon dismissed the plan out of hand, and Gen. Dayan concurs.

Dayan says that experience proves that no warning system can replace the defensive space of the Jordan Valley, and that Israel must never rely on foreign forces. Foreign troops will not risk their lives in the war on terror, and they will be the first to flee the region should a crisis develop.

Israeli grand strategist Prof. Efraim Inbar says that Israeli negotiators of the past twenty years have approached security and diplomacy with their heads screwed on backwards.

Israel must move, he says, from a policy of “security based on international agreements and diplomatic guarantees” to a policy of “agreements based on security provided by Israeli forces deployed in defensible spaces.” We have to think of defensible borders, he explains, not only as markers that ensure Israel’s security needs, but as key building blocks which guarantee that peace treaties will be sustainable.

All this leads back to building in E-1, which should be included in the “understandings” that Netanyahu is currently negotiating with the Trump administration.

But the accusation of “bifurcation” is a red herring, as is the demand for territorial contiguity.

It is quite clear that any Israeli-Palestinian arrangement in Judea and Samaria is going to involve blocs and bypasses, overpasses and underpasses, detour roads and shared spaces. There are multiple, creative ways of creating livable contiguity in what will always be a complicated mesh of West Bank populations, Arab and Jewish. E-1 is the least of problems in this regard. So Israel’s plans to build there need not be regarded as a bar to peace with a serious Palestinian partner.

E-1 must be developed to revitalize Jerusalem and secure Israel.