Ari Kahn’s unique biblical commentary is based on the mystical rabbinic premise that the actions of our Biblical forefathers created spiritual patterning that impact on our lives in the present. 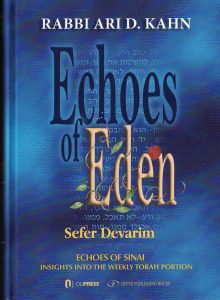 Rabbi Ari D. Kahn’s book series, Echoes of Eden, contains extraordinarily sophisticated essays on the weekly Torah reading. He has now published the fifth and final volume in this series, Sefer Devarim: Echoes of Sinai, just in time for the annual reading in synagogues of Deuteronomy.

A student of Rabbi Joseph B. Soloveitchik, one of the greatest thinkers and yeshiva deans of the twentieth century, Rabbi Kahn today directs foreign student programs and lectures in Jewish studies at Bar-Ilan University. In Echoes of Sinai, as in the previous four volumes of the Echoes of Eden series, the author flies deftly across Biblical texts, through far-apart centuries and divergent scholarly disciplines.

His method rests on plumbing traditional commentaries, alongside mystical glosses and less-well-known kabbalistic commentaries on the Bible, and eliciting over-arching concepts that cross chapter boundaries.

In doing so, he teaches us how the Bible has recurring, emphatic moral themes. His work seems to be based on the mystical rabbinic premise that the actions of our Biblical forefathers created spiritual patterning that impact on our lives in the present.

The series’ title, Echoes of Eden, reflects this method. Kahn finds traces of Eden’s evil snake venom or the serpent’s shed skin in many, if not most, of the Biblical episodes from Genesis through Deuteronomy. Likewise, he finds echoes of the cosmic love and spiritual attraction that trace back to the first union between Adam and Eve – in almost every weekly Torah portion.

Similarly, Kahn describes the ladder of Jacob’s dream in Bet El, Kahn finds dancing angels, whose kinetic movement teaches us how to build a home of Godliness, defeat melancholy, and rebuild Jerusalem. He connects this sulam (ladder) with Sinai (both in the sense of the physical location and the content of the Revelation that occurred there).

The author connects Joseph’s coat of many colors to the atonement of the High Priest in the Temple, to the Biblical prohibition of shaatnez (mixing flax and wool in a garment), and to the tragic sibling stories of Cain and Abel, and Amnon and Tamar, as well as to the almost-adulterous relationship between Joseph and the wife of Potiphar. In each of these cases, Kahn discerns the sacred power of clothing, unleashed or abused.

In his newest volume, on the book of Devarim (Deuteronomy), Kahn connects Og king of the Bashan (Golan) to Abraham’s servant Eliezer; examines the relationship between ritual slaughter and spirituality in the Land of Israel; and considers the connection between trees and people. He deals with dysfunctional relationships in the Bible, Moses’ supernatural leadership in the Sinai desert, Jewish historical consciousness, the shofar and messianism, truth and corruption; strength and joy.

Rabbi Kahn’s unique Biblical commentary is laced with penetrating psychological insights and written in elegant prose. The Echoes of Eden series as a whole, and Echoes of Sinai, the fifth volume in the series, offer layers of interpretation and original insights that both scholars and novices will find enlightening and thought-provoking. The Torah text is quoted in the original Hebrew and translated into modern, understandable English that makes the underlying concepts come to life.

The extensive, often lengthy footnotes allow more advanced students to delve further into the supporting sources and explore other directions not dealt with by the author, making this work an invaluable resource for further study and scholarship. Unfortunately, most of these sources are available only in the original Hebrew and have yet to be translated.

Rabbi Kahn’s essays take study of the Torah up quite a few intellectual notches! Bravo.