Yaakov Amidror, Hillel Frisch, Gershon Hacohen, Efraim Inbar, Eran Lerman and Max Singer discuss Israel’s policies on the Palestinian issue, in a post-Obama and post-Abbas era. The upshot of their debate: Apply Obama’s first rule of governance. “Don’t do stupid things.” It is wiser for Israel to defer action than to take steps that threaten to make a bad situation worse.

Amidror: “This is not the time to embark on useless experiments or risky unilateral initiatives, either in the hope of preparing the ground for an eventual Palestinian state or in the hope of thwarting it. When standing on the edge of a cliff, it is wiser to keep still than to step forward…” 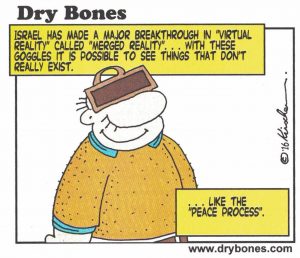 With Barack Obama’s term as president of the US coming to an end, and Mahmoud Abbas’ tenure as Palestinian leader winding down too, the Israeli government will soon have an opportunity to recalibrate its diplomatic policies. Israeli policy on the Palestinian issue has been ham-fistedly frozen for two decades.

But in which direction should Israel go? Fortify or vitiate the Fatah-led dictatorship in Ramallah? Redeploy from parts of the West Bank, or re-assert Israel’s sovereign presence in major parts of Judea and Samaria through renewed building?

Hand the PA greater powers in Area C and allow the European Union to build new Palestinian town-lets all over the place; or intensify development of the Maale Adumim and Ariel settlement blocs, and grow Gush Etzion to half a million residents over the next decade – as Construction and Housing Minister Yoav Galant suggested this week?

Do withdrawals toward the coastal plain offer a saner and safer future for Israel; or is building a united and “greater” Jerusalem from Jericho to Jaffa the DNA that holds the key to the future of Israel and Zionism – as Maj. Gen. (res.) Gershon Hacohen argues?

Muddle through, or attempt a radical paradigm shift?

These questions have been argued out in recent months in the seminar rooms and on the website of the Begin-Sadat Center for Strategic Studies by a sterling set of minds, including General Hacohen, Maj. Gen. (res.) Yaakov Amidror (the Rosshandler senior fellow at the center, and a former national security advisor to the Prime Minister), Col. (res.) Dr. Eran Lerman (a former deputy national security advisor), and professors Hillel Frisch (an Arabist), Efraim Inbar (a strategist), and Max Singer (a defense expert).

The upshot of their debate: Apply Obama’s first rule of governance. “Don’t do stupid things.” It is wiser for Israel to defer action than to take steps that threaten to make a bad situation worse.

Frisch mapped-out five possible Israeli approaches: caretaker conflict management, creative friction, constructive chaos, unilateral withdrawal, and unilateral annexation. The caretaker option is probably the most feasible, he feels; unilateral withdrawal is the least; and no option is ideal. In every case, Israel will have to maintain a significant military presence in Judea and Samaria.

Frisch completely dismisses a sixth option: Rapid establishment of a full-fledged Palestinian state. Neither he nor his colleagues view this as feasible or advisable in the foreseeable future.

Inbar says that “Israelis have gradually come to realize that at present the Palestinians are neither a partner for comprehensive peace nor capable of establishing a viable state, unfortunately. The Palestinian Authority has no intention of accepting a Jewish state in any borders, and the two sides remain far apart on most of the concrete issues to be resolved.”

“Israel’s recent governments are left, willy-nilly, with a de facto conflict-management approach, without foreclosing any options. While there are costs to this wait-and-see approach, let’s remember this was the approach favored by David Ben-Gurion. He believed in buying time to build a stronger state and in hanging on until opponents yield their radical goals or circumstances change for the better.”

Amidror too dislikes the drive for unilateral Israeli initiatives. “A partial withdrawal would likely increase, rather than decrease, Palestinian terrorism, as Palestinians would be motivated to push harder for total Israeli withdrawal. On the other hand, Israeli annexation would inflame Palestinian passions and engender severe opposition to Israel abroad.”

“This is not the time to embark on useless experiments or risky unilateral initiatives, either in the hope of preparing the ground for an eventual Palestinian state or in the hope of thwarting it. When standing on the edge of a cliff, it is wiser to keep still than to step forward,” Amidror concludes.

Lerman agrees, noting that many factors bind both Prime Minister Netanyahu and Opposition Leader Herzog to their current position of genuine but hung support for the two state rubric. This includes the sensitivities of neighbors who matter (Jordan, Egypt, etc.), the views of Diaspora Jewry and of Western diplomatic allies, and defense establishment preferences for the status quo.

But Lerman also warns that the false Palestinian narrative of one-sided victimhood is a major hindrance to all peace efforts. “Global actors that want to help achieve peace need to assist the Palestinians in moving beyond wallowing in self-pity and rituals of bashing Israel,” he says.

“The concept of painful but practical compromises seems alien to the Palestinians, and the international community is not doing its part to help the Palestinians mature towards this realization.”

Along these lines, Singer says that Washington and Brussels robustly must make clear their distaste for Palestinian denial of the Jewish People’s connection to the land of Israel and Jerusalem. They should modify their aid programs to reduce Palestinian use of foreign money to support terror; determinedly defend free speech in Palestinian society; and act to resettle Palestinian refugees outside of Israel.

Singer also feels that Israel should improve its public diplomacy “by moving from appeasement to truth-telling.” Specifically, Israel should formally adopt the Edmond Levy report to challenge the myth that Israel has stolen Palestinian land. “Even opponents of Israeli settlements in the West Bank and supporters of a two state solution should support Levy’s affirmation of Israel’s historic and settlement rights in the territories. This is critical in leveling the diplomatic playing field. Israel must not go into future negotiations as a guilty party.”

General Hacohen goes beyond his BESA Center colleagues. To him, caretaking and truth-telling are insufficient. He believes in Israeli activism that forces the adversary onto the defensive and creates advantageous new situations. This means maneuvering and expanding in Jerusalem and the Judean/Samarian heartland. “Settlements are forward outposts of Zionism, in addition to their being critical to Israel’s military deployment in the territories. Where there is a farmer on his land,” he says, “the army has the strength to rule.”