Should ISIS be wiped out?

The Iranians watch with amusement as Israeli and American experts debate Western strategic options in fighting the radical Islamists. 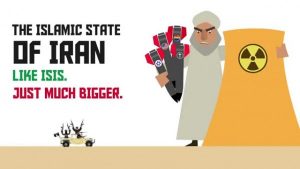 The most conservative Iranian newspaper, Kayhan, which is considered the mouthpiece of Supreme Leader Ayatollah Ali Khamenei, yesterday led with a most unusual front page headline. “A Zionist think tank leader says Islamic State is useful in the battle against Iran. Don’t demolish ISIS!”

The rare Iranian headline correctly referred to a controversial article published earlier this week by the respected director of the Begin-Sadat Center for Strategic Studies, Prof. Efraim Inbar. Inbar indeed argued that the West should not seek the destruction of the Islamic State (IS, ISIS or Daesh); only the weakening of ISIS.

A weak but functioning ISIS, Inbar argued, is actually useful. (He termed ISIS a “useful idiot” organization). Inbar feels that the continued existence of ISIS can undermine the appeal of the caliphate among radical Muslims; keep bad actors focused on one another rather than on Western targets; and hamper Iran’s quest for regional hegemony.

It’s no wonder, then, that Hossein Shariatmadari, the well-known editor-in-chief of Kayhan – whose actual title is “representative of the Supreme Leader” – decided to highlight Inbar’s article above the fold on page one. After all, both Israel and IS are Iran’s mortal enemies. Casting aspersions on both at the same time is an opportunity too good to pass up. In fact, Inbar’s “defense of ISIS” is “proof that the terrorist infidels (i.e., ISIS) represent the Zionists and America in their battle against Iran,” editorialized Kayhan.

Of course, Inbar wasn’t seeking to defend ISIS at all, but rather was pointing to the fact that the Obama administration has inflated the threat from ISIS in order to legitimize Iran as a “responsible actor” that will, supposedly, fight ISIS in the Middle East. This was part of the Obama administration’s rationale for its rotten nuclear deal with Iran.

Inbar argued, admittedly counter-intuitively, that a weakened but lingering ISIS would help undermine Tehran’s ambitious plan for domination of the Middle East; while a complete defeat of ISIS will only enhance Iranian hegemony, buttress Russia’s role in the region, and prolong Assad’s tyranny.

Inbar: “A dysfunctional and embattled ISIS is more conducive to the disillusionment of Muslim adherents of a caliphate in our times than an ISIS destroyed by a mighty America-led coalition. The latter scenario perfectly fits the narrative of continuous and perfidious efforts on the part of the West to destroy Islam, which feeds radical Muslim hatred for everything the West stands for.”

The West yearns for stability, and holds out a naive hope that military defeat of ISIS will be instrumental in reaching that goal, wrote Inbar. “But stability is not a value in and of itself. It is desirable only if it serves our interests. And the continuing existence of ISIS serves Western strategic purposes.”

The reactions to Inbar’s article came fast – as befits a place of intellectual ferment and policy creativity like the BESA Center. Inbar’s colleague, Col. (res.) Dr. Eran Lerman (a senior research associate at the center and a former deputy director of Israel’s National Security Council), published a counter-article on the center website declaring that the continued existence of ISIS fortifies, rather than enervates, Iran’s quest for hegemony. “The destruction of IS should be the first stage in a campaign designed ultimately to isolate and contain Iran,” he wrote.

Lerman admitted that Inbar’s hard-knuckled, realist point of view reflects the anguish felt by many in Israel and across the region as they watch the US administration and others get their priorities wrong, by defining Iran as an asset and a potential ally in the war against the so-called caliphate.

“Even so, a strategy that leaves ISIS bruised but alive would pose serious dangers. The norm that terror cannot be tolerated is a precious one…and the coordinated Western campaign against ISIS is a development Israelis and others should welcome, not disparage. Moreover, the total defeat of ISIS on the battlefield likely would lead to the collapse of the ideas for which ISIS stands. Furthermore, the continued existence of ISIS and its horrors is a gift to Ayatollah Khamenei. He uses it to lure Turkey, blame the Saudis, and justify the ravages inflicted on Sunnis in Iraq and Syria by Iran’s proxies.”

Lerman similarly rejected President Obama’s raw, realist attempt to portray Iran and ISIS as balancing rivals. The Western and Sunni “camp of stability,” he says, must craft a strategy that sees all Islamists – Iran, ISIS, and the Ikhwan (Moslem Brotherhood) – as enemies. “Together, these partners should outline a phased campaign that begins with the destruction of ISIS, moves on to the marginalization of the Moslem Brotherhood, and ultimately isolates the Iranian regime and takes back the gains it made in the name of fighting ISIS.”

Paraphrasing the Roman senator Cato, Lerman concluded his article thus: Raqaa Delenda Est, i.e., the capital of the ISIS state needs to be taken and the organization destroyed.

Inbar was similarly challenged by another colleague, Prof. Steven David of Johns Hopkins University (a member of the International Academic Advisory Board of the Begin-Sadat Center). “Defeating ISIS and the horror it perpetuates requires nothing less than the elimination of its caliphate. Through control of territory, ISIS is able to inspire and train recruits, to direct terrorist attacks, and to demonstrate the West’s inability to eradicate a pressing threat,” Prof. David wrote.

“In the heart of the Middle East, ISIS thumbs its nose at the world, killing hundreds of innocents while destabilizing a critical region. What does this say about the West’s ability to protect its own? With each terrorist outrage and triumphant claim of responsibility from ISIS, the West’s credibility shrinks. If a collection of the world’s most powerful states cannot eliminate an ongoing threat to its interests perpetuated by maybe 30,000 fanatics armed with little more than pick-up trucks, the ability of the West to ensure the security of its own countries – to say nothing of creating a liberal world order – is called into question.”

Inbar is standing his ground. To Dr. Lerman’s argument that ISIS excuses Iran’s drive for regional hegemony, Inbar points out that Iran doesn’t need this excuse. To Prof. David’s argument that the success of ISIS exposes Western weakness, Inbar responds that Western weakness is much more manifest through Obama’s capitulation to Rouhani, Assad and Vladimir Putin than it is to Abu Bakr al-Baghdadi of ISIS. The threat to the West of Iranian nuclear weapons and Iranian Mideast hegemony (and of Russian revanchism in Europe) is far greater than the terrorist nuisance of ISIS.

And to the argument that destruction of Baghdadi’s caliphate will cap terrorism, Inbar retorts that Islamic insurgents already are deeply embedded in dozens of countries around the world, with Shiite (Iranian/Hezbollah) and other Sunni networks to serve them.

What can we say? The only certain thing is that Ayatollah Khamenei is watching this quintessentially Western open debate with amusement.