Published in The Jerusalem Post and Israel Hayom, June 3, 2016.

EU brawling on behalf of the Palestinians has reached extreme heights of hutzpah. Every Monday and Thursday the EU has taken to shelling-out threats to downgrade diplomatic and economic ties with Israel, unless Israel does this or desists from doing that. And boycotts of Israeli products no longer satisfy the bullies of Brussels. Ramping-up their confrontation with Israel, they have gone into the business of establishing “settlements” for the Bedouin and Palestinians in Judea and Samaria, tower and stockade style. Dictating impatiently to Israel also is in vogue, as in today’s Paris confab. Prime Minister and Foreign Minister Netanyahu should repulse the escalating European intimidation. 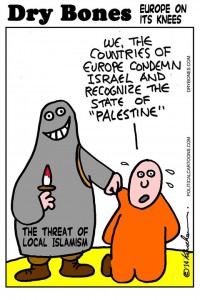 The European Union is on the rampage. Every Monday and Thursday it has taken to shelling-out threats to downgrade diplomatic and economic ties with Israel, unless Israel does this or desists from doing that.

This week the EU hit Israel with a double whammy. First, it fiercely warned the Coordinator of Government Activities in the Territories (COGAT) that Israel’s policy of demolishing illegal and unauthorized Palestinian construction is harming ties between Israel and the 28-member EU countries.

This includes the wild Bedouin building spurt that the EU has insolently funded in the strategic E-1 quadrant between Jerusalem and Maale Adumim, in entirely purposeful defiance of Israel.

And today in Paris, EU foreign ministers led by France intend to promulgate “parameters” for a solution of the Palestinian-Israeli conflict, which will again likely move the international markers in directions favorable to the Palestinians, while threatening Israel with deadlines for compliance.

THE BRAZEN EU intervention in E-1 has reached extreme heights of hutzpah.

The IDF defines the area in question a pivotal part of Israel’s strategic depth, and essential to “defensible borders” for Israel. It is also Area C under the Oslo Accords, which means that Israel holds exclusive civilian and military control.

Civil Administration data, recently presented to the Knesset’s subcommittee on Judea and Samaria, shows that 6,500 Palestinians currently live in some 1,220 illegally-built homes in the area, and that this number is growing weekly.

Enter the imperious EU. Boycotts of Israeli products no longer satisfy the bullies of Brussels. Ramping-up their confrontation with Israel, they have gone into the business of establishing “settlements” for the Bedouin and Palestinians in this area, tower and stockade style.

The EU has poured perhaps 100 million Euros into EU-emblazoned prefabs, EU-signed roads, and water and energy installations – in E-1, in Gush Etzion (near Tekoa), in the southern Hebron hills, and even in the Negev.

Under the cover of diplomatic immunity, the EU’s settlement-building bosses audaciously thumb their noses at COGAT inspectors, then scream bloody murder when the IDF moves in, ever so minimally (– far too meekly and infrequently, I think!) to knock back a few of the most provocatively- and problematically-positioned EU illegal outposts.

Note that every Israeli prime minister since Yitzhak Rabin has promised and intended to build in the E-1 quadrant as the eastern strategic anchor for Jerusalem and its critical connection to the Jordan Valley; only to be stymied by international protests.

In short, the EU’s support of the Palestinians has subversively graduated from passive diplomatic and financial assistance to seditious participation in the Palestinian Authority’s illegal construction ventures. The explicit intent is to erode Israeli control of Areas C and eastern Jerusalem while promoting Palestinian territorial continuity.

The EU even has extended its deep concern for Arab land rights, and outrageous interference in Israeli planning matters, to the Negev and Galilee, as detailed in the shocking 2014 book Catch the Jew! by German-Israeli author Tuvia Tanenbom.

The writer captured ugly scents of ardent anti-Semitism and furious opposition to any Zionist presence in Palestine in his interviews of EU and European NGO officials who are enabling the Palestinian, Bedouin and Israeli Arab land wars against Israel.

(The book is required reading, in Hebrew or English. But brace yourself: It unveils a violent, wicked world of official Israel-bashers).

AS FOR TODAY’S Paris peace conference: The old cornerstones of peace diplomacy are out the window. “Not prejudging the outcome of negotiations,” and “direct negotiations between the parties without coercion” – are principles that no longer hold sway. Dictating impatiently to Israel is in vogue.

Remember that the Palestinians rejected offers three times recently (2000, 2001, and 2008) which would have given them statehood, including possession of almost all of the West Bank and a share of Jerusalem. They also fled from US Secretary of State John Kerry’s talks in 2014.

They are thrilled with the Paris confab because it diverts attention from their intransigence and heightens Israel’s diplomatic isolation without actually brokering a peace negotiation that they don’t want.

But none of this relevant experience bothers the EU. It’s just happy to gang-up on Israel yet again, and push Israel towards essentially-unilateral withdrawals – without any real expectations of moderation from the Palestinians.

Perhaps that is because the EU has been the PA’s bighearted sugar-daddy; the deepest honey-pot the Palestinians could ever hope for. And as Shareholder Number One in the PA, the EU is finding it hard to accept that there is little Palestinian maturity or good governance to show for all that investment.

And thus, in the warped weltanschauung of the European Union, it is logical to brawl for the Palestinians and browbeat Israel.