On Pesach, peoplehood and pursuit of the enemy

Israelis posses the sense of righteousness, purpose and resolve so desperately needed by the West. Seder night rituals reinforce this. Fighting off global Islamic jihadist attacks will similarly require a renewal of Western resolve that can only come from profound intellectual and moral rearmament. 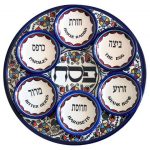 According to an in-depth survey published last week in Israel Hayom, Israeli youth believe deeply and optimistically in the future of this country.

85% of Israeli kids in grades 11 and 12 love the country. 89% plan to stay here, no matter what. 85% think that the IDF is the most moral army in the world. 65% say it would be worthy to die for country, if necessary. 63% feel that social solidarity, volunteerism, and family values are what make Israel great.

The deep patriotism expressed in this poll is not to be taken for granted. It is even more impressive given the fact that 82% of the high schoolers think the chances for peace with the Palestinians are minimal to nil. And yet, there is no despair.

Our youth know that Israel is more than the sum total of conflict with the Palestinians (or with Iran), and apparently believe that Israel will manage and even prosper.

I believe that this buoyancy stems, at least in part, from religious faith and identity. My sense is that just about everybody in this country feels part of a grand meta-historic journey; a journey based on a shared narrative and a moral heritage that has sustained the Jewish People for thousands of years and returned it to the Land of Israel.

Of course, not everybody in the country is “religious” in terms of the traditional practice of Judaism. Far from it. But the majority of Israelis feel that there is some Guiding Hand behind the modern renaissance of Jewish life and peoplehood.

Isn’t that why we all participate in the Passover seder; because it encapsulates our faith in Jewish history and destiny? Isn’t that what the State of Israel’s founders meant when they wrote in the Declaration of Independence, “With faith in the Rock of Israel…’?”

Israeli society is indeed undergirded by a “civil religion” – a latent faith that buttresses public and political life. It is what Rabbi Dr. Jonathan Sacks (the most prolific Jewish philosopher of our day) calls a public theology; a sense of national purpose and identity that is shared by almost all Israelis.

This is not empty convention. Regardless of how or whether they adhere to religious ritual, Israelis understand themselves as holding a moral bond, and as being chosen – yes, chosen! – for a task. They feel a responsibility for advancing Jewish civilization, which the Bible roots in building an exceptional polity in Zion. And thus, Israelis will fight unflaggingly for their freedom.

Moreover, the Jewish People aspires to be an instrument for broadcasting essential values to the world. Among other, this explains why Israelis are among the first to fly across the world to provide assistance in times of natural disaster; why they are so proud of their global medical and scientific contributions; and why scholarly academic collaborations are essential to their soul.

POSSESSING A SENSE of purpose always has been central to community and nation building, in any society. It provides direction and ensures resilience.

American political discourse also has sought to place redemption, liberty, morality and Divine covenant – themes explicitly drawn from the Exodus story – at the center of public life. From the Pilgrim Fathers to George W. Bush, the leaders of America have pledged themselves to creating a body politic inspired by the example of biblical Israel.

Furthermore, they possessed an abiding belief in the essential goodness and uniqueness of America; what’s known as conviction in American “exceptionalism.” They all shared the sense that something great, even miraculous, was at work in America; and this informed an American right and responsibility to lead the world.

From day one, Obama has not been comfortable with American leadership in world affairs. He explicitly views America’s past to be arrogant and high-handed. During his first campaign, he called America “overbearing.”

Obama thinks that he will be leaving the world a better place by cutting unexceptional America (and unremarkable Israel) down to size.

Remember Obama’s prickly press conference in Turkey after the radical Islamic terrorist attacks in Paris? He couldn’t get truly angry at the terrorists, or articulate a defiant response. “I’m not interested in pursuing some notion of American leadership or America winning,” Obama snarled. “I don’t take actions that are, in the abstract, going to make America look tough, or make me look tough.” He went on to grouse that “the attackers in Paris had nothing to do with Islam.”

Therein lies the rub. For Obama, “getting tough” on radical Islam runs up against his jaundiced view of Western civilization and rose-colored view of Islamic civilization. For Obama (and many of his flaccid European colleagues) the West may not deserve to win. Such intellectual moulder is what cobbles the West’s ability to confront modern Islamofascism.

ALAS, FIGHTING OFF Islamic jihadist attacks will require much more than a broad Western intelligence coalition. It will require “getting tough” – meaning a renewal of Western resolve that can only come from profound intellectual and moral rearmament.

It necessitates a re-grounding in core values and identity commitments that stem from the Biblical traditions, and a renewed sense of righteousness and societal purpose. It’s also a war that cannot be won when leaders are afraid to identify the enemy.

It’s no accident that the core Haggada text of the Passover seder speaks directly to these civilizational necessities. It grounds Jewish peoplehood in grand values, and anchors Jewish history in Divine providence. It then explicitly acknowledges the enemy (“In every generation they rise up to destroy us…”); recommits to fighting that enemy with G-d’s help (“pour out thy wrath…”); and tasks Israel with shaping an idealized future (“rebuild the Temple and Jerusalem”).

Let us pray that wayward America, too, can rediscover a sense of righteousness, purpose and grit. Pray that beginning next year America will set-out to re-conquer the high moral and strategic ground it has lost to corrosive internal ideologies and truly treacherous external enemies.