Cynical and hysterical hand-wringing about a BDS “threat” lends undeserved profile to a movement that thrives on such attention. 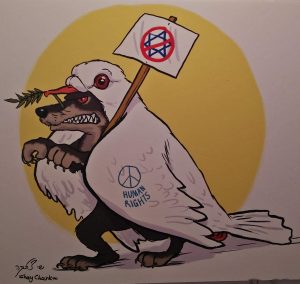 Along with too-many thousands of other Israelis, yesterday I attended Yediot Ahronot’s much hyped mega-conference in Jerusalem on “fighting BDS.” I returned from the conference more concerned about the hype than the threat of boycott against Israel.

Yediot has been riding the boycott “threat” for more than a year, with intensive, sometimes obsessive, coverage of the BDS phenomenon worldwide, and a broad, pithy selection of commentary on how to tackle the “existential threat” to Israel.

The reasons for Yediot’s laser-like focus on the BDS issue are clear. Firstly, it sells newspapers; a lot of newspapers. Israelis are interested in, and duly concerned about, BDS attacks on Israel and Zionism. BDS is good business for Yediot.

Secondly, Yediot’s take on the BDS phenomena is heavily colored by the paper’s anti-Netanyahu agenda.

Many of the speakers at the conference yesterday bemoaned the Netanyahu’s government’s purported “pro-settlement” and supposed “anti-peace” policies, pointing to them as a key spur to the BDS movement. If only Israel were to cut a two-state deal with the Palestinians, the wind would be taken out of the sails of the movement!

Several foreign envoys who spoke at the conference made this argument explicitly too.

How politically convenient for Yediot.

The truth is that each for their own and opposite reasons, the Israeli political Left and the Right are deliberately inflating the threat to Israel from BDS – boycott, divestment and sanctions.

In fact, the “threat” of a global boycott against Israel is so obsessively being talked about these days that you would think it a greater threat than, say, the danger of the Obama administration’s capitulation to Iran on the nuclear issue, or the Hezbollah-ISIS confrontation brewing on Israel’s northern border.

There are many reasons why the nightmare scenarios of BDS are inaccurate, ranging from the weakness of the Arab world, the declining clout of Europe, the resilience of Israel’s reputation amongst democratic elites in North America, to the robustness Israel’s structural ties to Western and Eastern technology and business hubs.

In short, BDS is a problem but it remains a mosquito size movement, while Israel is a scientific, academic, business and cultural juggernaut. Consequently, the specter of Israel’s sequestration and boycott by the world is overblown.

So what is going on here? Why are the Israeli political and media sectors suddenly so seized by panic over BDS? Why are influential public sector actors like Yediot Ahronot feeding the monster, and creating self-fulfilling prophesies about Israel’s “isolation”?

The unfortunate answer, I say again, is that the menace of BDS is being cynically inflated for political purposes.

The Left is narcissistically over-stating the boycott threat because it’s a useful tool to press the urgency of its beloved two-state solution.

Having utterly failed to convince the Israeli public that establishment of a Palestinian state is a good idea that will bring peace and security to Israel, the Left is left with frightening Israelis into withdrawal nevertheless. Israelis must dump Netanyahu and support the Zionist Union’s unilateral withdrawal proposals forthwith; otherwise Israel will lose some benefit or another.

Unfortunately, this has been the modus operandi of the Israeli Left for some years now: Create a bogeyman with which to scare the Israeli public into pulling-out of Judea and Samaria.

As for similar warnings of “isolation” from US President Barack Obama and Secretary of State John Kerry – well, they are principally parroting a line contrived in Israel. They just echo and embellish what they are hearing from their Israeli leftist friends.

In parallel, politicians on the Israeli Right have at times reverted to such scare tactics as well. They and some right-wing activists in the world Jewish community increasingly seem happy to shrei (cry) “gevalt, boycott!” because it provides evidence that anti-Semites who want to dismantle Israel are everywhere – as the Right always has warned. They are elevating BDS from nuisance to existential threat in order to circle the wagons and rally the troops.

Alas, high-level and hysterical Israeli hand-wringing about the centrality of a BDS threat lends undeserved credibility and profile to the movement; provides it with the oxygen on which the movement thrives.

Instead, BDS should be calmly countered on the basis of quiet, creative and concrete initiatives that do not give the other side additional oxygen, and that allow the pro-Israel community to softly overwhelm BDS activity. (See for example the Canadian Jewish community’s seven-year-old and very effective “BUYcott” initiative, which quietly crushes BDS efforts).

Israeli politicians and editors need to conduct themselves with a little more circumspection and lower tones when confronting the BDS phenomenon. BDS is a problem that can be contained. It is not a “great struggle,” nor a “war,” nor an “existential threat” – all hyperbolic terms that were rashly thrown around this week.

Moreover, the BDS problem shouldn’t be aggrandized or manipulated for narrow political advantage. Israel should be able to make its diplomatic-security decisions free of false threats and without having to mollify feverish forecasters.

In this regard, I want to salute the plans underway in Gilad Erdan’s new Ministry of Strategic Affairs and Public Diplomacy, as outlined this week by Erdan and his ministry director general Brig. Gen. (res.) Sima Vaknin-Gill.

Erdan and Gill intend not to climb the ramparts blowing horns and yelping boycott. Nor do they intend to replace the absolutely central role played by Israel’s diplomatic representatives and Jewish organizations abroad in combating BDS.

Instead, the new ministry intends to lead an intelligence-led, almost-undercover effort to expose the nefarious actors and funders who come from the hardest anti-Israel and anti-Semitic dark corners of the world and who stand behind much BDS activity. This has the potential to name-and-shame much BDS backing into retreat. It’s a smart approach.

Former cabinet secretary Zvi Hauser even suggested that several thousand IDF soldiers be tasked to this effort. He monikered this as “Unit 8300” – a sort of parallel to the army’s famous 8200 signals intelligence unit. It’s a worthy idea.