Obama in concert with Islam

Published in The Jerusalem Post and Israel Hayom, December 11, 2015.

Excuse me if this seems conspiratorial, but I sense that Barack Hussein Obama holds a deep-seated ideological belief that Islam has a rightful leadership place in the world, and he is in fact midwifing a resurgence of Islamic influence. What animates the President is a devotion to the honor of Islamic civilization; not (merely) a fear of Mideast quicksand, a distaste for American overreach, or the search for some new grand Kissingerian geopolitical architecture. 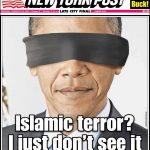 Many times in these pages we have sought to plumb the depth of US President Barack Obama’s mind. Is he plain timid or utterly calculating in global affairs?

What explains his passion to embrace the radical mullahs of Teheran with a softy nuclear deal, despite the fact that all America’s traditional allies in the region are calling for him to check Iran’s advances? Does he not understand that President Putin of Russia is making mincemeat and a mockery of the US-inspired postwar stability? Why his dispassionate, almost uncaring, attitude to the savagery and threat of ISIS?

Many American analysts have concluded that the roots of Obama’s approach rest in the fairly widespread, quintessentially liberal convictions that America has been sinful and diplomatically domineering for decades, and must atone for its arrogance through retrenchment and accommodation. Obama, they say, shares the progressive aversion to the use of American power.

Thus, US Cold War culpability – in Iraq, Iran, Afghanistan, Africa, South America and Cuba – is a burden on America that must be addressed by shrinking America’s global footprint, and allowing indigenous, revolutionary movements to legitimately emerge and stabilize; and that includes Iran and Russia. In short, Obama believes that he will be leaving the world a better place by cutting America down to size.

Yet none of this explains the depth of commitment to a deal with Iran that Obama evinced since his first day in office, nor does it explain his complete insouciance in the face of the escalating Islamic terrorist threat.

ENTERING THIS debate with a new and provocative theory is the incisive Michael Doran of the Hudson Institute.

Doran argues (in a comprehensive essay published this month in Mosaic Magazine) that Obama’s deferential approach to Iran and Russia stems not from absentmindedness or weakness, but from a cohesive (albeit concealed) vision of global order. Obama intends to bring about a new world concert of powers; a coalition that will replace the old balance of power that rested on American military might.

Doran says that Obama seeks a club of nations that, united in their enmity to Sunni Islamic radicalism (but not so much to Shiite radicalism), would work together to stabilize the region by self-consciously maintaining a balance of power among themselves.

The Russian reset and the Iranian nuclear negotiations, he says, were Obama’s way of taking a step back and inviting the Russians and Iranians to buy into the envisioned concert system. The situation in Syria, in particular, has offered an opportunity to showcase Obama’s respect for Russian and Iranian interests.

And why hasn’t Obama ever described his vision openly? Well, Americans and America’s traditional allies in the Middle East deeply distrust both Russia and Iran. So best to proceed step by step, justifying each new step as an ad-hoc response to immediate developments, while keeping his eye (Obama’s) firmly fixed on the goal.

In the meantime, Obama is exercising “strategic patience” (the president’s term). So there’s no need to get overly worked-up about a bombing or two in Paris or San Bernardino. There is no need to go beyond America’s Potemkin train-and-equip initiative in Syria (which was meant only to create the illusion that Washington was acting force out Assad).

After all, Obama seeks not to counter the Russians and Iranians, but to accommodate them. He very consciously designs to make Russia and Iran arbiters in the region.

I doubt that even Obama truly believes that by giving Ayatollah Khameini comprehensive sanctions relief and renewed international legitimacy the Islamic Republic will stop being the expansionist and aggressive Islamic Republic. Or that by coordinating on Iran, ISIS and Syria with Russia, Vladimir Putin will become an apostle of Quietist cooperation with the West.

How can anybody think that substantial moderation of Iranian and Russian diplomatic and military behavior can be bought with American pottage?

The opposite dynamic is readily apparent: Putin’s play in Syria has only harmed American interests. Iran’s release from sanction shackles (expected next week) is only emboldening the mullahs to act against American global interests globally (– or what used to be considered, pre-Obama, core American interests).

In a response to Doran, also published in Mosaic, former Mideast peace negotiator Dennis Ross rejects the conspiratorial tone of Doran’s essay. Instead of there being a grand strategic plan that Obama has hid from the American public, Ross would have us believe that Obama is just being really cautious.

Obama just doesn’t want to repeat America’s mistakes in Iraq, Ross says. He doesn’t want to get sucked into the Syrian quagmire or into a shooting war with Iran over nuclear weapons. Obama actually believes that the P5+1 agreement with Iran will contain Iran’s nuclear ambitions for a decade or longer.

Ross’ gloss on Obama is equally unsatisfying, in my view. It doesn’t elucidate Obama’s zeal for a deal with Iran going back to his pre-presidency days, nor his bland response to Russian aggression. It doesn’t explain Obama’s refusal to acknowledge the Manichean and irreconcilable nature of the challenge posed to the West by radical Islam.

It doesn’t account for the fact that Obama seems more riled by Islamophobia than Islamofasicm.

THIS LEADS ME to suspect that, deep down, ardor for Islam and sympathy for Islamic ambitions of global leadership is what fuels Obama’s approach. Excuse me if this seems conspiratorial, but I sense that Barack Hussein Obama holds a deep-seated ideological belief that Islam has a rightful leadership place in the world, and he is acting to ensure that Islam regains such standing.

It’s not (merely) a fear of Mideast quicksand, nor a distaste for American overreach, nor the search for some new grand Kissingerian geopolitical architecture that animates the President. It’s a devotion to the honor of Islamic civilization.

Consider the fact that Obama’s inaugural address abroad was “A New Beginning,” delivered in Cairo in 2009 – a contrite appeal to the Moslem world for forgiveness and for partnership. Go back and listen as Obama waxes eloquent about “hearing the call of the azaan” as a youth in Indonesia, and about the historical achievements of Islamic civilization in algebra and architecture. This is Obama speaking from the recesses of his soul.

Consider Obama’s refusal to even mutter the words “Islamic extremism” or “jihadism,” and to connect terrorism to Islam. I think that this is because Obama doesn’t believe that Western (or Judeo-Christian) civilization is any better than Islamic civilization, and thus he refuses to tar Islam with terrorism.

Speaking to the National Prayer breakfast in Washington on February 5, Obama said: “Before we get on our high horse and think this [ISIS beheadings, sex slavery, crucifixion, roasting of humans, etc.] is unique to some other place, remember that during the Crusades and the Inquisition, people committed terrible deeds in the name of Christ.”

This is tantamount to saying that the West is rooted in immorality, and that it is time for other, no less moral and possibly more moral, powers to emerge – specifically, Islamic powers. It is equivalent to saying that the denouement of America and rise of an Islamic superpower will elevate world politics to a better sphere.

It is like saying that America sanctions a seismic shift in the global balance of power in favor of Islam.

PrevPreviousIndigenous in Jerusalem
NextA crystal ball on 2016Next