Return of the yellow star

Published in The Jerusalem Post and Israel Hayom, November 13, 2015.

Old habits die hard. Europeans are actually quite experienced at banning Jews from schools and universities, depriving Jews of scholarships, boycotting their businesses, restricting Jews to specific pales of settlement, and placing yellow stars on their arms. Now they are going place yellow labels on Israeli “settlement” products… 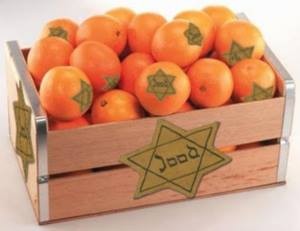 Don’t you love that evenhanded, judicious European Union? Always at the forefront of the push for Mideast peace!

The European Union is oh-so-concerned about the sources of violence and political stalemate in the region. Mind you, not the wave of Palestinian stabbing attacks against Israeli men, women and children (by hate-incited Palestinian children). The EU is much more disturbed by malevolent threats to peace like Jewish families and factories in Judea and Samaria.

Consider: At the moment, women and children are being raped and sold as slaves en masse in Iraq and Syria, and Christians are being driven out or slaughtered with abandon in both these locations.

But don’t worry, “Christian” Europe has its priorities straight. It is urgently tackling those dangerous Israeli settlers raising their children and developing their businesses Judea, Samaria, Jerusalem and the Golan Heights.

Hezbollah, Iran and Russia have backed Bashar Assad’s forces of butchery in a war in Syria that has killed more than 250,000 people and created many millions of refugees. The atrocities abound.

Nevertheless, the European Union is not sure that Hezbollah is a terrorist group, and it is rushing to re-embrace Iran through mega-trade deals. There are no hints of EU product labeling or boycotts when it comes to mullah-manufactured Persian products.

Instead, the fearless EU is taking on those provocative Israeli settlements, which pose such a significant threat to peace and stability in the Mideast.

Federica Mogherini, High Representative of the EU for Foreign Affairs, is delicately tongue-tied about the massive repression of human rights in Iran and sharp uptick in death sentences carried out in Teheran over the past year (– all this on the watch of her smiling Iranian buddies Hassan Rouhani and Jazad Zarif).

She has expressed only mild concern about the fate of American and European journalists and businessmen held without trial in Iranian torture chambers.

She has been perplexed into silence by early Iranian violations (in missile testing and production) of the just-signed P5+1 accord; and by Supreme Leader Ali Khameini’s strident statements walking back key elements of the nuclear deal. (I think she hiccupped a bit and daintily press-released some unease on the matter last week).

She also has had little to say about the rapacious incitement to murder of Israelis coming from Palestinian leadership in recent months.

But have no fear, Mogherini is truly hard at work where it counts: Wrestling with those dastardly Israeli settlements and their products. These communities need to be loudly labeled, isolated, delegitimized, boycotted, bankrupted, and ultimately razed.

The Kurds – one of the oldest ethnic groups in the world, and a key Western ally in the fight against ISIS – don’t have a state. Neither do the Tamils of Sri Lanka, the Uighurs and Tibetans of China, the Basques of Spain, the Chechens of Russia, or the Flemish of Belgium.

However, thanks in part to the pressures of the sagacious EU, the Palestinians already have two states: A radical Islamic state in Gaza established by force against Israel’s will, and an authoritarian state-on-paper in the West Bank recognized by the EU and the UN against Israel’s will. Both Palestinian states are more interested in tearing Israel down than in building a decent political culture of their own.

The EU continues to pour oodles of money into an economically and politically corrupt Palestinian Authority – well over $10 billion since Oslo, aside from funds contributed separately by individual EU countries and additional support for UNRWA.

This includes training and equipment for the PA’s thuggish mini-armies, salaries for more than 50,000 PA bureaucrats, antenna towers and studios for murderer-martyr-glorifying Palestinian TV stations, and tens of millions of euros for the families of convicted Palestinian terrorists, funneled through the PA budget.

But don’t worry. The EU is determined to put a stop to all fonts of radicalism – like EU scholarships for Hebrew University students who live in Efrat or Maale Adumim. After all, these students and their professors (who might also, G-d forbid, live in the “occupied” Jewish Quarter of the Old City of Jerusalem), are the real threats to peace in the region.

The EU is obviously pleased with the long distance (sic.) towards moderation that the Palestinian Authority has travelled over the past 20 years. (Oops, it hasn’t!) Europe is much less royally pleased with the distance traveled by Israeli governments, even though Israel has moved from rejecting Palestinian statehood to begging for it and offering to cede most of the West Bank and all of Gaza.

But in the warped weltanschauung of the European Union it is nevertheless logical to pressure Israel and coddle the Palestinians. Everyone understands that the labeling of settlement products is only the first step towards an overall boycott of Israel and Israelis. It is a giant step forward in the delegitmization of Israel.

In fact, Europe is so certain about what Israel’s borders ought to be that it is going to ram its view down the Jewish People’s throat via boycott and discrimination. Europe simply knows what’s best for the Jews and the Middle East, and it’s going to insist on it.

It seems that old habits die hard. Europeans have a knack for judging and moving Jews. They’re actually quite experienced at banning Jews from schools and universities, depriving Jews of scholarships, boycotting their businesses, restricting Jews to specific pales of settlement, and placing yellow stars on their arms.

Now they are going place yellow labels on Israeli products. They might as well shape the labels as Stars of David!

The EU should be under no illusions. No-one in Israel buys the mealy-mouthed explanations of EU Ambassador to Israel Lars Faaborg-Andersen that this week’s labeling decision is only “technical” in nature. Israelis know exactly what playbook the EU is working from; a playbook written in Fascist Germany of the 1930s, and pushed by the Mufti-adoring anti-Semites in today’s Palestinian leadership.

Natan Sharansky’s rubric for identifying raw anti-Semitism remains true: When double standards, delegitimization, demonization of Israel kick-in, you know that Jew hatred lurks just beneath the surface. No amount of policy rationalization or protestations of wanting to advance a peace process can cover up the stink.