Published in The Jerusalem Post and Israel Hayom, July 3, 2015.

Reflections on Jewish and Zionist history, and Israel’s homegrown detractors, while cruising through Europe.

Titus is long gone. The People of Israel, however, live on, live well, till the Land of Israel once again, and make enormous contributions to global arts, culture, ethics, morality, science, medicine and more. Excuse me for feeling triumphant. 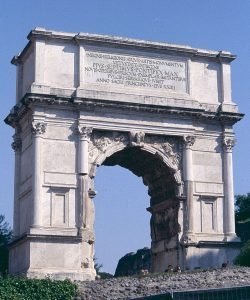 Great waves of emotion tinged with historical echoes washed over me last week as I stood under the Arch of Titus on the Via Sacra in Rome. At first I felt small; then I grew triumphant.

The epic arch was built to commemorate the victories of Emperor Titus, including his destruction of the Second Jewish Commonwealth in 70 AD. Its southern panel famously depicts Roman soldiers parading spoils from the Temple in Jerusalem: the gold menorah, trumpets and showbread table. Potent symbols of Jewish defeat and dispersion.

Yet here I was, a Jew living in the Third Jewish Commonwealth – the modern State of Israel – viewing the arch amidst the tens of thousands of tourists swarming the surrounding archeological park (which includes the Temple of Jupiter and the Coliseum, where Jews were fed to Roman lions for entertainment).

I could only smile in victorious amusement.

After all, the ancient Roman Empire has long dissipated and Lord Jupiter been discredited; while Jewish civilization has prevailed, and Jewish sovereignty has been robustly reborn in the Land of Israel. 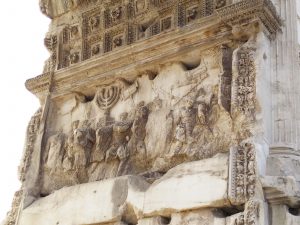 And as for the plundered Temple artifacts themselves: Well, they may be buried deep somewhere in Rome or lost forever. Either way, new vessels are being fashioned in present-day Jerusalem, literally and figuratively, for worship and redemption. Vessels that range from menorahs to flash-memory chips, and from shofars to semi-conductors.

Titus is long gone. The People of Israel, however, live on, live well, till the Land of Israel once again, and make enormous contributions to global arts, culture, ethics, morality, science, medicine and more.

Excuse me for feeling triumphant.

EVERYWHERE I traveled in Europe – Naples, Pompeii, Florence, Pisa, Rome, Cannes, Palma Majorca, Barcelona and more – people in the streets were thrilled to talk to real Jews and Israelis.

(I was on a group trip planned impeccably by Eddie’s Kosher Travel and Kosherica Cruises, aboard a 7,000-person super-luxury liner, which sailed the Mediterranean. It’s a sophisticated, exciting and opulent way to travel).

Curious and surprised to meet us, people immediately began asking questions: Why did we (Jews with North American backgrounds and accents) move to Israel? Have we been to Jerusalem? Is it safe to live in or visit Israel? What about military service?

People seemed to know about Israeli innovation and technology, and about the dysfunctionality and divisions of our Palestinian neighbors. Young and old were impressed by Israel’s achievements, and buoyant about Europe-Israel relations.

Nobody seemed too perturbed about “Zionist conquests,” or concerned about Jewish settlements and Palestinian refugees. (Intelligent interlocutors, however, actually believed that the biblical Philistines and the latter-day Palestinians were one and the same; nonsense that is clearly a victory for Palestinian propaganda, and something that needs to be countered).

Everybody we met wanted to know what the plan is for dealing with anarchic Islamic forces surging across the Middle East. And what really alarms them is the intrusion of radical Islamists into Europe! They understood Israel as a bulwark against such extremism.

THIS ROSY PICTURE stands in stark contrast to the doom and gloom about Israel’s reputation, foreign relations and ties with Europe that we regularly read about in the newspapers.

Perhaps this is because I was meeting plain people in the streets and cafes, not the sophisticated types in universities or parliaments. Or perhaps it is because not everybody has read the poisonous literature coming out of Israel itself.

I am referring specifically to books like Ari Shavit’s My Promised Land, which I forced myself to read while travelling. Given that the book has been translated into half a dozen languages and been lauded by The New York Times and The Economist, I needed to know what messages about Israel the celebrated Haaretz journalist was marketing.

Shavit’s storyline is insidious. No matter how righteous or heroic the Zionist pioneers thought themselves to be, or necessary the Zionist movement was, Shavit finds Israel to be a tragedy, at best. It is colonialism that inevitably went sour.

To Shavit, Israel is villainous in its roots of dispossession (of the Palestinians); horrific in its nuclear policies; evil in its settlement policies; and cancerous in its social policies. It is a country disintegrating into extremist and fundamentalist tribalism. A catastrophe in the making!

Seldom have I read a more guilt-ridden book from somebody considered an Israeli patriot. I stopped counting when my tally of the words “colony” and “colonial,” “evil,” “immoral,” “insane,” “cancerous” and “blind” reached well over 250 mentions.

Where others see decency, he sees brutality. Where others see necessity, he sees grotesqueness. About the only phenomenon that he truly admires in this country is the hedonistic sex, drugs and gay culture of Tel Aviv.

“Hurricanes are howling, precipices are nearing, and cataclysms are coming” – yes, such apocalyptic language is characteristic of Shavit – because only a few “sane” people, like him, are left in this country.

The roots of such depressing prattle, I think, lie in Shavit’s lack of faith in Providence over Jewish history. Shorn of any grounding in tradition, he lacks confidence in the righteousness of our claims to the Land of Israel.

I hope that none of the even-tempered and well-disposed people I met in Europe read Shavit’s fanatic tome. I know that Shavit is wrong, and if Titus could speak, I’m sure he would be forced to agree with me.

For a range of 2015-2016 kosher cruises around the world, see Eddie’s Kosher Travel and contact david@eddiestravel.com