The courageous British commander, Richard Kemp, fights Western moral collapse, and provides hope that that the tide of hatred against Israel can be turned back.

His message is particularly apt for the eve of the Shavuot holiday, which marks the giving of the Torah. Jewish tradition reaches that “Sinah (hatred of Jews) descended into the world at Sinai” – the moment when the Bible was bestowed upon the Jewish People, and Jews were elected as standard-bearers of a Divine moral code. Unfortunately, too many Jews have so absorbed the prevailing hatred that it becomes self-hatred. 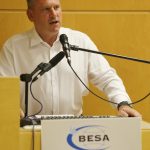 Judeo-Christian principles of honesty, honor, loyalty, family values, patriotism and religious faith are being rapidly eroded; whereas negative values, such as the acceptance of betrayal, duplicity and deceit, are flourishing – across the Western world. And this paves the way to an upsurge in anti-Jewish and anti-Israel perspectives.

That was the audacious message delivered this week by Colonel Richard Kemp CBE, who visited Israel to receive an honorary doctorate from Bar-Ilan University and to lecture at the Begin-Sadat Center for Strategic Studies. (Watch or read his captivating 40 minute lecture).

Kemp was commander of the British Forces in Afghanistan. He first made global headlines in 2009 when he testified in defense of Israel before the UN Fact Finding Mission on the Gaza Conflict, and then the UN Human Rights Council.

Flatly contradicting the nasty Goldstone Report, Kemp confidently asserted that “based on my knowledge and experience as a military commander, the IDF did more during Operation Cast Lead to safeguard the rights of civilians in the combat zones than any other army in the history of warfare.”

Kemp: “This is not because I speak out against the moral bankruptcy, corruption, incitement to terrorism or oppression of the Palestinian Authority; or the murder, brutality and terrorist violence of Hamas, Hizballah or the Palestinian Islamic Jihad. I have spoken out at least as much against Al Qaida, the Taliban, the Iranian regime, the IRGC and many other sponsors of terror and terrorist groups without anything like this level of attempted intimidation.”

“Rather it is for one reason, and that is because I fail to falsely condemn Israel in circumstances where to even be neutral on the subject is itself a crime in the eyes of so many. It is because I have gone further, and used my military experience and my objective view to explain and defend Israel’s legitimate military actions.”

This is where Kemp slices to the core with razor-sharp, pull-no-punches analysis. His assay is that over the past thirty years the morality and values of the West have been undermined beyond recognition; and that this inevitably leads to anti-Semitic and anti-Israel sentiments.

“We have gone from the heroic ‘Tommies of the Valiant’ comic to the promotion of the criminal underworld in ‘Grand Theft Auto.’ From ‘Guns of Navrone’ to the naked violence of ‘Terminator 3,’” Kemp thunders. “This moral relativism is heightened by abhorrence for the traditional Judeo-Christian values of the West and a desire to promote as superior the values of other cultures in a form of all-pervading post-Colonial guilt.”

“The target is Western values themselves; and Israel has become a proxy for the targeted West. This is reinforced by a pervasive and increasing wave of anti-Semitism which intensifies the obsession with Israel; along with the desire to appease violent Islam.”

In Kemp’s view, the Western media is extraordinarily culpable in driving this deleterious shift in values. “Balanced, level-headed, impartial reporting in our media has been replaced by hypocrisy, duplicity, betrayal and sensationalism; the four cornerstones of violent radical Islam, as so often demonstrated on our TV screens by Hamas and the Islamic State.”

“Consider: Hamas and the other Palestinian terror groups use human shields in the hope that Israel will attack and kill their people. They do this for one purpose: to gain the global condemnation of the State of Israel. Their particular target is the media, which they know will magnify and intensify their message to the world and force national governments, the UN, human rights groups and other international organizations to bring down unbearable pressure onto Israel.”

“This can only work of course if the media and these global organizations are willing to be subverted by the terrorist message; willing to see terrorists as victims and Israel as demons. And they are, alas, very willing. The terrorist strategy is executed through a conspiracy with a compliant and complicit media.”

“The media turns a blind eye to wrong-doing, corruption, law-breaking and immorality of one side; while exaggerating, falsifying, distorting and over-emphasizing allegations of wrong-doing against the other.”

His voice rising to a crescendo, Kemp concludes that “to fight for Israel on the international media stage is to fight for the values of democracy, freedom of speech and expression, and civilized social values everywhere. Upon Israel’s survival depends the survival of Western civilization!”

But shouldn’t Col. Kemp be speaking his truths mainly to non-Jewish audiences? Well, yes, he says, but he finds it equally important to speak to Jews and Israelis in order to validate the legitimacy of Israel’s struggle in their own minds.

After all, even the most profoundly committed person with a long view of Jewish history and deep conviction in the justice of Israel, can sometimes only wonder: With so much of the world seemingly against us, might we be wrong?

This message is particularly apt for the eve of the Shavuot holiday, which marks the giving of the Torah. Jewish tradition reaches that “Sinah (hatred of Jews) descended into the world at Sinai” – the moment when the Bible was bestowed upon the Jewish People, and Jews were elected as standard-bearers of a Divine moral code. Unfortunately, too many Jews have so absorbed the prevailing hatred that it becomes self-hatred.

Comes Kemp and says: Fret not. Hate yourselves not. Israel isn’t perfect, but you’re not the problem. It’s the immoral way that others are thinking and are judging you. It’s their loss of values.

Comes Kemp and declares: I am here to reinforce you. Indeed, Kemp’s intrepid words are enormously reinforcing and comforting.

Like the fearless Canadian Prime Minister Stephen Harper and other righteous souls, Kemp gives supporters of Israel hope that that the tide against Israel can be turned back.

Who knows? Perhaps Kemp’s courageous outspokenness will yet prove contagious, among Jews and non-Jews alike.