Published in The Jerusalem Post and Israel Hayom, March 20, 2015.

Netanyahu should capitalize on his sweeping victory to reset the diplomatic table by outlining a pragmatic process that Israel can participate in, and to draw clear Israeli red lines as to acceptable contours of a solution. Doing so is especially urgent since Israel is already facing a renewed international campaign for West Bank withdrawals. 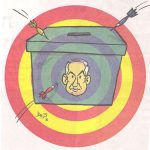 Prime Minister Netanyahu activated a cacophony of global clucking and groaning by his statement late in the election campaign that he no longer viewed establishment of a Palestinian state as a realistic or possible path to peace in the near term. There would be no Israeli territorial withdrawals during his tenure, he said.

While Netanyahu made these hawkish comments in the context of a last-ditch attempt to draw voters to Likud from the hard right, they nevertheless probably faithfully represent Netanyahu’s worldview and assessment of the situation.

Netanyahu, like most Israelis, would prefer a two-state solution in order to bring clarity of borders, stability, and quality of life to Israelis and Palestinians. However, given the track record of Palestinian leaders who have consistently rejected good-faith and far-reaching Israeli peace offers, most Israelis do not believe that a realistic compromise with the Palestinians is in the offing.

Moreover, under current circumstances Israeli withdrawals would likely lead to establishment of a second “Hamastan” in the West Bank (or worse, an ISIS type regime) – not to a stable and peaceful reality.

One in every three Israeli voters opted for Likud (if you factor out Israeli Arab and Haredi voters), which means that Netanyahu is accurately tapping into a mainstream mindset. And the dominant, mainstream Israeli mindset is both realistic and cautious.

It has been this way ever since the Palestinian terrorist war against Israel of 2000-2004 (the second intifada); the rejection by Yasser Arafat and Mahmoud Abbas of sweeping Israeli peace proposals three times over the past 15 years; the emergence of Iranian-dominated enclaves on Israel’s northern and southern borders following Israel’s unilateral withdrawals from Lebanon and Gaza; and Obama’s decision to wedge “daylight” into US-Israel relations while sprinting towards strategic partnership with Israel’s arch-enemy, Iran.

In truth, Herzog was no more likely to bring about establishment of a full-fledged Palestinian state over the next two years than Netanyahu is.

So it’s time for Israel to re-articulate its thinking about the process of achieving Israeli-Palestinian peace. Netanyahu should capitalize on his sweeping victory to reset the diplomatic table by outlining a pragmatic process that Israel can participate in, and to draw clear Israeli red lines as to acceptable contours of a solution.

Doing so is especially urgent since Israel is already facing a renewed international campaign for West Bank withdrawals.

The Obama administration is not-so-subtly threatening to throw its support behind a new United Nations Security Council resolution recognizing Palestinian independence and demanding rapid withdrawal to the 1967 lines (with some itsy-bitsy possible land swaps mentioned as a sop to Israel).

And Obama is likely to revert to his infamous May 2011 “winds of change” speech, in which he demanded that first Israel withdraw – a “full and phased withdrawal of Israeli military forces” to allow for “a sovereign and contiguous Palestinian state” – and only then hash out Jerusalem and refugee issues with the PA.

This, of course, would mean continuation of the conflict and no real Palestinian recognition of Israel’s right to exist. It would simply provide another opportunity for Palestinians to swarm the 1949/1967 lines and to ramp up BDS and lawfare efforts until Israel commits suicide through refugee “return” or the division of Jerusalem. The Palestinians could also interpret administration distancing from Israel as an invitation to violence. And Obama could use the violence not only to heighten pressure on Israel but to cut off the American arms pipeline.

Worse still, there are voices growing among Diaspora Jewry – take the Obama shill, Peter Beinart, for example – to support the administration in “punishing” Israel for its failure to comply with Obama’s push for a Palestinian state. Yes, “punish.” Out of “love” (sic) for Israel, of course!

So the pressure is on, and Israel must respond intelligently. Here are some guidelines and red lines that the fourth Netanyahu administration could adopt:

* Not prejudging the outcome of negotiations: Remember this mantra? It was a staple of regional peace diplomacy for decades, and among other, it meant that a two-state solution was a possible, but not a definite, outcome of a process of direct negotiations between the parties. Thus establishment of a Palestinian state couldn’t be rejected as a possible solution, but it couldn’t be defined in advance as the only possible endgame of talks. Israel should insist on an open-ended process. Perhaps the parties themselves and the international community will yet find different solutions more workable, and even more attractive, as time goes on?

* Regional solutions: Unconventional alternatives to the struggling two-state paradigm must be on the table, including: a Palestinian-Jordanian federation; shared sovereignty with Israel in the West Bank; a three- or four-way land swap involving Egypt and Jordan; and, possibly, a combination of all these approaches. The major Western powers must be willing to drive serious exploration of such alternatives. Arab states too must be willing take responsibility for solving the Israeli-Palestinian conflict and consider investment of tangible resources in “regional” solutions.

* Performance-based process: Remember the “Road Map” articulated by the Bush W. administration? It was a path forward based wisely on incrementalism and reciprocity. It outlined staged moves towards peace by both sides. It sought to create provisional arrangements in the West Bank at each stage, allowing for verification and, if necessary, pauses, in the process if the parties shirked their responsibilities. Israel should insist again on such a guarded, incremental approach.

* Baseline: Israeli-Palestinian negotiations should not begin from any 67 year old armistice line forced upon Israel by Arab aggression; nor “from the point that talks last left off” seven years ago under a previous, defeatist Israeli government; nor from the defensive “security fence” forced upon Israel by Palestinian terrorism; nor from any borders high-handedly dictated in advance by the international community.

Israel’s baseline position at the outset of the talks should be that 100 percent of the West Bank belongs to Israel, by historical right, and that this right is richly buttressed by political experience, legitimate settlement, and security necessity. Only then can Israel hope to obtain a sensible compromise.

* Finality: Israel should demand up front a Palestinian letter stipulating that the Palestinian Authority recognizes that the purpose of negotiations is the termination of all claims between the parties, and that any agreement will have to contain an “end-of-conflict” declaration. Nothing less. Netanyahu should drive home this point: Only a crystal clear message from the Palestinians that the conflict is permanently and fully over might merit the ceding of territory by Israel. This reflects the spirit behind’s Netanyahu’s justified demand that the Palestinian recognize Israel as the legitimate homeland of the Jewish People.

* Gaza: Israel should stipulate that implementation of any accord that might be reached with the Palestinian Authority will be contingent on extension of the accord to Gaza, which means that Hamas will have to be sidelined or sign-on to an eventual deal. Israel should not be in the business of birthing two Palestinian states.

* Security: The radical Islamic winter buffeting this region, and its inroads into the Palestinian national movement, means that the security envelope that surrounds Israel and the Palestinian areas must be militarily controlled by Israel, fully and indefinitely. This includes the Jordan Valley.

* Violence: Any purposeful deterioration of the security situation in the West Bank allowed or abetted by Abbas will be met with a crushing Israeli military response. This will, among other, destroy all the fine infrastructure projects and governance institutions built at great expense in recent years in the PA by Western donor governments and NGOs. Similarly, Hamas should know that Israel plans to once again destroy its ongoing re-armament and tunnel construction program, mercilessly.

* Diplomatic armistice: Israel has no reason to negotiate with, or consider making concessions to, the Palestinians as long as the PA is waging diplomatic warfare against Israel at the International Criminal Court and UN institutions. A complete armistice in this regard must be declared by the PA as a precondition for new peace talks.

* The Temple Mount: The Palestinians must be willing to negotiate shared sovereignty over the place most holy to the Jewish People. For starters, as a pre-condition of Israel’s joining the talks, Jewish prayer must be facilitated on the vast Temple Mount plaza, either through a time-sharing arrangement (similar to that in place at the Cave of Machpela in Hebron), or through a small synagogue tucked away on the fringes of the plaza. This won’t overshadow the two large Moslem structures on the Mount, but will demonstrate Palestinian recognition of the Jewish People’s ancient ties to the holy site and to the holy land.

In sum, Netanyahu should leverage his convincing win in this week’s national election to reframe the parameters of how and what Israel is prepared to negotiate with the Palestinians.