International condemnations: Nu, so what!

Published in The Jerusalem Post and Israel Hayom, December 19, 2014.

Fret not over vacuous resolutions that ceremoniously pronounce upon Palestinian political rights. International condemnations and threats of isolation have been a permanent feature of Israel’s history, and we have survived them all. 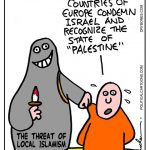 They’re calling it “Black Wednesday.” Two days ago, the European Parliament proclaimed its support for recognizing Palestinian statehood. So did the parliament of Luxembourg. (Previously it was the Portuguese, French and Swedish parliaments).

Simultaneously, the High Contracting Parties of the Fourth Geneva Convention gathered in Switzerland to condemn Israel – only the third time the signatories have met since 1949, and each time only to deal with Israel. And the EU Court removed Hamas from the European list of terrorist organizations.

Now the Security Council is about to take up a Palestinian resolution demanding Israeli withdrawal from the West Bank within two years, or else. Secretary Kerry has declined to say that the U.S. will veto this.

Left-wing pundits and politicians are in a tizzy, warning that these initiatives should set off “loud alarm bells” in Jerusalem. It’s a diplomatic tsunami, they say. And I say: Nu, so what!

So they condemn us. So they “recognize” make-believe Palestinian statehood. Nu, so what! We’ve been there before. Israel will get past this round of condemnations too.

ISRAEL AND THE JEWISH WORLD frets far too much about vacuous resolutions that ceremoniously pronounce upon Palestinian political rights. We need to remind ourselves of Prime Minister David Ben-Gurion’s mordant dismissal of international opinion and institutions. “Ooom shmoom” was his scornful ditty, which is a play on words using the UN’s Hebrew acronym, and Israeli slang for nullity. The “Ooom” (UN) is “shmoom” (insignificant).

Ben-Gurion then added that what counts is what the Jews do, not what the “goyim” say.

What counts is aliyah, the Israeli birth rate, building starts in Jerusalem, the strength of our military, the tone and tenor of our educational, cultural and legal institutions, the Jewish and democratic fabric of our society, the depth of our belief and loyalty to Jewish and Zionist principles. That’s what really counts.

Everything else – our foreign and diplomatic relations, and our standing in the international community – will fall into place if we Israelis are united and confident in our creed.

Having said that, it is obvious to any sane Israeli citizen or statesman that Israel need not needlessly provoke the world into outrage, nor spurn the importance of maintaining decent ties with the governments in Washington, Ottawa, London, Paris, Bonn, Moscow, and more. It’s not comfortable to be in this situation. You can’t deny that the cumulative weight of all these unfriendly resolutions is corrosive to Israel’s standing.

Thus Israel cannot callously dismiss international opinion. “Ooom shmoom” should not be Israel’s approach. But Israel also needn’t obsess with worry over recent developments. It shouldn’t go running to hide in panic because a few foreign parliaments lent their hand to Mahmoud Abbas’ campaign to shift the Israeli-Palestinian conflict from the negotiating room to the court room.

IT IS WORTH REMEMBERING that Jews have not been liked for several thousand years. Our collective effort to be build a Jewish state is not liked much more either. The world has been opposed to core Israeli diplomatic and security policies throughout this country’s existence, from the very beginning. Nevertheless, Israel has survived all the condemnations and threats of isolation.

The State Department reproached Israel for capturing the Galilee and the Negev in 1948. The UN condemned Israel for invading Sinai in 1956. It condemned Israel’s 1967 “aggression,” and excoriated Jerusalem’s reunification. It raked Israel over the coals for annexation of the Golan Heights. It fulminated against Prime Minister Begin’s bombing of the Iraqi nuclear reactor, and of Beirut, etc., etc. The US, by the way, was party to all these condemnations.

The UN and other international bodies have blasted us for the assassination of master PLO terrorist Abu Jihad and many other critical, anti-terror operations abroad. This includes Israeli interdiction of strategic armament shipments from Iran to the Islamic armies on our northern and southern borders. The UN has slap-happily censured Israel for defending itself against Hamas and Hezbollah – in the first and second Lebanon wars, and for operations against Hamas in Gaza in 2009, 2012 and 2014.

The UN annually condemns Israel for (reportedly) building a nuclear weapons capacity, and lambastes Israel for a load of other fabricated evils (from stealing Palestinian water to destroying Palestinian archaeology). The International Court of Justice declared the security fence illegal.

Overall, the UN Security Council has adopted more than 150 anti-Israel resolutions since 1967. (The US vetoed about 50 others).

Nu, so what. None of this should come as any surprise.

As for the current diplomatic campaign against Israel: Internationalizing the conflict and criminalizing Israel was always a central Palestinian strategy, and Mahmoud Abbas has made this centerpiece of his decade as Palestinian dictator. He decided more than four years ago to abandon the track of serious negotiations with Israel, and instead to maximize the window of grace he has with US President Obama to increase international pressure on Israel.

BUT OF COURSE, none of this will get the Palestinians very far, despite the unpleasantness for Israel. No series of condemnatory international resolutions will change the realities on the ground. And the reality is that there is no sovereignty for the Palestinians without negotiated Israeli cooperation, and without much greater Palestinian willingness to compromise.

There is no mini-state or maxi-autonomy for Palestinians (which is really what we’re talking about) without overall Israeli security control in the entire area west of the Jordan River – and this requires a strong and permanent Israeli military imprint in all areas of the West Bank and along the borders. There is no Palestinian state possible without circumscribing maximalist Palestinian demands for a division of Jerusalem or for refugee return. There can be no Palestinian state possible without compromise over settlements, and without Palestinian recognition of Israel as the national homeland of the Jewish People.

Unfortunately, UN and European resolutions that pronounce upon contours and timetables for Palestinian statehood without taking into account these realities, only stiffen the resistance of Abbas (and Hamas) to making the sort of concessions that are required for peace. On the contrary, such diplomatic muckraking only emboldens and radicalizes the Palestinians, and pushes any realistic arrangements far down the road.