Published in The Jerusalem Post and Israel Hayom, October 10, 2014. 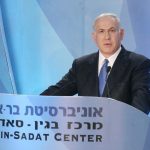 In three detailed speeches over the past 12 months – speeches that haven’t received sufficient-enough scrutiny and consideration – Netanyahu has begun to give us a window into his updated strategic thinking. The bottom line: It’s time to push past the Palestinians, and develop new regional security alliances that are based on shared interests between Israel and conservative, stabilizing forces in the Arab world. The world needs to assimilate and come to terms with Israel’s new strategic mindset.

The situation calls for a reassessment of Israel’s strategic posture. Israel is today facing protracted conflicts with Hamas and Hezbollah, radical Islamists fighting Arab civil wars on almost all our borders, a feeble and feckless Palestinian Authority in the West Bank, and an America stepping back from global leadership.

Israeli Prime Minister Binyamin Netanyahu has begun to draw his own conclusions. In three detailed speeches over the past 12 months – speeches that haven’t received sufficient-enough scrutiny and consideration – he has begun to give us a window into his updated strategic thinking.

The bottom line: It’s time to push past the Palestinians, and develop new regional security alliances that are based on shared interests between Israel and conservative, stabilizing forces in the Arab world.

IT IS NECESSARY to recall a bit of diplomatic history. For the past two decades, Israeli policy has been based on twin pillars of mistaken optimism. Call it the Shimon Peres school of thought.

Peres fallaciously posited that a “New Middle East” was dawning, based on peaceful economic cooperation; and that the Palestinians were ready to recognize Israel’s right to exist and settle all claims in their 100 year long war with Zionism.

The upshot was that the region was stabilizing, and thus Israel could take grandiose “risks for peace” and countenance establishment of a Palestinian state in the West Bank and Gaza.

Both conceptions have collapsed. They were illusions. No peaceful and prosperous “New Middle East” is emerging any time soon, and no Palestinian government is ready to accept the legitimate right of the Jewish People to everlasting patrimony in this land. Mahmoud Abbas has thrown his lot in with Hamas. Be they weak or nasty, the Palestinians cannot be relied upon to act in ways that meet Israel’s security needs.

Netanyahu has assimilated these sober realities, and begun to pull in new directions.

Last October, in a lengthy address at the twentieth anniversary international conference of the Begin-Sadat Center for Strategic Studies, Netanyahu conducted a detailed historical review of the Palestinian national movement. He concluded that the PLO and the PA were light years away from truly accepting Israel as the national homeland of the Jewish People. Without this, he said, “no peace agreement would be worth the paper it would be printed upon.”

In July of this year, Netanyahu gave a major talk to the Tel Aviv Institute for National Security Studies (and followed it up ten days later in a press conference) where he said that true demilitarization of Judea and Samaria as called for in the Oslo Accords is impossible without a strong and permanent Israeli military imprint in all areas of the West Bank.

“In Judea and Samaria there is no power that can guarantee Israel’s security other than the IDF. It’s been proven in Iraq that you can’t depend on local forces that have been trained by the West to stop terror… (And thus) any arrangement will include Palestinian political and economic control alongside Israeli security control. There have been American forces in Germany for decades and they haven’t interfered with German sovereignty. Same thing with Korea.”

“We don’t want to rule over the Palestinians, but the meaning of the necessary security measures is that some of their sovereignty will need to be limited.”

In other words, Israel must build strong fences on every frontier; ensure the non-militarization of the West Bank over the long term with its own forces. At the most, Israel can countenance on its borders a Palestinian province with political and economic autonomy; but not security control or foreign policy freedom.

In his carefully-constructed speech to the UN General Assembly last week, Netanyahu went a step further, arguing that the wild demands of the Palestinians were no longer relevant. He hinted that the way to subsume and circumscribe maximalist Palestinian demands, as well as to curb the annihilationist and maximalist aspirations of Iran and Al Qaeda offshoots like Islamic State – runs through a new “commonality of interests between Israel and leading Arab states.”

“I think that we should make use of the new opportunities, think outside the box, see how we can recruit the Arab countries to advance a more secure, more prosperous and a more peaceful Middle East,” Netanyahu said.

Perhaps Netanyahu is hinting at Israel-Saudi cooperation in knocking back Iran’s nuclear weapons project. Perhaps he is referring to the possibility of Egypt providing land in northern Sinai for an expanded Palestinian state. Perhaps he is thinking of an Israeli-Jordanian confederation in governing the West Bank with and for the Palestinians.

Perhaps he means a regional conference that will legitimize Israel’s national rights and security needs over the heads of the Palestinians, and place the irritating Palestinian problem into proportion and perspective.

Earlier this week, Netanyahu emphasized to Fareed Zakaria of CNN that the only way to ensure that territory ceded by Israel to the Palestinians does not turn into a “third Iranian enclave around Israel’s border” was a long-term Israeli security presence in any West Bank state. “We have to adjust our conceptions of sovereignty. I don’t know if there’s absolute sovereignty anywhere. We’re all tied to limitations,” Netanyahu said of Palestinian ambitions.

NETANYAHU is confronting the fundamental realities that lie at the core of Israel’s relationships with the Palestinians and the surrounding, collapsing Arab world. He is sweeping aside the misconceptions that undergirded the failed policies of the past twenty years. He is articulating a worldview that is based on realism, not on empty optimism; on the region as it is, not as we messianically would like it to be.

Unfortunately, most world leaders have spent the past generation building-up and inflating Palestinian expectations. Consequently, Palestinian demands haven’t been modified or moderated since the advent of the Oslo process; in fact, they have hardened and radicalized. All creative thinking about alternative, regional solutions to the Palestinian-Israeli conflict has been shut down.

But if world leaders take a close look at the rapid melt-down of the Arab state system, and consider some unconventional visions of the Israeli-Palestinian future, they might see the value of Netanyahu’s thinking about broader Arab-Israeli cooperation in these dangerous times.