Jews no longer need to scorn the Church, and Pope Francis should be warmly welcomed to Israel. But when he visits next week, the Pope ought to speak ever more forthrightly about recognition and security for Israel. In this column, I’ve penned some language for him to use…

This entire newspaper would not suffice to recap the anti-Jewish doctrines promulgated by Church Fathers which guided Catholic theology and practice down to the middle of the last century. For centuries, Jews were rejecters of Christ, “perfidious” objects of contempt to be isolated and humiliated until they “saw the light,” a non-people shorn of their covenantal heritage including the right to the Land of Israel.

Inquisition, blood libel, pogrom, burning of the Talmud and burning of Jews at the stake, ghettoization and Holocaust – these were the fruits of 2,000 years of vicious Christian anti-Semitism.

In our generation, one Pope was complicity silent throughout the Holocaust. Another Pope warmly embraced Yasser Arafat way back when (in 1982) no-one else would go near the terrorist chieftain. It took until 1993 for the Vatican to accord diplomatic recognition to the State of Israel.

But this is not the whole story, and it is wrong not to appreciate the vast strides forward of recent years in Christian-Jewish relations and Vatican-Israel ties.

The ancient Christian anti-Semitism that fueled the Nazi movement has since been roundly repudiated by the Church, beginning with Nostra Aetate in 1965 and expanded upon by Pope John Paul II.

John Paul II significantly changed the way in which Christians view, and teach about, Jews. He affirmed that God’s covenant with the Jewish people retains eternal validity; termed anti-Semitism a “sin against God” and called on the faithful to do “teshuva” for misdeeds against the Jews (using the Hebrew word for repentance); respectfully attended synagogue services and spoken of Jews as “elder brothers”; acknowledged Israel’s right to exist and its right to security; and established diplomatic relations with the State that embodies Jewish continuity.

John Paul II’s millennial pilgrimage to Israel in 2000 was indeed an historic voyage.

Pope Francis, who arrives in Israel on Sunday, has deep friendships with the Jewish community of his homeland, and a track record of teaching respect for the Jewish People. Additionally, he has spoken of Christianity and Judaism as partners, not adversaries, in the modern world; a world where a global struggle is underway against moral relativism on the one hand, and radical religious (mainly Islamic) extremism on the other.

Consequently, Francis should be warmly welcomed in Israel, to build on the bridges of understanding and cooperation that have been established.

This is all the more true when we broaden the lens beyond Catholicism, to the Christian Evangelical world that has become Israel’s best friend in global affairs. Israeli and Jews everywhere need to be cognizant of and grateful for the moral, spiritual, financial and political support of these believing Christians. They pray and lobby for Israel every day.

AND YET, many in the Israeli religious community, in particular, still channel fear and resentment towards Christianity in general, and the Vatican in particular. They scaremonger about purported Vatican takeovers of Jewish sites (like King David’s tomb on Mt. Zion), and relate with disdain to well-meaning Christian clergy and even to interfaith cooperation among lay leaders.

I have seen angry Jewish religious treatises and newsletters which dismiss the Vatican’s warmer touch as Catholic lip-service, a tactical change in tone forced upon the Church by political realities. They assert that the Church’s goal remains the “theoretical, spiritual and practical destruction of the eternality of Israel,” and the “collapsing of the State of Israel by supporting anti-Israel terrorist organizations, under the cover of concern for justice and humanity.”

I say that such radical unfriendliness towards Christians and the Pope is wrong – morally, tactically and educationally.

Morally, the Jewish People and the State of Israel ought to amicably adjust to favorable change in Christian attitudes where such exists, and it does.

Tactically, we need not alienate millions of fair-minded Christians around the world. We have no need to make enemies out of friends and to spurn good will where it is proffered.

Educationally, contempt for the Church is, I feel, somewhat passé. As a proud people restored to its homeland, we no longer need to scorn. We have the strength to accept the reformed Church and work with its leaders, to mutual benefit.

In accepting the Vatican’s outstretched hand, I don’t mean to erase the memory of our galut years; of the Jewish People’s sad sojourn in the Diaspora as a people despised by the Church. Even the friendliest current voices cannot drown out Church history. It’s not humanly possible. We certainly have the right to stand aloof from the past attitudes and conduct of the Church.

Furthermore, distinguishing between today’s pro- and anti-Israel Christians is not always easy for Jews. The lines blur between Bishop Tutu’s rotten Anglican-missionary-colonized heart, pro-BDS Presbyterian and Episcopalian churches in the US, and the diabolically anti-Israel Church of Scotland, on the one hand; and the newly Israel-friendly Vatican and even friendlier Evangelical churches around the world, on the other.

But we have an obligation to discern and appreciate these differences, and respond maturely to each in kind.

And it would be appropriate for the Pope to explicitly distance Rome from the radical Protestant churches that seek to boycott Israel and that deny the Jewish People’s innate connection to the Land of Israel.

I’ve helpfully penned some language for the Pope. This is what I’d like to hear from him in the coming days:

“The Heavenly Father is today peering down at us from his perch above as we kneel in penitence and renewed brotherhood. I wish to repeat in the strongest possible way that hatred of Jews, of Judaism, and of the Jewish State of Israel stand in complete contradiction to the Christian vision of human dignity. Anti-Semitism is a sin against God. Calls for the eradication of the State of Israel constitute a great sin against God. Attempts to single out, boycott and demonize the State of Israel are intensely sinful too.

The permanence of Israel is part of God’s design to enrich the world, to make it a better place for His children. Sustained by its faith in the Lord, even in its millenary dispersion, the Jewish People has preserved its identity, its rite, its tradition, and its special connection to the land of the Bible.

I acknowledge the Jewish People’s historical and religious roots, and national rights, in this land and this Holy City of Jerusalem, while concomitantly upholding the rights of others. I deeply understand and appreciate Israel as the national homeland of the Jewish People, and call upon the Palestinian people to so likewise in order to bring true peace. I believe that the two peoples can live side by side in mutual recognition and dignity, bringing about an end to all claims in a long conflict.

While this holy city of Jerusalem belongs to believers of all three great faiths, I must gratefully acknowledge that under your administration for the past almost fifty years Jerusalem has flourished like never before and has been kept open to all who seek to worship God.

I furthermore find myself obliged to salute the State of Israel for its promotion and protection of Christian rights and institutions in this holy land, across seven decades. I am, of course, disturbed by recent reports of vigilante assaults on Christian properties, but I expect and know that Israel will act to suppress these acts of faithlessness.

Alas, I cannot fail to note and lament the fact that in Arab and Islamic lands across the Middle East, mass persecution of Christians and wanton destruction of Christian holy sites and properties has become the norm. Entire Christian communities in Egypt, Iraq and Syria, which have existed for centuries, are essentially being wiped out. Human and religious rights have been trampled under the boot of radical ideologies and vicious dictatorships.

Let us pray here together for the security, justice and recognition for Israel that she so richly deserves; for the justice that is the right also of your neighbors; and for the grace of a real and deep brotherhood between our faith communities. May peace dwell in your walls, prosperity in your palaces. Amen.” 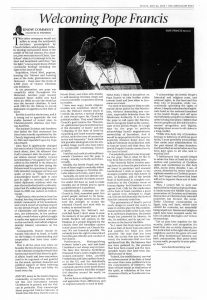