For the next two-and-one-half years, until Obama’s term comes to a blessed end, we can expect more of the same effrontery from Putin. Alas, we can expect similar impudence and defiance from the Iranians and Turks too. 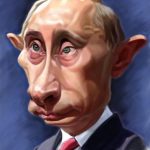 In fact, what happened this weekend in Eastern Europe should come as no surprise to anybody who has followed the Obama administration’s purposeful engineering of America’s decline on the world stage.

You see, I have never believed that US President Obama’s foreign policy is ham-handed or weak. I have never ascribed Obama’s zig-zagging on Libya, Egypt, Iran and especially Syria, along with his failed reset in relations with Russia, to indecision, inexperience or incompetence.

Obama is none of these frail things. He is neither naïve nor inept. He is quite decisive when he wants to be, and very able in advancing his agenda when he really wants to hit the goal.

Moreover, none of these descriptions explain his apparent indifference in the face of America’s decline. Obama has care-freely allowed America’s international reputation and awesome global power to waste away. Why?

The answer is that Obama is clearly out to emasculate America; to doggedly drag it down, purposefully so. He seeks the weakening of the United States on the global stage as a good and necessary outcome. He has set this as one of the key goals of his presidency – and he is doing a very good, skillful job at hitting his target!

In short, the nonchalance of Obama as American global power and influence decays is doctrinaire. He ideologically intends it.

From day one, Obama has not been comfortable with American leadership in world affairs. He explicitly views America’s past global performance to be arrogant and high-handed; to be militaristic and not completely moral. During his first campaign, he called America “overbearing.”

Dozens of times, he has made it clear that he views America not as the leader of the world or the free world, but at best as a partner in the community of nations.

Obama very clearly believes that the humbling of America will bring healing to the world; that the diminishment of America’s ability to throw its weight around will make room for other, just-as-moral powers to emerge (such as, perhaps, powerful Islamic actors or even Putin!); that the denouement of America will elevate world politics to a better sphere. Don Quixote-like, Obama thinks that he will be leaving the world a better place by cutting unexceptional America down to size.

Taking advantage of a war-weary American body politic, and camouflaging his retreat from leadership as a new form of global “engagement” (whatever that means), Obama has proceeded very nicely in wrenching the United States off its traditional, honorable moorings. In five short years, with three to go, he has succeeded in squandering centuries of American might, prestige and credibility.

In recent months, Obama has granted Russia’s Putin and Iran’s Hasan Rouhani gargantuan international victories. He has given Syria’s Assad a new lease on life, emboldened Iran and its allies like Hezbollah, and re-energized the morally-bankrupt UN. All the while, Obama has played Hamlet about his own authority to strike Syria, and equivocated about the world’s ability to deny Iran enrichment. All of which has trashed US credibility.

It is no wonder, then, that Putin fears Obama not at all, and feels free to re-take the Ukraine without serious repercussion.

For the next two-and-one-half years, until Obama’s term comes to a blessed end, we can expect more of the same effrontery from Putin. Alas, we can expect similar impudence and defiance from the Iranians and Turks too.

There is no one in Washington to ride herd and set limits on the nerve of these radical actors. The world has no sheriff. Which unfortunately, is exactly the way Obama likes it.