Left and Right – are doing Israel a disservice by inflating the boycott bogeyman. Israel should be given the freedom to make diplomatic-security decisions free of false threats and without having to mollify feverish forecasters.

Published in The Jerusalem Post and in Israel Hayom, February 14, 2014. 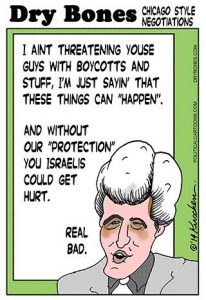 Everyone’s talking about it. If you run a search for “Israel Boycott,” Google News brings up 58 pages of news items with 58,000 results for January-February alone.

In fact, the “threat” of a global boycott against Israel is so obsessively being talked about these days that you would think it a clear and present danger. Indeed, you would think that it was a greater threat than, say, the dangers stemming from the Obama administration’s capitulation to Iran on the nuclear issue.

The problem with this story is twofold: First, it’s not true. Nobody of any grand economic significance to Israel is actually boycotting this country. Nor will they to any appreciable degree. So the threat isn’t really such a threat.

Second, the menace of BDS is being overstated for political purposes. The Left, and, perversely, part of the hard Right, is deliberately prophesying doom and gloom. For differing reasons, each camp is playing a foul and perilous game.

As I say, there is no real boycott threat, because money goes where the business is good, and Israel is very good business.

Does anybody really believe that because of yet another ho-hum breakdown in the limp and long-running show called Israeli-Palestinian negotiations, international companies are going to stop buying the best Israeli technologies?

Foreign direct investment in Israel stood at $9.4 billion in the first 10 months of 2013, matching the total for all of 2012 and probably exceeding 2011’s $10.8 billion total. Venture capitalists invested $899 million in Israeli companies last year, a 41 percent increase from the previous year. The Israel Export Institute forecasts that Israeli exports will grow 2.5% this year. Exports to unfriendly Europe were up 4 percent last year, even though the high shekel exchange rate has made Israeli products less competitive and despite European economic depression.

Microsoft has purchased 11 Israeli companies, including Whale Communications for $80 million. The multinational’s research and development center in Israel employs a staff of about 600. Many international companies maintain research and development centers in Israel, including IBM, Intel, General Motors, General Electric, Cisco, Deutsche Telekom, Lockheed Martin, CA Technologies, PayPal and McAfee. Chip designer Marvell Technology, for example, has two R&D centers in Israel that employ more than 1,200 people. The company, which entered Israel 10 years ago with its acquisition of Galileo, has made investments and acquisitions in Israel totaling $3.5 billion. Intel has two R&D centers in Israel. Its “Ivy Bridge” and “Sandy Bridge” Intel microprocessors, which accounted for 40% of Intel revenues in 2011, began in Israel.

Lockheed Martin now plans to set up a technology development center in Israel, and is collaborating to build the IDF Military Intelligence Corps center in the Negev – a program worth over $200 million.

All this is without touching the military and defense field, where the business is big and sensitive. Each year Israel sells the U.S. military about $1.5 billion in advanced items, from specialized munitions to life-saving armor and sensors for intelligence, surveillance and reconnaissance. U.S. and Israeli manufacturers are now partnering to sell Israeli rocket and missile interceptors to U.S. allies, as well.

Does anybody really believe that because of yet another ho-hum breakdown in the limp and long-running show called Israeli-Palestinian negotiations, international companies are going to stop buying the best Israeli technologies?

Does anybody really believe that if US Secretary of State John Kerry points an accusing finger at Prime Minister Netanyahu, the major international energy companies are going to pass up the opportunities for lucrative business partnerships with Israel?

The answer is no. If Israel continues to produce technologies with a clear qualitative edge at competitive prices, there will be many customers to buy them. Consequently, the specter of Israel’s sequestration and boycott by the world is overblown, and in any case Israel could manage most degrees of negative aftereffect.

There are many other clear signs that a global boycott of Israel does not exist and is not imminent. Israel was just admitted to OECD, the important Organization for Economic Co-Operation and Development; to CERN, the European nuclear research consortium; to the Pacific Alliance, a Latin American trade body; and to WEOG and JUSCANZ, important UN regional consultative groups of democratic countries.

Of course, Israel has a real problem with the far Left, including academic factions like the American Studies Association, church groups like the American Presbyterians, or unions like the British Transport Workers. I don’t minimize or dismiss the deleterious long-term impact on public opinion of such radical actors.

But Israel’s troubles with these extremists are not new, nor are they getting wildly worse, nor are they going to get much better any time soon – no matter what happens with John Kerry’s framework agreement. And more to the point, I argue that the political posturing of such fringe boycotters has no hard economic impact for the foreseeable future.

Politicians on the Israeli Left and left-wing activists in the world Jewish community are narcissistically inventing and exaggerating the so-called boycott because it’s a useful tool to press the urgency of their beloved two-state solution. They conjure up some kind of “international community” that is truly appalled by Israel’s settlements and fed-up with the stalemate regarding Palestinians. In this narrative, Israel is doomed unless it swiftly ends the “occupation.” (John Kerry is just echoing what he is hearing from Tzipi Livni, Yair Lapid and other leftist friends in Israel).

Politicians on the Israeli Right and right-wing activists in the world Jewish community seem just as happy to cry “boycott!” because it provides evidence that the world is determined to wipe Israel off the map – as they have always warned. Some parts of the political Right and some right-wing groups are employing the conjured-up threat of a boycott to rally the troops, to circle the wagons, to fundraise, and to create a justification for their own organizational existence.

To its credit, the Israeli cabinet is taking a cautious approach, neither disregarding the boycott issue nor dramatizing it. Proposals that have been made by some ministers for sweeping and expensive government activities to “combat” boycotts have been questioned by other ministers. I’m not sure that the State of Israel should be taking the lead on this issue. It is, perhaps, better tackled by Diaspora Jewish advocacy organizations.

In any case, both extremes – Left and Right – are doing Israel a disservice by inflating the boycott bogeyman. Israel should be given the freedom to make diplomatic-security decisions free of false threats and without having to mollify feverish forecasters.