Published in The Jerusalem Post and Israel Hayom, January 17, 2014.

The Canadian prime minister, who arrives in Israel on Sunday, has emerged as a courageous global voice of principle about Jews and Israel. His bold words and actions give Israelis hope that there are indeed many decent people, some of them in positions of power, who will not bow to demonization or to the Orwellian twisting of language and history that habitually pertains to Israel these days. 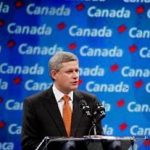 It hard to comprehend the depth and consistency of Canada’s strong support for Israel in recent years without appreciating the deep moral underpinnings of Prime Minister Stephen J. Harper’s worldview.

“Canada has proven once again that morals come before political expediency, and that policy must reflect principles and values,” said President Shimon Peres when Canada cut diplomatic relations with Iran in 2012. “I thank Canada for taking a stance based on the highest morals, and hope that other nations will see Canada as a role model.”

There are four pillars that undergird Prime Minister Harper’s approach.

First, the Holocaust weighs heavily on Harper’s mind, and colors his view of world affairs. “Remembering the Holocaust is not merely an act of historical recognition, but an undertaking. The same threats exist today… Memory requires a solemn responsibility to fight those threats…. And unfortunately, Israel remains a country under threat – threatened by those groups and regimes who deny to this day its right to exist,” Harper said in 2006.

Second, Harper clearly understands the nature and dangers of modern anti-Semitism. His government has explicitly adopted Natan Sharansky’s 3-D rubric, and slammed the “constant barrage of rhetorical demonization, double standards, and delegitimization of Israel.” In fact, the government has signed and endorsed the “Ottawa Protocol on Combating Anti-Semitism” (developed at the 2010 meeting in Ottawa of the Inter-Parliamentary Coalition for Combating Anti-Semitism), which is the only global working definition and concrete plan for combating anti-Semitism, especially state-sanctioned anti-Semitism.

Harper: “Why does Israel remain under threat? Make no mistake; look beyond the thinly-veiled rationalizations. They (Israel’s enemies) hate Israel, just as they hate the Jewish people. Our government believes that those who threaten Israel also threaten Canada, because, as the last world war showed, hate-fuelled bigotry against some is ultimately a threat to us all, and must be resisted wherever it may lurk.”

Harper’s similarly-impressive foreign minister, John Baird, said: “Harnessing disparate anti-Semitic, anti-American and anti-Western ideologies, the ‘New Anti-Semitism’ targets the Jewish people by targeting the Jewish homeland, Israel, as the source of injustice and conflict in the world, and uses, perversely, the language of human rights to do so. We must be relentless in exposing this New Anti-Semitism for what it is.”

Third, Harper’s government clearly sees Israel as Canada’s “friend and ally in the democratic family of nations.” Speaking to the Herzliya Conference in 2012, Baird said that “Israel embodies values that Canada holds dear and respects. Israel is a beacon of light in a region that craves freedom, democracy, human rights and the rule of law.”

Fourth, Harper takes a meta-historic view of Israel’s resurgence as a modern nation-state. Speaking on Israel’s 60th anniversary, he mused poetically about Zionism. “From shattered Europe and other countries near and far, the descendants of Abraham, Isaac, and Jacob made their way home. Their pilgrimage was the culmination of a two-thousand-year-old dream; it is a tribute to the unquenchable human aspiration for freedom, and a testament to the indomitable spirit of the Jewish people.”

“Soon,” he said, “I hope to have the opportunity to travel to Israel to see the ‘miracle’ with my own eyes; to see how millions of people from all over the earth, with their countless different languages and traditions, came together to build a modern, prosperous, vibrant, democratic country. It is a pilgrimage I have wanted to make for a long time, but my determination to do so was redoubled this spring after I visited Auschwitz. I want to see first-hand what the survivors of the Holocaust and their descendants have accomplished, for theirs is truly an achievement of resilience and renewal unsurpassed in human history. I also want to go to deliver in person the message of Canada’s unshakable support for Israel.”

Harper has gone even further, stating that “The persistence of the Jewish homeland is a sign of hope and a symbol of our faith in humanity’s future, in the power of good over evil.”

There is a diplomatic price to be paid for such principled defense of Israel. Yet Harper is undeterred.

“The easy thing to do,” Harper told the Ottawa conference on anti-Semitism, “is simply to just get along and go along with this anti-Israeli rhetoric, to pretend it is just being even-handed, and to excuse oneself with the label of ‘honest broker’. (But) Canada will take a stand (in support of Israel), whatever the cost. Not just because it is the right thing to do, but because history shows us, and the ideology of the anti-Israeli mob tells us all too well, that those who threaten the existence of the Jewish people are, in the longer term, a threat to all of us.”

Prime Minister Harper has made good on his words. As detailed in these pages one week ago, the Harper governments since 2006 have consistently backed Israel’s defensive actions against terrorists, and stood up for Israel in the international community at the most critical moments.

Just to recall one example: At the important G-8 summit in 2011, Prime Minister Harper single-handedly blocked an American draft that sought to specify Israel’s pre-1967 borders as the starting point for peace talks, because the resolution ignored other key issues such as recognition of Israel as a Jewish state and demilitarization of a Palestinian state. Harper stood up to enormous pressure from US President Obama and then-French President Sarkozy.

In the end, G-8 leaders conceded the merit of Stephen Harper’s position, and issued a balanced statement urging Israel and the Palestinians to resume negotiations (with no mention of the 1967 lines).

In acting in this way, Harper has emerged as a voice of critique, courage and principle in a world that is in danger of losing its conscience about Jews and Israel.

Harper believes that in the long run moral stances are the most pragmatic positions of all. He believes that the pragmatic and often cynical calculations that characterize so much of modern diplomacy – bring ruin to the global order.

For Israelis, this is very important. I, and many of my friends, relatives and colleagues in this country, frequently feel very much isolated from today’s global community; a world which appears to be increasingly indifferent to Israel’s existential dilemmas.

Alas, this is a world in which the leadership of Iran vows to erase Israel, asserts that the Holocaust never happened, and continues to build a nuclear weapon – while receiving applause at the UN in New York, and praise for “moderation” in Geneva and Washington.

Prime Minister Harper’s bold words and actions give Israelis hope that there are indeed many decent people, some of them in positions of power, who will not bow to demonization or to the Orwellian twisting of language and history that habitually pertains to Israel these days.

Thank you, Prime Minister Harper, for not despairing of the world or abandoning Israel and the Jewish People.