Published in The Jerusalem Post and Israel Hayom, January 10, 2014.

Canada’s backing of Israel is comprehensive, concrete and weighty, setting a principled, pro-Israel precedent and example. Prime Minister Harper and his team should be warmly welcomed in Jerusalem this month as super-valuable allies and trusted friends. 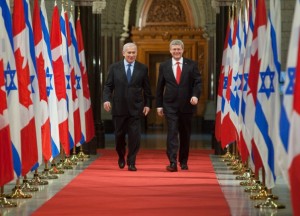 Under the leadership of Prime Minister Stephen J. Harper, who is to visit Israel in nine days, Canada has emerged as Israel’s staunchest ally in the world.

Yet many observers dismiss Canada as a bit player on the international scene, and write off the relevance of Canada’s interventions on behalf of Israel.

They couldn’t be more wrong.

The record shows that Canada’s support for Israel is comprehensive, concrete and weighty. It is frequently a step ahead of the rest of the world, setting a principled, pro-Israel precedent and example. It is of significant, often critical, diplomatic value.

The senior-most political and diplomatic officials in Jerusalem deeply respect and appreciate Canada’s backing. They hold Prime Minister Harper in the highest regard.

Canada was the first country in the world to immediately suspend direct aid to the Palestinian Authority when Hamas was elected in 2006, because of that terrorist organizations’ refusal to meet the criteria for international legitimacy: an end to violence, unconditional recognition of Israel, and acceptance of previous agreements. Prime Minister Harper said: “If institutions committed to terrorism are playing a role in the Palestinian state…that is an indication to me that the road to [Palestinian] democracy has not been traveled very far. Democracy and the continued advocacy of terrorism are fundamentally incompatible objectives.”

Canada’s position was quickly adopted by the US and the EU.

Canada was the first country in the world to withdraw its support from the second UN World Conference Against Racism, known as Durban II. Noting the anti-Semitic and anti-Israel hate-fest into which the original Durban conference degenerated, the Government of Canada led the boycott of the 2009 meeting, and was one of only 15 countries to boycott the Durban III summit in 2011.

Canada was the first country in the world to robustly defend Israel’s operation against Hezbollah, early during the 2006 Second Lebanon War. Harper said that “responsibility for the escalating violence in the Middle East rests entirely with those who have kidnapped Israeli soldiers. Israel has the right to defend itself.” When many countries urged restraint on Israel, Harper said “the onus to end this escalation is on the other side, and I would urge them to return the prisoners.” When other countries accused Israel of over-reacting and using disproportionate force, Harper said “I think Israel’s response under the circumstances has been measured.”

In the aftermath of the war, Prime Minister Harper opposed a one-sided statement at the Francophonie summit that sought to deplore the war and recognize the victims of Lebanon. Harper insisted that the resolution recognize losses on both sides.

Canada’s steadfast position ultimately won the support of the other Francophonie members and led to a balanced consensus resolution.

During Operation Cast Lead in 2009, Canada likewise stood by Israel against Hamas aggression from Gaza. Then-Foreign Affairs Minister Lawrence Cannon stated: “Israel has a clear right to defend itself against the continued rocket attacks by Palestinian militant groups which have deliberately targeted civilians. First and foremost, those rocket attacks must stop.”

At the G8 summit in 2011, Prime Minister Harper blocked American draft language that specified Israel’s pre-1967 borders as the starting point for peace talks, because this ignored other key negotiating framework factors such as recognition of Israel as a Jewish state and demilitarization of a Palestinian state. Harper stood up to pressure from US President Obama and then-French President Sarkozy.

In the end, G-8 leaders conceded the merit of Stephen Harper’s position, and issued a balanced statement urging Israel and the Palestinians to resume negotiations (with no mention of the 67 lines).

During Operation Pillar of Defence in 2012, Canada vigorously supported Israel’s right to defend its citizens and blamed terrorists in Gaza for the escalation in violence. Foreign Affairs Minister John Baird described Israel’s right to self-defense in the context of the broader conflict between terrorism and democracy: “Far too often, the Jewish people find themselves on the front lines in the struggle against terrorism, the great struggle of our generation…Canada condemns the terrorist group Hamas and stands with Israel as it deals with regional threats to peace and security.”

Canada also has consistently stood up for Israel, often as a lone voice, in the G-20, the UN Human Rights Council (UNCHR), International Atomic Energy Agency (IAEA), and the UN General Assembly (UNGA). Over three years that it sat on the UNCHR in Geneva, Canada stood alone in defense of Israel – eight times casting the only “no” vote against unfair condemnations of Israel. Also in Geneva, Canada played a critical role in getting Israel membership for the first time in the Western European and Others Group (WEOG), a status that Israel has sought for years.

In November 2012, Foreign Minister Baird personally cast Canada’s vote against UNGA recognition of Palestinian statehood. Canada was among only nine countries that voted against this resolution, making the case that it undermined direct Israeli-Palestinian negotiations as the basis of Middle East peace. Baird said: “We took a principled stand. We believe that statehood is a product of peace with Israel, and the Palestinian Authority is trying to go around Israel to the UN to get what they couldn’t get at the negotiating table.”

Prime Minister Harper’s government has taken a lead role at the IAEA in Vienna and other international forums in opposing the Iranian drive for nuclear weaponry, and in backing sanctions against Iran. In 2012, Canada suspended diplomatic relations with Iran by closing its embassy in Tehran and expelling all Iranian diplomats from Ottawa. It also outlawed Iran’s Islamic Revolutionary Guards Corps Qods Force under Canada’s Anti-Terrorism Act. Canada expanded its sanctions in 2013 by announcing a prohibition on all imports and exports from Iran, and by banning a series of Iranians and Iranian entities under the Special Economic Measures Act.

Canadian resoluteness in opposing Iran has drawn-in other Western countries. Many joined the walk-out boycotts that Canada annually led of Mahmoud Ahmadinejad’s speeches at the UN. Almost all Western nations have supported the tough UNGA resolution on Iran’s horrendous human rights record that Canada sponsors every year.

Canada also led the world in expressing deep skepticism of the November interim agreement in Geneva between the P5+1 and Iran. At the time, John Baird said that: “Today’s deal cannot be abused or undermined by deception. The Iranian people deserve the freedom and prosperity that they have been denied for too long by the regime’s nuclear ambitions. Until then, Canadian sanctions will remain tough, and in full force… We will evaluate today’s deal not just on the merits of its words, but more importantly on its verifiable implementation and unfettered access of all Iranian nuclear facilities.”

Since then, world leaders have been forced to acknowledge the validity of Canada’s doubt about Iran’s compliance intentions and the soundness of Canada’s concern about premature withdrawal of sanctions. Some have accepted Canada’s contention that the scope of the talks must be broadened to include Iran’s sponsorship of terrorism and its systemic violation of human rights.

It is furthermore important to note that Prime Minister Harper’s government has significantly enhanced defense, intelligence and law enforcement ties between Canada and Israel. Cooperation accords have been signed in sensitive areas, and there have been frequent high-level exchanges, including reciprocal visits by the defence ministers, military chiefs-of-staff, intelligence chiefs, and national security advisors of the two countries. Observers should not underestimate the quiet professionalism and outsized reach of Canada’s security personnel across the Middle East and around the world.

Speaking to the Herzliya Conference in January 2012, Foreign Minister Baird forthrightly said that: “Israel has no better friend in the world than Canada; no stronger ally who will stand up for you. We won’t stand behind you; we will stand shoulder to shoulder with Israel. Canada will not remain silent while the Jewish state is attacked for defending its territory or people.”

No country in the world is as generous in its trailblazing support of Israel, without apologies or hesitations. Canada speaks out and acts to defend Israel, consistently before anybody else, without feeling the need to be “politically-correct” and to “balance” its statements with (im)moral ambiguities about the Arab-Israeli conflict.

Prime Minister Harper and his team should be warmly welcomed in Jerusalem this month as super-valuable allies and trusted friends.