Published in The Jerusalem Post and Israel Hayom, January 3, 2014. 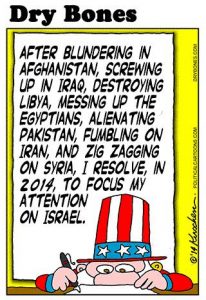 The only thing worse than being wrong is being right. One year ago today, I accurately forecasted in these pages that President Obama would cut a deal with Iran over Israel’s objections, allowing Tehran to keep its nuclear enrichment facilities and freeing itself of sanctions by promising to halt 20 percent enrichment. Precisely what happened.

I also correctly calculated that Washington would wedge Israel and the Palestinian Authority into renewed peace talks, and that Prime Minister Netanyahu would again freeze plans to build E-1. I estimated that the Moslem Brotherhood’s Mohamed Morsi wouldn’t last long as Egyptian president. Bingo.

But I was wrong in expecting a quick breakup of the current Israeli coalition government. (Wait a bit more…) I was also wrong, unfortunately, in envisaging the election of a Religious Zionist chief rabbi. And I erred, fortunately, in reckoning that the Syrian civil war would spill over into real conflict on the Golan.

Barack Obama: The US president truly abhors nuclear proliferation. So he really does not want the Iranians to test or produce a nuclear bomb on his watch. In Geneva, he’ll cut whatever deals are furthermore necessary to postpone Teheran’s bomb production for a few years; three years to be exact. As for the rest of us, well, Obama doesn’t really care about Israel, or the Palestinians, Egyptians, Syrians and Saudis. He isn’t going to invest any more American “blood, treasure and tears” in the Middle East. Killer drones against the Al Qaeda types do the work from afar just fine. In any case, Obama knows that his legacy boils down to this and this only: Whether or not Americans can keep their existing health insurance plans.

John Kerry: All this Mideast peace-processing is a prelude to Secretary Kerry’s planned run in the Democratic primaries – against Hillary Clinton – for president of the United States. He will be a formidable contender, just as he is a formidable diplomatic juggernaut now. Of course, it’s easy for Kerry to beat up on Netanyahu and Abbas, the two Mideast actors most dependent on America. Had he challenged the Russians or Iranians (as he should have), it would’ve been tougher going. And then he would have been better prepared to take on and beat Hillary. She will be no pushover.

Benjamin Netanyahu: The Prime Minister has “crossed the Rubicon” and no longer feels any residual political loyalty to Judea and Samaria residents or to hard-right voters. His willingness to rollback Yesha is easily deduced from his insistence on an Israeli military presence, only, in the Jordan Valley. While he has no near-term plans to drag Israelis from their homes in Bet El or Hebron, his imminent agreement to John Kerry’s formula for a Palestinian state based on the 1967 lines will mark a further retrogression in Israel’s diplomatic stance. Netanyahu thinks that a rhetorical “framework agreement” with the Americans and the Palestinians is the best way to manage the conflict for several years hence. He thinks it will restrict Palestinian options, prevent the PA from criminalizing Israel in international legal forums, and ward-off European boycotts. But I think that he playing with fire, and that the gambit will backfire on Israel. World demands of Israel will only increase following the framework agreement; and, after feting Israel for a few days and praising Netanyahu for a few minutes, the world will be back in no time at all to threaten Israel with boycotts unless it acts on its latest concessions.

Mahmoud Abbas: The Palestinian leader is getting very old and frail, and there is no succession plan in place, short of a bitter free-for-all with Hamas leaders in the mix. Abbas is searching for a legacy, which could be a “framework” deal with Israel but could also easily be more unilateral moves against Israel on the global front. Either way, Abbas has got to hurry; I’m not sure he’ll be around by this time next year. In the meantime, the Palestinian Authority continues to huff and puff and blow evil smoke at Israel while raking-in the international aid dollars, euros, krones, yens, francs and deutschmarks. It’s almost as hard to account for all that money as it is to count the number of times that Saeb Erakat has quit as chief Palestinian negotiator.

Moshe Yaalon: Bogie is proving to be the most clear-eyed and steady politician in cabinet. While everybody else is running around scared of an impending “diplomatic tsunami” whereby Israel could be branded a “rogue state” for being on the wrong side of the international consensus on both the Iranian and Palestinian issues, Bogie is calm. When Tzipi Livni screeches “gevalt, we’re going to be boycotted” and drives for Israeli withdrawal from Judea and Samaria, Bogie Yaalon responds logically that “In life, everything is a question of alternatives. If the alternatives are a European boycott, or rockets from Nablus, Jenin and Ramallah on our strategic front, and on Ben-Gurion International Airport – then indeed a European boycott is preferable.” Let’s hope that Yaalon holds firm.

Moshe Kachlon: The Likudnik who brought down cell phone costs, plans to cash-in on his popularity, on simmering social-economic discontent, and on disenchantment with Yesh Atid. He’ll be back this year with a new political party, accompanied by trade unionist Ofer Eini, economist Manuel Trajtenberg, Generals Gabi Ashkenazi and/or Shlomo Yanai, and other prominent figures. Netanyahu, Lapid, Herzog and Deri should be worried.  Israelis love new political parties, and Kachlon’s fresh lineup could tap into public disgruntlement with alacrity.

Shimon Peres: This wily ninety-year-old plans to come roaring back into Israeli politics when his term as President of Israel ends this summer. He will set himself up as a shadow prime minister to fervently advance his plans for peace with the Palestinians. He will convene international conferences to wedge Netanyahu against the wall, and cobble-together new Israeli political slates to challenge Netanyahu at the polls. Expect no more of the namby-pamby Peres-sponsored “Tomorrow” conferences, where “bold” entrepreneurs, “provocative” sexologists, and “prominent” European intellectuals talked mumbo-jumbo about “bottling the Jewish genius” and “generating the leaders of tomorrow.” Instead, expect an aggressive, focused Shimon Peres with a killer-instinct, out to remake the Middle East and save Israel – as only he can.

Natan Sharansky: By dint of personality and experience, in deference to Zionist history, and to boost global Jewish unity – Natan should be the next President of the State of Israel. His election should be a slam dunk. Alas, Silvan Shalom of Likud and Binyamin (Fuad) Ben-Eliezer of Labor each have better chances of getting the necessary votes in Knesset to become president, because of narrow political calculations. Silvan’s election would free up three ministerial portfolios (Regional Development, Negev and Galilee, Energy and Water) for other Likud MKs. Fuad can pull-in votes from across the political spectrum, including the Center, Left, and Arabs. Too bad. I’m still rooting for Natan.