Time for something different. Here is my review of Rabbi Ari D. Kahn’s book series, Echoes of Eden, containing intricately-complicated essays on the weekly Torah reading. The author delves into the mystical Rabbinic premise that the actions of our Biblical forefathers created spiritual scaffolding and patterning that impact on our lives in the present and future. 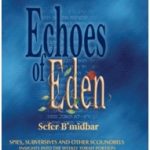 What is it that connects the shoes which Joseph’s brothers bought with the 20 talents they received for selling Joseph into slavery, to the shoes that Moses removed from his feet at the burning bush? And what connects these to the shoes that the Israelites were instructed to strap on as they waited for redemption on the night before they left Egypt, and to the shoes of the ugly halitza ceremony (when a man refuses to marry his deceased brother’s childless wife, and carry-on the family name)?

Rabbi Ari D. Kahn seeks to answer such cryptic questions in his intricately-complicated essays on the weekly Torah reading.

His method rests on plumbing mystical glosses and less-well-known kabbalistic commentaries on the Bible, alongside traditional commentaries, and eliciting over-arching themes that cross chapter boundaries. In doing so, he teaches us how the Bible has recurring, emphatic moral themes.

Kahn’s book series is appropriately entitled Echoes of Eden, since Kahn finds traces of Eden’s evil snake venom or the serpent’s shedded skin in many, if not most, of the Biblical episodes from Genesis through Numbers. Likewise, Kahn finds echoes of cosmic love and spiritual attraction that trace back to the first union between Adam and Eve – in almost every weekly Torah portion.

On the ladder of Jacob’s dream in Bet El, Kahn finds dancing angels, whose kinetic movement teaches us how to build a home of Godliness, defeat melancholy, and rebuild Jerusalem. He connects sulam (ladder) with Sinai (the mountain and the revelation) and shidduch (matchmaking) to combat the poison unleashed in human history by the demonic angels that stem from Eve and the snake, and to overcome the bewitching powers of the tainted serpent skins that serve as dictatorial clothing for Nimrod and Esau.

Kahn connects Joseph’s coat of many colors to the atonement of the High Priest in the Temple, to the Biblical prohibition of shaatnez (mixing flax and wool in a garment), and to the tragic sibling stories of Cain and Abel, and Amnon and Tamar; and to the almost-adulterous trespassing of Joseph and the wife of Potiphar. In all cases, he discerns the sacred powers of clothing, unleashed or abused.

In his newest volume – examining the book of Numbers (B’midbar) and provocatively subtitled “Spies, Subversives and Other Scoundrels” – Kahn connects Korach’s sly rebellion against the ultra-modest Moses to Reuben’s bedroom rebellion against his father Jacob, to the sale of Joseph into slavery, and to Miriam’s mutterings against Moses.

He links Korach to the sins of Cain and King Saul, and to the teachings of the Kotzker Rebbe. He contrasts the Machiavellian machinations of Korach and the twisted ambitions of Datan and Aviram to the burning and honest spiritual desires that consumed Aaron’s sons, Nadav and Avihu. He connects the maladjusted seer Bilaam to Jacob’s uncle/nemesis Laban, and Abraham’s silent donkey to Bilaam’s talking one.

Kahn also finds parallels between today’s debates over the service of Haredim in the IDF, to Moses’ devastating moral attack on the tribes of Reuben and Gad, who wanted to hang back in Transjordan.

A student of Rabbi Joseph B. Soloveitchik, one of the greatest thinkers and rosh yeshivas of the twentieth century, Rabbi Kahn today directs foreign student programs and lectures in Jewish studies at Bar-Ilan University. Aish Hatorah first brought Kahn’s highbrow and exhilarating essays to public attention through its broad-ranging website.

Kahn’s writings are not for everyone. They require a willingness to fly rapidly and almost haphazardly with the writer across Biblical texts, through far-apart centuries and divergent scholarly disciplines. They make sense only if you accept the mystical Rabbinic premise that the actions of our Biblical forefathers created spiritual scaffolding and patterning that impact on our lives in the present and future.

But if you are prepared for something new, Kahn ranks right up there with the likes of former British Chief Rabbi Lord Jonathan Sacks, Rabbi Dr. Benjamin Lau of Beit Morasha College, and Rabbi Dr. Yonatan Grossman of Herzog College in the originality and depth of his commentary.

PrevPreviousA good deal for the Bedouin, and for Israel
NextWashington’s sanction contradictionsNext