Israel: The Bright Side of Life

A net assessment of the strategic situation leads to the conclusion that Israel is winning on all battlefronts.

Given the acute Iranian threat to Israel, the perpetual Palestinian conundrum, the unstable regional situation, and Israel’s very many internal disputes and social ills – it’s easy to be an unrelenting pessimist.

But recently I have forced myself, Monty Python-style, to “look at the bright side of life;” to pointedly pay attention to the good things Israel has going for it. I’ve come up with an astonishingly optimistic strategic assessment regarding the long-term fortunes of the State of Israel.

I was forced into this positive posture by a request from the Mizrachi Organization of Canada to give a series of lectures in Toronto in support of aliya; in defense of the Zionist ideal which sees the world Jewish community moving to and helping build the modern State of Israel.

Preparing the lectures was a useful exercise in reinforcing a sense of pride in Israel’s achievements and wonder at its successes. It was a useful exercise in countering my natural tendencies towards seeing doom and feeling gloom. It was an opportunity to count my personal and our national blessings. It was an opportunity to coldly evaluate Israel’s strengths versus our enemies’ threats.

In my final tally, Israel comes out way ahead: Way head of its Western counterparts, way ahead of its adversaries, well ahead of its detractors, and well positioned to overcome all its challenges, big and small.

The bottom line is that Israel is a tremendous success story, in so many ways; that life in Israel is full of meaning and delight – adorned by sacrifice, commitment, achievement and joy – all the components that make life satisfying and exciting, and certainly so for a Jew.

Moreover, I am convinced that in overall perspective Israel is stronger than any of its enemies. I furthermore find that Israelis are neither crushed nor dispirited by their challenges. Even though Israelis worry about the future, they remain quite resilient and energized to build an even better future.

Despite all the naysayers, despite the boycotters, detractors, radicals, and anti-Semites – Israelis are achieving, creating, producing, and advancing.

The source of this resilience? I think Israelis feel the power of history on their side. They believe that time is on Israel’s side. Most Israelis feel Divine Providence at their back. They sense that Israel is winning!

As for Israel’s security and diplomatic challenges, I believe that a dispassionate valuation of the foreseeable future leads to sanguine conclusions.

Major military threats to Israel have greatly diminished, as Arab societies and armies crumble across the Middle East. Soft power attacks on Israel – things like international campaigns to divest from Israel and to sanction Israel – have mostly fallen flat. The Europeans, the Chinese, and everybody else are lining up to buy Israeli technologies, not to boycott them. Palestinian attempts to prosecute or confront Israel are a nuisance and ongoing, but they are mostly empty threats, as the Palestinians are in disarray and deeply divided. The dramatic weakening of America and the US-Israel relationship under President Obama is of grave concern too, but this is temporary and reversible. And for Israel’s major challenge – the peril of an Iranian nuclear bomb – that too will yet be dealt with, I believe, quite firmly.

All the above are serious problems, but manageable problems. They will not detract from Israel’s drive to succeed ever-more in all aspects of life.

In drawing-up and delivering this very rosy appraisal to audiences in Canada, I talked about things like Israel’s outstanding science and top-notch technology; its brain scientists and rocket missile scientists; its Nobel Prize winners; its first-class doctors and world class health care; its leadership in satellites and missile defense; its robust economy and strong currency; its innovative water desalinization programs and newly-discovered, massive natural gas resources; its outstanding universities and leading yeshivas; its super-vibrant social assistance sector; its humanitarian missions abroad; and most of all, the activism and high motivation of its magnificent youth.

All this and more leads me to declare a very positive net assessment. Israel’s future is bright, and it is a great thrill to be part of this grand adventure.

This week, Hillel Halkin’s iconic 1977 book, Letters to an American Jewish Friend: A Zionist’s Polemic was republished. This masterful volume, long out of print, is an ardent and closely reasoned rejoinder to an imaginary friend’s defense of Jewish life in the Diaspora and his rejection of aliyah. Halkin’s impassioned argument for the Zionist solution, for aliyah to Israel, remains spot-on, and new edition should be required reading in all Diaspora Jewish high schools.

One brilliant paragraph from Halkin’s introduction to the new edition of the book sums it up:

(“Israel is) a great adventure. I wouldn’t have missed it for the world. There’s been nothing like it in human history. A small and ancient people loses its land and forgets how to speak its language; wanders defenselessly for hundreds, thousands, of years throughout the world with its God and its sacred books; meets with contumely, persecution, violence, dispossession, banishment, mass murder; refuses to give up; refuses to surrender its faith; continues to believe that it will one day be restored to the land it lost; manages in the end, by dint of its own efforts, against all odds, to gather itself from the four corners of the earth and return to that land; learns again to speak the language of its old books; learns again to bear arms and defend itself; wrests its new-old home from the people who had replaced it; entrenches itself; builds; fructifies; fortifies; repulses the enemies surrounding it; grows and prospers in the face of all threats.” 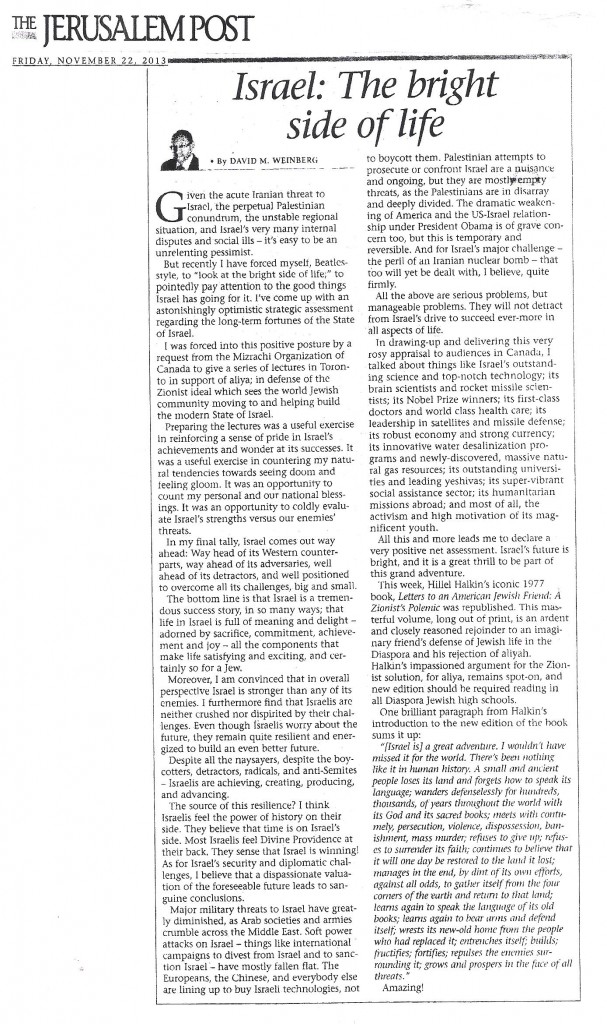 PrevPreviousWhy are we feeding Palestinian terrorism?
NextThe Geneva Accord: A Tale of Two Clashing PerspectivesNext