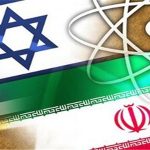 The Forward’s J.J. Goldberg complained in a column this week that Prime Minister Netanyahu “scared” Diaspora Jewish leaders at the JFNA General Assembly in Jerusalem with “exaggerated” depictions of the threats Israel faces from the impending Geneva nuclear deal between the West and Iran.

“Netanyahu’s evident intention,” Goldberg laments and mocks, “was to get Jewish activists to put pressure on Washington to harden its terms in advance of renewed talks with Iran later this month.”

Goldberg goes on to disparagingly explain to his readers that “Israeli leaders have a long tradition of plying American Jewish activists with extreme, often exaggerated depictions of the threats Israel faces in order to maximize the pressure the alarmed activists will then exert on Washington on Israel’s behalf. It’s usually done more subtly, though, and in closer adherence to the truth.”

The arrogant Goldberg explains that Obama is far wiser than Netanyahu. Obama is smartly “pursuing a strategy that can maximize pressure on Iran, while minimizing the odds that the extraordinary coalition the President has carefully assembled, which includes China and Russia along with the traditional Western European allies, will collapse.”

Goldberg continues to sneer at Netanyahu, smugly noting that “applause was light during most of Netanyahu’s speech, and standing ovations, a standard gesture during this sort of appearance, were entirely absent except the obligatory one at the end, despite the fact that Netanyahu pushed hard on all of his favorite buttons.”

Fortunately, Netanyahu’s bad-manners and truly downbeat act was immediately followed by a performance of Israel’s Batsheva Dance Company, “which appeared to lift the audience’s mood from the gloom of the prime minister’s message.”

THANK G-D, for the Batsheva dancers! We wouldn’t have wanted to leave American Jewish leaders with any sense of heavy foreboding about the real and imminent dangers that Israel faces from Iran, or with any over-the-top concern about the deleterious policies of their beloved President, Barack Obama!

We wouldn’t have wanted, Heaven forbid, to burden American Jewish leaders with the thought that perhaps Netanyahu is not exaggerating, and that all Israelis are gravely concerned about Obama’s drift towards a grand civilizational deal with the Iranians, at Israel’s expense.

Unfortunately, I fear that many American Jews indeed left their ‘feel-good-about-ourselves’ General Assembly in Israel without too much apprehension about Iran or about Obama. Like Goldberg, they sloughed-off Netanyahu’s attempt to rouse them from their stupor. They ignored the attempts to galvanize the US Jewish community into action in order to ward-off policies that will be bad for both America and Israel alike.

No Jewish leader at the GA tabled an urgent action item for debate about Iran or proposed a resolution invoking history and global Jewish responsibility to call for emergency mobilization of the community back in the United States.

Only Abe Foxman, national director of the Anti-Defamation League, called Netanyahu’s call to action “eloquent,” noting that “we are entering a period of time that may be the most dangerous the world has seen since the fall of the Berlin wall.” Himself seemingly in despair about American weakness and Jewish community irresponsibility, Foxman is left with “hoping that France, Saudi Arabia and Israel can rise above past differences to bring the international community back to sane policies in the face of the threat of a nuclear Iran.”

In fact, Foxman is the only American Jewish leader with the guts to say what policy analysts in Israel have worryingly discerned for some time: That developments with Iran seem to reflect a weakening of American resolve, a desperation to find a solution (maybe any solution?) in order to avoid military conflict with Iran, and a hesitation, at best, about America’s continuing leadership in the world. He is the only American Jewish leader I have heard explicitly defend Netanyahu against the charge of “warmongering” regarding Iran.

SO YOU HAVE to wonder: Do American Jewish leaders have a well-substantiated situation assessment that is different than Israel’s? After 25 years of an Iranian drive towards obtainment of a nuclear weapon and decades of Israeli warnings, are they not aware that Teheran is now 95 percent of the way to completing a bomb; that Iran needs only a few months’ time to ‘break-out’ and craft a nuclear weapon; that Iran is already a nuclear threshold nation?

Do American Jewish leaders really have a solid, more sanguine assessment of where President Obama is going with regards to Iran (and with regards to pressing Israel into creating a “whole” Palestine in line with the fullest of Palestinian demands)?

Do they not realize that Obama apparently seeks not to really block Iran’s incipient weaponization, but rather to mend fences and strike a partnership with Iran, as Tom Friedman made the strategy plain in The New York Times this week? Do they not comprehend that Obama is planning to use his politically-invulnerable last three years in office to ram through transformative policies that will yank America’s place in the world and Israel’s place in the Middle East from their current foundations?

Did American Jews not discern during their week of much-ballyhooed “conversation and dialogue” with Israelis that all Israelis, not just the supposedly-hysterical Netanyahu, feel and fear that Obama is leading America towards Iran and away from Israel?

I assume that American Jewish leaders must see some of this. I suppose that they must have some inkling of the deep trouble and crisis ahead. I imagine that they must understand the corner that Israel is being pushed into.

And if that’s the case, then we in Israel are left with following questions: What will it take to rouse American Jewry into action? And, is there any oomph left in the organized American Jewish community in order to go to bat for Israel (and for America) when the chips are down, now? 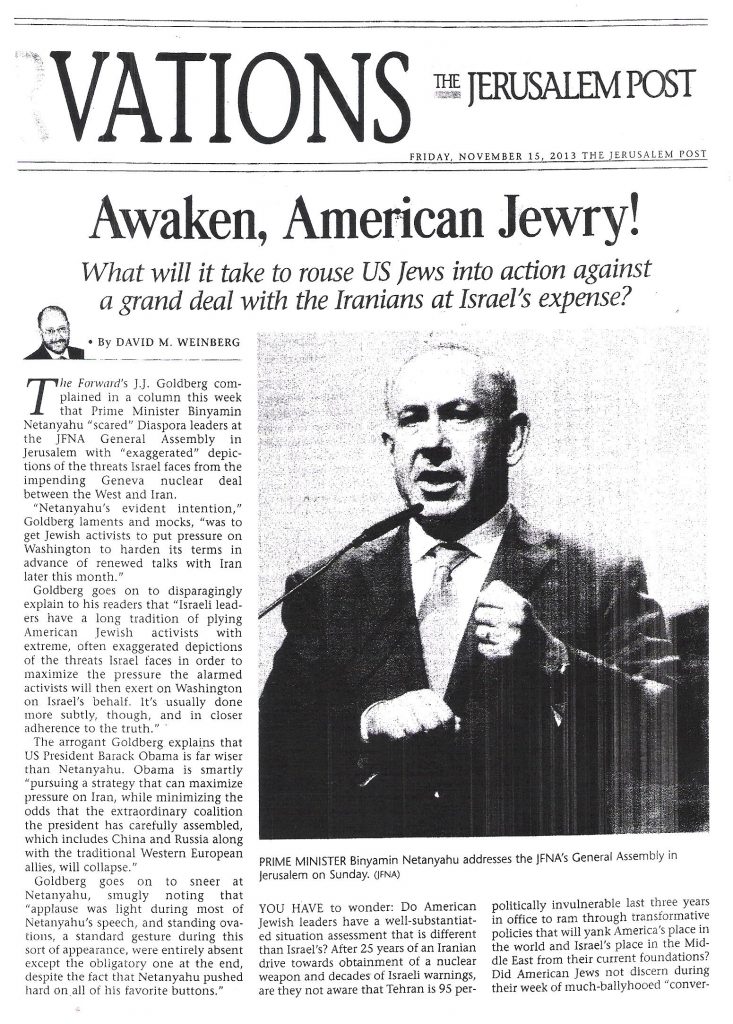